In the history of military development all around the world, one of the most interesting and unique war devices ever conceived was the turtle ship - a large warship used by the Korean army to defend their waters from successive invasions attempted by Japanese forces. Today the turtle ship is a relique reserved for museums, but it was very active from the early 15th century up until the 19th century. Many different versions of the these ships existed but in general they were about 30 to 40 meters long, with the "turtle" name owing to the hull that was placed on the top of the ship. On the bow of the vessel a dragon head was mounted, and it was large enough for a cannon to fit inside. The dragon head served as a form of psychological warfare, with the aim of striking fear into the hearts of Japanese sailors.

Space Turtle Battleship puts the player in control of one of these war vessels, but instead of cruising through open sea it flies and eventually ventures into outer space. The game was only released in Korea, and is without a doubt not only one of the rarest Mega Drive games but also one of the least known shmups in the system. Since it is a localized effort, everything in the game is written in Korean, but this fortunately doesn't get in the way of what really matters, which is shooting and blowing up stuff. One of the most notable features of the game is how this "stuff" is presented. The graphic design is highly schizophrenic, going from an initial pre-historic setting to ancient villages, fireball storms over a ravine, cities patrolled by tanks, high speed chases, big battleships, outer space bases and computer circuit boards. Judging by how this design is arranged, would it seem that Samsung was aiming at a story timeline that covers several stages in the evolution of mankind? Or would the story involve some sort of time travel? Too bad my knowledge of Korean is as real as teeth in a parrot's beek... 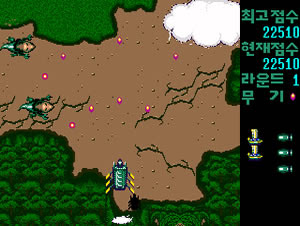 Beware of my turtle flying power, you stinky slimy lizards!

Following an introductory sequence, the turtle battleship takes to the skies armed with two switchable weapons: a forward spread shot and a secondary weapon capable of also shooting left and right. All power-ups are released by a floating head carrier, and both weapons are powered up at the same time when the appropriate icon is obtained. Once you reach maximum power, further power-ups will upgrade the ship and change the weapons completely in two different stages: in the first upgrade, spread shot turns into a forward/backward yellow circle launcher, while side shot becomes a powerful forward thick laser; in the second and final upgrade, the circle weapon will change into wave shot, and the thick laser will turn into a blue shuriken spider-pattern. Each new form of the ship awards the player with a 1-hit shield, so that getting hit by a bullet will only downgrade the ship (and consequently the weapons) to its previous form instead of killing it. Bulky in size, the battleship is fortunately never overwhelmed by enemy bullets in an unfair way, but cheap deaths can occur from enemies coming from behind.

The bomb has a limited radius blast and works like all regular smart bombs, with a minor but interesting twist. It's possible to guide where it will explode by keeping the button pressed and releasing it where the bomb should detonate. That's especially useful during boss battles. Bombs are replenished through icons, which can also appear in the form of speed-ups, temporary shields and extra lives. Since the maximum speed doesn't make the ship too fast, it's perfectly fine to get all incoming speed-ups. That's also encouraged by the fact that all surplus speed-ups and power-ups are worth 5.000 points each, which is not bad at all for scoring. Milking some bosses is feasible by destroying their guided missiles, lasers and fireballs, and the coolest thing here is that every boss has a health counter so you know exactly how long it is taking for them to die.

In general, there isn't anything really special about the graphics in Space Turtle Battleship, and that can also be said about the music, but the main charm of the game - despite everything related to its rarity - consists exactly in how it mixes so many different graphical concepts into just one package. The overall style owes a lot to previous shooters of the era, and experienced players will definitely recognize rather explicit nods to Compile's M.U.S.H.A. or to Toaplan verts such as Twin Cobra. The last stage, for instance, is as much a reference to Darwin 4081 as it is a precursor to the shmup stage found in the late Segagaga Dreamcast hit.

Since it's not too punishing and it also gives away lots of extra lives later in the game, Space Turtle Battleship can't be classified as overly difficult. However, just as in Truxton, dying repeatedly keeps sending the player further back in the stage. There are three difficulty levels available, with unlimited continues that allow you to resume at the current checkpoint instead of starting the level all over again. Stages themselves are strangely numbered: there are officialy eight, but six of them are divided in two areas, with all areas basically sharing the same length and having unique bosses (bosses are a bit repetitive and generic, and that's probably the weakest aspect of the game). In the end, what you get is a whopping number of 14 stages to go through until you can accomplish the mission, which is mildly entertaining and worth a look if you're into shooters.

I was able to 1-life the game, but in the run I did for the video above I died once and got a higher score. Here's a frozen frame of the video for posterity (played on NORMAL): 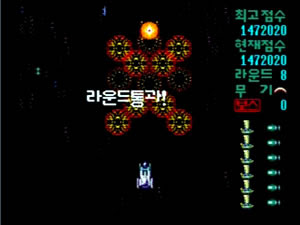 Note: this text was cross-posted with minor changes on Sega-16.
Posted by Edward at 7:28 PM