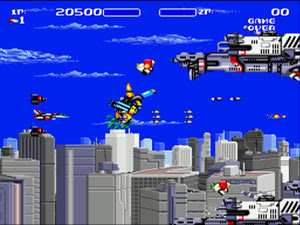 Absence of gravity lasts until the boss of stage 5, when you re-enter a closed environment in order to play the rest of the game. That’s not much of a refresher because for the most part the Death Circus (stage 6) is an exercise in precise positioning through a moving maze.

In order to deal with all the baddies, the jet must be powered up. Though they might appear floating for free pick-up, most power-ups are released in groups of five items by destroying a chunky orange carrier. The player has to be quick to get the desired items because they fall off the screen very fast. Getting the best icons doesn’t come easily, so it will only get natural after a bit of practice. The main one is P (power-up), followed by the icons for secondary attacks/features: S (side fighters), R (rear shot), red M (straight missiles), green M (homing missiles), 6 (6-way shot), H (revolving turret), B (bumper, essential during the fast tunnel run in the 2nd stage) and $ (points). There’s also the chargeable "buster" flash (activated with buttons A or C) that disintegrates on-screen bullets and popcorn enemies – although weak and seemingly useless it can be very handy in certain situations, such as the glut of heat-seeking missiles in the last stage. There are no speed-ups, and the only extra life is gained upon reaching 200.000 points.

Air Buster is fun and addictive, as long as you can cope with the tricky challenge factor of later stages. Co-op play is possible, and it's just as fluid as when you're playing solo, with no slowdown or noticeable flicker at all. Compared to the PC Engine port the Mega Drive version of Air Buster seems to be the superior game, both in graphics and sound. There's a weird thing in the Mega Drive port though: it has a kind of short delay every time a stage starts, as if it was actually “loading”. Thankfully it’s nothing gamebreaking. 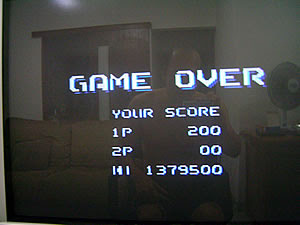