There are games that have such a bad reputation that you almost feel guilty when you take them out of the box/case to finally try them out. It’s almost as if you’re commiting a crime or something, like “don’t let anybody see you doing this or else you’ll get flamed for being such a retard”. With so many good titles lying around, why would anyone want to play something like Planet Joker? Masochism, variety, guilty pleasure… All of these factors come into the mix, but in the end it all boils down to just one thing, at least for me: this game is a shoot’em up, and as such it deserves to be loved.

But alas! The fact that I love shoot’em ups doesn’t mean I love Planet Joker!

Naxat soft was a big name in the first half of the 90s, especially for PC Engine owners. Unfortunately, this game is a clear demonstration that their brand would never be the same starting from the 32-bit era. It is simply regarded as the worst shooter in the Sega Saturn library, a distinction that’s almost unrivaled and shows how the genre still wasn’t ready to embrace full 3D graphical rendering. The saddest thing is that this isn’t the only bad thing about Planet Joker. There are also the disappointing low-res cut scenes, loading times that are far from acceptable and a handful of weird functional traits that only serve the purpose of annoying the poor soul that for whatever reason decides to play the game. Since I had the guts to do it, you can take it from me when I lay down the facts about Planet Joker. 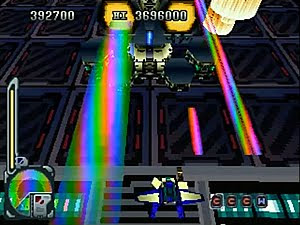 Wow! What a big laser you have!

The game plays in a vertically tilted orientation, very close to Silpheed. There are times when it tilts less or more, depending on the enemy you’re facing. Everything is rendered with polygons in a 3D environment, from popcorn enemies to bosses to backgrounds, with extremely underwhelming results. I believe the speed of the game contributes to this bad impression, beause if it moved faster and with a better framerate the poor graphics could be duly forgiven. Thus the real experience is that of a broken, ugly, unpolished and at times unfinished game that for some unbelievable reason got greenlit for release. It’s evident that Planet Joker carries an epic feel that’s ultimately unmatched by the game itself, with a general design that evokes old anime series such as Gloizer X.

After choosing one out of seven huge available robots, the player must go through seven stages of rather repetitive action. The mecha characters differ in power, speed, defense and “charge”, which is certainly related to how fast the shield function recharges after being used. This shield makes the player invincible while active, and can only be used again after the shield bar has been fully recharged. Another special attack is the bomb (C for a radius detonation and W for a straight wave attack), whose stock is replenished by appropriate incoming icons. The regular shot can be changed according to a power-up that comes down staggering and cycling colors (blue, green and yellow). I still don’t know what the 4th color (red) does, because it doesn’t change the weapon used and doesn’t seem to have any influence at all in the game. Lives are measured according to a health bar (again much like Silpheed), with sparse replenishers refilling 2 units of energy. Once this health bar is depleted it’s GAME OVER.

Most weapons in the game feel clunky and awkward. Three power-ups will max out the robot’s weapon – there seems to be some autofire after you pick the first power-up, but it’s always better to tap the fire button for a more solid shooting rate. The end of stage bonus is based in destruction rate, remaining health (refilled in the next stage) and remaining bombs. All boss patterns are very predictable, which makes the game pretty easy once you get used to them, and if being easy is a redeeming factor for such an awfully crafted game at least you can say something positive about Planet Joker. Maybe a couple of the BGMs can be considered nice as well, but that’s it.

Beating the game will unlock Boss Attack mode to join the other two extra modes: Score Attack (3’) and Time Attack. According to the manual, there is a hidden 8th robot named Randall, but I have no idea how to unlock him. Not that it matters anyway. Some of the annoying factors I mentioned above are the intruding dialogue that takes place in several parts of the game (they can be skipped but are nonetheless bothersome), the fact that the score doesn’t reset when you continue and the impossibility to pause during boss fights. If you have to answer the phone, scratch your back, kill that annoying mosquito, drop an emergency turd or run for your crying baby during a boss fight you can pretty much consider your credit lost...

Planet Joker’s direct competition as worst Saturn shmup is Terra Cresta 3D. For a brief moment I thought of trying the latter right away, but I figured I’d had enough pseudo-3D crap for at least two months.

My 1CC run was done with the robot named Karshow, namely the most powerful one, and here’s the final score I got: 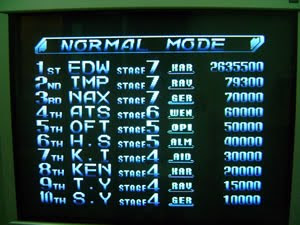