Espgaluda was one of first new shmups I was introduced to a couple of years ago when I started collecting video games. It is a Cave game, so back then I couldn’t help but be a little frightened by how it played. Eventually I got a little more experienced with Cave, and the time and necessary confidence finally came for me to face yet another bullet hell challenge. Coming after Ketsui and before Mushihimesama, Espgaluda is highly regarded among Cave fans for a number of reasons, such as the intricate scoring system and an assumed lower difficulty regarding the gameplay. Since I had to struggle a lot more than I had initially thought I would, I don’t agree with this second reason at all...

This game is supposed to be a prequel to Esp Ra.De., released in 1998. In both games the characters possess extrasensorial powers, hence the “Esp” in the titles. Gameplay similarities, however, are kept to an absolute minimum. The story in Espgaluda seems to be as convoluted as the gameplay, so I’ll recommend this article if you want to know more about it. What we need to know is that there are two playable characters: Ageha (the guy) and Tateha (the girl). Ageha has a straightforward shot pattern, whereas Tateha’s firepower works in a spread fashion. My feeling is that Ageha is best for scoring, while Tateha is best for survival.

Diving into this game isn’t such a big deal. If you want, just shoot everything down and enjoy your blasting fun. Learning how to score properly is a very complicated story though. Both Ageha and Tateha behave equally, and as in almost all Cave games they have a regular shot (button tapping, autofire) and a concentrated shot/laser (button holding) that also reduces character speed. Killed enemies generate green gems that are automatically absorbed and added to a counter (maximum of 500). And what do you do with these gems? You use it to fuel the famous Kakusei mode. Upon activating Kakusei, the character switches gender (Ageha turns into a girl and Tateha turns into a guy), the green gem counter starts decreasing and all enemy bullets will become pink and travel at a slower speed while the player behavior remains unchanged. Bullets from all killed enemies are converted into points and enemies are turned into gold, which is automatically absorbed and added to a secondary counter (maximum of 1000) that’s used as a score multiplier. Every killed enemy will also make the green gem counter deplete at a faster rate. 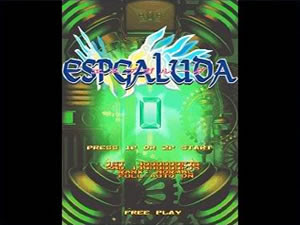 Espgaluda's start screen on the PS2

It’s possible to activate and deactivate Kakusei at any given time, regardless of the amount of green gems you have. However, when the green gem counter is empty, Kakusei will turn enemy bullets red and make them travel faster than normal, in what’s called Overmode. Overmode doesn’t turn bullets into points but does generate gold from destroyed enemies, with 4 stages of bullet acceleration and score increase (indicated by the circle around the character). The last type of attack available is the Barrier, whose stock is given by the green bar at the bottom of the screen. Pressing the barrier button makes the player invincible and involves the character in a ball of energy that starts increasing in size. Releasing the barrier button then unleashes a powerful forward laser - the larger the energy barrier ball the bigger the damage. Each barrier bar can provide 4 of these attacks if the barrier button is just tapped, so it counts as 4 smart bombs. One last thing: whenever the player is in Kakusei mode, getting hit will activate the barrier automatically at the cost of half the barrier energy bar.

So where’s the catch? Where’s the secret to big points? Simple: it’s not just a matter of entering Kakusei, melting bullets, getting back to normal and repeating the process. The longer you stay in Kakusei mode, the higher the value of the destroyed bullets. When you see those ×100 point tags you know you’ve reached a situation of scoring frenzy. In order to achieve this, a few things must be kept in mind besides the mandatory positioning and timing: (1) in Kakusei enemies also shoot more bullets, so it’s good to enter Kakusei mode and wait until you have the highest bullet density in order to take enemies down; (2) larger enemies should be weakened to the brink of destruction in normal mode and only then killed when in Kakusei; (3) popcorn enemies must be eliminated in normal mode and whenever possible avoided while in Kakusei, so that you don’t waste that precious stock of green gems.

Main shot is powered up with the P icon (get 5 for maximum), and barrier energy with the E icon. Extends are given with 4 million and 14 million points, and an extra life can be taken at the end of the 3rd stage if you destroy a particular chest while in Kakusei (not Overmode). The longer you stay alive and the higher you score more enemies and bullets will be thrown at you. This rank progression is rather subtle and is reset if you die. Dying takes 1/3 of the gold counter and returns you to the default power, but at least you can grab the scattered power-up icons, getting 250 green gems as a consolation prize.

As you can see, Espgaluda isn’t properly a "pick up 'n play" shmup. Sure the first couple of stages are quite easy, and Kakusei can make things easier at the cost of a decent score. If you’re at least a little like me though, it will be hard to ignore scoring. And this takes time to learn, believe me. Despite all the expected intensity and strategy-laden scoring techniques, everybody agrees that the most memorable aspect of the game is by far the last boss, definitely one of the most epic final bosses ever designed in a shmup. It just seems the beast won’t die! To make matters worse, in his last form barrier attacks increase his health instead of taking him down!

Pastel shades in a colorful design are what defines the graphical style in Espgaluda. Explosions are massive, and from what I heard the PS2 port is an excellent conversion of the arcade original. The music leans towards techno and fits the gameplay well, but it doesn’t really shine when listened out of the game’s context (like in Milestone’s Chaos Field). The PS2 release is packed with extras, the main ones being a special Arrange mode (with way more bullets and selectable characters that behave just like the ones from Esp Ra.De.) and a second DVD with two complete superplays. The game itself has some nice arcade mode replays that allow override and can be used for practice. These are all great tools to learn how to score properly, even though it’s really hard to pull off those strategies.

I have a suspicion that Espgaluda is an acquired taste, even among bullet hell admirers. I liked it, but not in the same level as, for instance, the marvelous Mushihimesama. Also I didn’t perform as well as I wanted, but the 1CC goal was achieved (Ageha, NORMAL) and it’s time to move on to the next challenge. 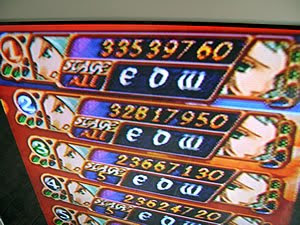 Espgaluda II on the Xbox 360? I still have a lot to learn before I try that one!
Posted by Edward at 9:23 PM