Dear readers, this extra post celebrates 100 blog entries for shmups I have 1CCed!
84 of these were brand new 1CCs, whereas in 16 I just went for a new high score in previously 1CCed games.

Let's now freeze time and take a snapshot of some blog stats. 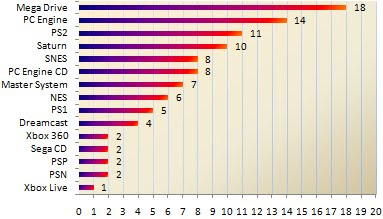 Top 5 hardest 1CCs, in no particular order:
The above games either demanded an extended time span to be properly learned or were just more brutal than others in their difficulty. In one of them I think I was really lucky and actually got the clear before I was supposed to. Can you guess which one it is?

Top 5 easiest 1CCs, in no particular order:
Two of the above games were beaten in just one quick sitting. They're all so easygoing you might finish them without a single hint of sweat.

And below is a special picture for my somewhat messy albeit very functional game setup. This is where all the action happens! 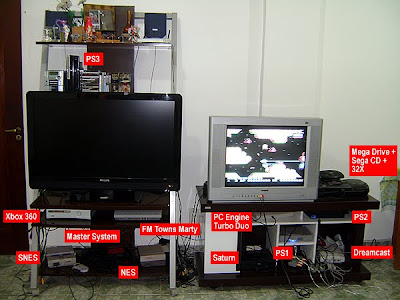 Tell me if you have a game in mind you'd like to see me try. I promise I'll consider anything from my personal collection, as long as it has an ending and you don't mention stuff like DoDonPachi Dai-ou-jou!
Posted by Edward at 11:50 PM