On the matter of games that hit the market with new, fresh ideas, RayForce is certainly one of the most mentioned. It is a natural evolution to the seminal style created by Xevious, where besides the main regular shot the ship is also capable to hit ground targets with a secondary weapon. RayForce's contribution lies in the generally named "lock-on" system, which allows the player to lock on multiple enemies and then unleash a single attack to damage them all. Although rather common place by today's standards, this was a quite unique feature back in 1993, when the original arcade machine was released. It was so endearing that its influence can be easily noticed in future titles, such as Raizing's Soukyugurentai.

Layer Section is the same as RayForce - the title was altered due to some obscure reasons upon release on the Japanese Sega Saturn. It would be again renamed as Galactic Attack for North American audiences, and it also bore the alternate title of Gunlock in European arcades. What a mess, really! If you stick to Taito's original arcade designation, the right name should indeed be RayForce, also having in mind that its sequels carry the "ray" part in the title as well. While RayForce saw an exclusive port for the Saturn as Layer Section, the sequel RayStorm was published for both the Saturn and the Playstation, with the subsequent prequel RayCrisis seeing the light of day only on the Playstation. Here's some more mess for us shmup fans to deal with! 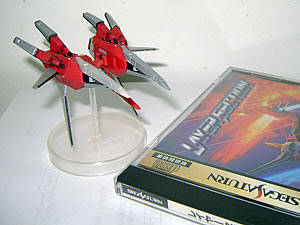 Aided by a nearly flawless execution, the whole idea behind the gameplay in Layer Section is irresistibly enticing. You have great 2D sprite work with excellent effects from start to finish, shit loads of multiple parallax levels (which is unusual for vertical shooters) and two layers of action - that's where the Saturn name for the game certainly comes from. The classic outer space setting immediately sucks you in, leaving you in awe and sheer anticipation for what's to come in later stages. Soon enough you learn that regular enemies are dealt with in the same plane as the spaceship. On the other hand, enemies located in the lower/deeper layer, such as tanks, bombers and all kinds of emerging threats, have to be targeted with the lock-on crosshair. Needless to say, the more enemies you have locked when you unleash the laser blast, the higher the score achieved. You can lock on to any on-screen target in the lower layer, but all lock-ons last for only five seconds. After that the lock-on is lost, so it's not always easy to get the maximum number of lock-ons for bigger points.

Initially you can lock on to a maximum of five enemies, but after getting the appropriate power-ups this limitation soon maxes out at eight. The main gun is powered up with red and yellow items. Three reds are needed to upgrade one power level, while only one yellow will upgrade one power level instantly. Maximum power is reached when the shot gets thick red. Surplus power-up items increase in 1.000 steps until they max out at 10.000 points each. During most of the game all power-ups are brought by floating harmless carriers or by destroying red colored enemies. Dying reduces only one level of each weapon, and the two available extends are obtained with 500.000 and one million points.

And that's it for gameplay. It's by all means pretty basic and pretty straightforward. In the land of Layer Section, however, appearances can be deceiving, and it doesn't take long for anyone to realize that this game is cruel. It's actually evil because it lures you into a situation where winning is an option for which the game will fight with you until the very last drop of blood you have in your shmup veins. In other words, be prepared for a fierce, almost unfair rank system. This is a tough beast to tame.

This is the control tower. Make a left turn. Over!
(courtesy of YouTube user assomo5)

One example of how tricky the game gets is if you play well enough to get both extends before the 2nd stage ends. Enemies enter a sort of overdrive mode where they will increase attack speed and ratio, in an exceptionally aggressive effort to bring you down. It's as if the game got angry at you. It's not like the subtle difficulty increase of most games out there, here the challenge spikes really fast if you try to score decently and if you don't die. Dying softens things a bit, but later on it doesn't matter, things will get tougher regardless of life stock. Halfway into the game you'll certainly miss those dear smart bombs that are so helpful in saving our asses when we get cornered, but here there's no easy way out. In order to avoid being taken by surprise or getting horribly cornered it's mandatory to get used to the large hitbox and to hone the abilities to tap, to herd and to safely point blank, with careful and meticulous study of boss patterns and enemy spawning criteria. In Layer Section it isn't enough to dodge, you have to know where to stand and how to overcome the game's elusive AI. And even then, this is one case where I firmly believe you should be in the "zone" in order to have a chance at seeing the end on one credit.

I briefly mentioned above that Layer Section's execution is nearly flawless. This statement derives mostly from the soundtrack. There's nothing wrong with the music, but at the same time it isn't as memorable as the other aspects in the game, such as the graphics. Another minor complaint of mine is that part of the color palette of the 3rd stage feels awkward and makes some enemy lasers hard to see. Otherwise there's no doubt that this is a solid and extremely challenging shmup. The Saturn edition is packed with a TATE option and also the possibility to rotate the pad, which turns the game into a horizontal shooter (yuck!). The soundtrack is remixed and the original arcade music isn't included (not much difference here, really). I did notice that some game details are different when played in YOKO, such as a few missing animations and a shorter gap for the crosshair. Note: to toggle the HUD on and off and play with a cleaner screen just press the L button.

And below is my proud 1CC high score for Layer Section, played on NORMAL (YOKO). For my skill level it was plain epic, I had to go through the whole last stage on my last life! 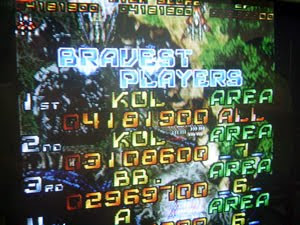