Getting exposed for the first time to the shooting genre these days can be a traumatic experience, simply because the bulk of the games being released is of the bullet hell type. Within this style, Cave is undeniably the master developer, and every neophyte WILL eventually come across one of its offers. For those who think they're too over-the-top and their games are impossible to get into, let it be known that the scenario wasn't always like that. Donpachi, Cave's first title, is a fine transition between the shooter of old and the dawn of a new era, namely the so-called "danmaku" or "bullet hell". Imagine the overall style of Truxton or Grind Stormer and spice it up with new elements and more dense bullet patterns. The similarity isn't a coincidence, for Cave was one of the offshoot companies to arise from the ashes of then defunct Toaplan.

As I wanted to warm up for Dodonpachi (the sequel), I returned to Donpachi two months ago on the Sega Saturn but I had an unpleasant surprise: my Action Replay cartridge died on me as I was about to reach my goal of 10 million points. After weeks of waiting for a new cart I was finally able to resume play, rejoicing to the massive lasering and the fantastic destruction rush this game is capable to provide. You only need to overcome the inexcusable loading times of the port, by far the biggest letdown of an otherwise great package. 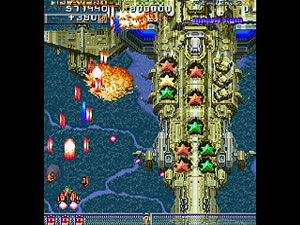 Type A ship wreaking havoc in the second stage of Donpachi

I mentioned above that Donpachi is a good example of the transition between old school shmups and the more cluttered, fear inducing danmakus of today. In the first couple of stages there's nothing really taxing about enemies and bullet count, but stage 3 starts giving some trouble. By the time the player reaches the 4th stage it's necessary to combine memorization skills (enemies come from below and from the sides without notice) with techniques such as tap dodging and bullet herding, with a growing concern about correctly placing the ship, squeezing that tiny hitbox between clouds of bullets and taking out some of the enemies as fast as you can if you want to stand a chance at surviving. In my opinion it's a perfect difficulty ramp, suited to those who're willing to get into Cave's portfolio without burning out on an overwhelming challenge level. But wait, don't go thinking Donpachi is an easy ride. You also have to consider its famous scoring system, which starts showing itself when those big numbers appear close to the score display.

The chaining system in Donpachi and its sequels is extremely simple yet hard to master: kill enemies in succession (intervals of approximately 0,5 seconds max) and the combo multiplier will rise. The first enemy killed is the most important in the chain, because its value is the one that will be multiplied by the combo counter. In busy sections the "aura" that surrounds the ship when you're firing laser becomes very important, since it kills all popcorn stuff and doubles the damage inflicted if you stay pretty close to the enemy. Unlike its sequels though, Donpachi doesn't have enough enemies to allow the player a stage-long chain, so it's mostly a matter of getting a series of combos in every level. That's why chaining in Donpachi is a lot less frustrating than in the sequel Dodonpachi, a game that almost made me peel my skin off in disgust whenever I tried to play for score years ago.

Besides all the innovation in the gameplay field, Donpachi is also a significant shmup as far as graphics and animations go. There's a great use of colors, an abundance of explosions and an overall sense of design that must have taken people by surprise back in the 90s. Another great asset is the bossy announcer and all his spoken messages, such as "keep your finger on the trigger, rookie" and "fire at will, kid, fire at will". I love it when he shouts "bomber" whenever I get a B item. He's the perfect match for the nice soundtrack, which has some of the best military-driven BGMs ever and highlights the gritty feel of the action. Unfortunately, as the series evolved the emphasis on manly military design would be left aside thanks to the loli characters introduced in the storyline.

Besides the problem of the loading times, the Saturn port of Donpachi is known to have a bit of slowdown (negligible) and more pixelly explosions, making it supposedly inferior to the Playstation version. However, it still kicks ass and is the best choice if you are restricted to playing in YOKO. Sure there's a TATE option included, complete with the possibility to rotate the d-pad and turn the game into a horizontal shooter. Lastly, a Score Attack mode makes it possible to practice specific stages. 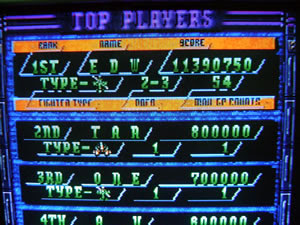