Exploring the world of video games is a fascinating hobby. The amount of distinct experiences to be had is neverending, but digging deep into the more obscure stuff often leads to bizarre discoveries such as Toilet Kids, a shmup that's all about toilet seats and turds of all colors and sizes. Behold the awesomeness of the HuCard cover, for that's the turd god you must ultimately defeat in order to leave the magical toilet world. But wait, I'm getting ahead of myself! How do you get there in the first place? Watch the intro to the game right after you press RUN: a sleepy kid seats on a toilet to take a dump, but suddenly he's sucked into it in a flash of light. Damn, this is no ordinary toilet at all.

If you're really into gaming, then you know that I'm stating the obvious when I say Japan can be a wicked place. The turd motif is fleshed out completely in Toilet Kids, making it one of the most bizarre games ever made. Though limited by the graphical boundaries of the system and marked by the cartoony design style, the resulting atmosphere successfully conveys an excrement-ridden world, so you can expect a few laughs and WTF moments as you plow through the astounding four stages of crappy fun (yes, it's that short). Kitsch? Bad taste? Any way you see it, it's undoubtedly unique. Unfortunately, Toilet Kids does not deliver on the aspect that matters most for us, which is gameplay. It's simple and straightforward, but it's also annoyingly stupid at times. 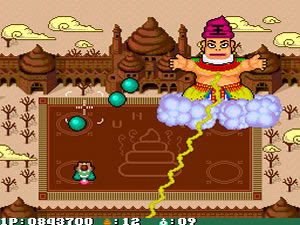 God of War is a pussy! Behold the jawsumness of the God of Crap!

After the nocturnal abduction, the kid acquires magical powers and starts flying on a toilet seat. There are initially five extra toilet seats for him to use, and when all of them are gone he apparently drowns in the world of poop down below. He's got a main weapon and drops ground shots in the exactly same fashion as in Xevious. If you hold down the main shot button for a little while a powerful charge blast will be fired upon its release. However, due to the constant stream of enemies coming from all sides I found this charge shot to be useless, it's much better to use the turbo function for continuous fire.

Practically all enemies will attack the toilet kid with some sort of turd ammunition. Monkeys, camels, spiders, bats, fish, turtles and other unrecognizable animals all attempt to shit on him while he's attacked by strange flying things such as slippers, turds, helicopters with butts farting all over the place, etc. Red balloons are the regular carriers for special items, and most of them give temporary effects such as a screen clearing bomb (the blue star), a magical toilet paper that cleans nearby enemies with spiralled attacks or an egg that works as a frontal shield. Items will also be uncovered by targeting specific poops with the ground shots (they blink when hit), and these will sometimes release extra toilet seats (lives). Another way to achieve extra lives is by destroying 40 of those golden, shiny small poops you see everywhere. Some of them are hidden and must be uncovered before being collected.

Looks funny, right? Well, I thought so for a few minutes.

What I haven't described yet is how power-ups work. They're there, but they're hidden. In order to uncover them you must hit certain areas on the ground so they will pop up. The power-up icon looks like a little bottle (maybe bleach?) and provides two very useful upgrade levels to the main shot (if you get hit you lose a life and your weapon gets back to its default condition). Now for the additional quirks: all items bounce once they're uncovered; shooting will make them bounce back, but the problem is that they often bounce off-screen and it gets really easy to miss them because of the sluggishness of the magical toilet seat you're flying; to make things worse, whenever you get hit you become invisible for a long time, so any item coming towards you will go by and get lost in the turd world. That's extrememely irritating, and if it happens just prior to the last boss you're pretty much screwed against the pair of evil planaria.

Toilet Kids isn't a hard game at all, but the power-up scheme is kinda retarded and leads to unfair situations. Most of the danger comes from the small flies hovering on feces - they disband and keep circling around as you get close to them, sometimes shooting from below and off-screen. Hidden symbols that can be uncovered with the ground shot give special score bonuses, so besides finding the power-ups this is another reason why you should be shooting the ground at all times.

Harmless and annoying, this game barely escapes being a total waste for its goofy art alone, which of course lends itself to being a good subject for geek talk. The greasy grain of corn on the turd's surface is the fact that there's no high score buffering at all in the game, and you can't even pause after you beat the last boss. The screen fades really fast, so I had to make special arrangements to register the high score below. You can take a peek here if you want to know what happens at the end of this shmup-crappy story! 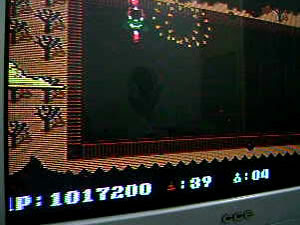