Some bullet hell shooters are really friendly towards the player on his/her first try. A classic example would be the DoDonPachi games, because they have simple controls that don't impose any heavy influence in a quick gaming session. And then there are bullet hell shmups that will teach you the meaning of rape on your first go. Game in question: Chaos Field. First Milestone shooter and, quite frankly, my favorite so far. A game that scares neophytes and doesn't want to make any friends. It floods the screen with bullets and leaves you dizzy with what seems to be a plethora of controls to manage. No, most people do not have fun on their first contact with Chaos Field. However, as intimidating and cruel as it is, the game does get addictive after a while.

Being a boss rush is what people seem to remember most about Chaos Field. Three bosses per stage (hereby named "phases"), with absolutely no cannon fodder. This departure from the norm creates interesting gameplay situations, all of which require strategy, memorization and a deep knowledge of scoring devices. Never mind the mildly washed out graphics, upon which some primitive textures (for Dreamcast standards) are applied. What lacks in graphical flair is more than compensated by the amazing techno soundtrack and a neat scoring system, a combination that's ultimately what drives me the most to enjoy a shmup. As its name implies, at first glance Chaos Field came off as a chaotic experience, so the first thing I had to do was find a comfortable controller configuration in order to start the journey.

Shooting is the main form of attack. Secondary firepower consists of a short-range sword, a lock-on attack and the "wing-layer", basically a bullet sponge that works as a shield. The last control input is the field shifter: upon the press of a button you switch from order field to chaos field and vice-versa (you'll know which mode you're on by the display below the score counter). Imagine two parallel realities sharing the same space. Order field is the starting/default mode. In chaos field the whole game acquires a red tint and enemy aggression doubles, but you get a boost in firepower and the lock-on shot is capable of locking on to bullets as well. You can't shift between the fields at will - a new shift is only possible after a few seconds, when a surrounding aura appears in front of the ship while you hear a subtle sound cue. 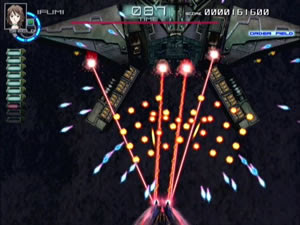 Ifumi gives some trouble to boss 1-3

Getting used to all these controls is no easy task, and it took me a while to do it. Bear in mind that the original arcade game has only three buttons, which calls for button combinations in order to trigger the special attacks. Fortunately the Dreamcast version allows mapping of all controls, and after trying out several configurations this is what I came up with: shot (A), sword (X), lock-on (B), wing-layer (R) and field shift (L). Once the control was set up, it was time to get used to the meta gauge, which is the fuel for lock-on and wing-layer. Each of these special attacks consumes one cell of the gauge. Destroying boss parts with the regular firepower or the lock-on will release meta cubes/sparks that get automatically drawn to the ship if you stop shooting for a split second, refilling the gauge. If the gauge is full the cubes will change color and add to the score, and if you lose a life you'll receive a small batch of meta cubes to refill the gauge.

The purpose of using lock-on and wing-layer attacks is to build up a multiplier combo. Every absorbed bullet and every boss part or bullet that gets locked onto adds to the multiplier. There is a timer that decreases whenever no bullets are being blocked or no bullets/boss parts are being targeted, and if the timer runs out the combo is lost. Therefore, the meta gauge must be kept filled so that you have enough fuel to keep the combo going (remember that bullets blocked by the sword don't count). Meta cubes are more easily obtained in order field, so a basic rule in the game is to always refill it in the order field before going into chaos field for better combo possibilities.

There are three characters to choose from, each one demanding a completely different gameplay approach since their weapons are widely distinct from each other. Hal’s the most balanced one, with a nice round wing-layer that’s perfect to nullify turrets. Ifumi’s laser (which would eventually make it to Radirgy, Milestone's second shmup) is weaker, but her wing-layer rotates around her. Jinn is the most awkward to use because of the way his shots work, as in a series of explosions. Hal is a no-brainer because he’s clearly the best choice both for surviving and for scoring.

In line with the complexity of its control scheme, the true joy of Chaos Field lies in its details. Here are a few hints I came up with:

Chaos Field is tough, but offers an excellent rush once you start to understand its scoring system. One of the turning points for me was when I started coming out of the first stage with over 20 million points and both extends already activated (first with 8 and second with 20 million). In my opinion the trickiest chain to pull off is in boss 3-2, that’s why getting a decent combo in stage 3 always felt good. And even though I can chain the whole last stage, the tension provided by the last boss always kept me from reaching the 9.999 maximum combo. I did it only once while practicing, but more frustrating than not reaching the desired combo value is losing it all right before the boss dies.

The Japanese Dreamcast received a straight port from the arcade game, packed with a brief albeit cool intro. Loading times are almost negligible, and the few cut scenes are instantaneously skippable. The necessary slowdown seems to be too much at times, and I heard reports saying this version has it in excess (a comparison with the PS2 port might be done someday). It bugs me that the game keeps track of your play time and saves your control configuration, yet it doesn’t save high scores. And why no level select for practice? There should be a law forcing companies to add it in bullet hell shooters!

And did I mention the mesmerizing soundtrack? [yes, I did, I know] Techno is not my thing, but when you’re dancing with that rotating globe in stage 2 amidst all those bullet showers I can't help but feel I'm experiencing pure shmup bliss. Try it after cranking up the volume for best results! 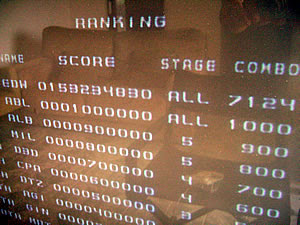