As weird as it seems given the size of the console's library, Bio-Hazard Battle is the only shmup exclusively developed by Sega for the Mega Drive. Known in Japan as Crying (?), it still draws attention as one of the most unique titles to have come out during the 16-bit era. Though one might argue on the effectiveness of the aesthetics, the game successfully manages to be different from the rest of the horizontal shooter flock while offering four different ships to choose from and solid co-op action.

What initially draws people’s attention in Bio-Hazard Battle is the sound design, which has lots of bass applied to eerie, sometimes plainly creepy compositions. It’s all in line with the setting and the style built around a biowar that almost wiped human life from the planet. Your mission is to pilot one of the four bioships in order to find a new home for future generations. The environments dominated by the enemy are diverse and inhabited by a mix of organisms that include mutated versions of insects, bacteria, reptiles and plants. A few impressive animations are applied to some of the larger creatures, and the use of color is nothing short of exquisite.

From a strictly visual standpoint one can complain about how it all comes together, but the execution is undeniably original in its self-contained world, and definitely worth a look if you're into shooters. Every stage has a different vibe and the resulting variety helps keep the game fresh and attractive even after so many years since its original launch. Today it’s also possible to play it in the Wii's Virtual Console. 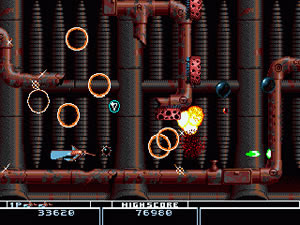 Orestes battles its way inside a maze full of unspeakable dangers

Another reason for praise besides the music and the unique graphical style is the way gameplay was dealt with. You only need to use two buttons, but the depth provided by the orb and the array of power-ups is remarkable (its echoes can be felt even in very recent releases such as Deathsmiles). Power-ups are known as seeds, appear automatically at certain points and come in four colors: green, yellow, orange and blue. With the exception of green, which is the default weapon and has no variation, the other three may vary depending on the chosen ship/character. The yellow seed can be either a twin laser beam or a stream of straight shots, the blue seed can be a continuous multidirectional burst or bubbles with minor homing ability and the orange seed either results in a bouncing ring shot or the almighty seeker laser, definitely one of the coolest and most effective homing lasers ever seen in shmup history.

Firepower can be upgraded by sticking to the same seed color. After two seeds it maxes out, with every death decreasing one power level. The orb (or "power star", according to the game's manual) moves in the opposite direction you’re pointing at and has the ability to block regular bullets, an invaluable resource in many situations where survival or point blanking becomes important. Last but not least there’s also a charge shot that fires a huge plasma wave. You can’t fire while charging, but fortunately the charging time isn’t too long. The best way to control the ship is to keep the A button pressed at all times for autofire, charging with the C button when necessary (I heard the Japanese version doesn't have any autofire). Different strategies are needed depending on the type of ship you select, since each one of them uses a specific combination for power-up variations. Orestes (top left) and Hecuba (bottom left) are faster, Electra (top right) and Polyxena (bottom right) are slower.

Some of the weapons themselves, such as the homing bubbles, are also able to block bullets. As long as you don’t touch anything that’s alive it’s totally safe to lean against any part of the environment.

From the moment your character is dropped from the mother ship to reenter the atmosphere of the planet the game unfolds in a steadily designed progression that makes you fly initially through the ruins of a city, a forest infested by weird creatures and inside a claustrophobic mine. After an underwater stage you must destroy a huge battleship piece by piece, finally reaching the planet’s polluted grounds and the enemy’s lab core. The spike in difficulty is considerable in stage 7, that one with debris coming out of huge pipes and sponge crawlers over rusted walls. This is my favorite stage despite the fact that the bulk of the challenge lies in the last level, which alternates the scrolling direction all the time and has these annoying mini-squids dropping randomly all around of the screen. Hint: trust in the power of the blue seed and the homing bubbles, and remember to use the charge shot.

Losing lives in a snap in Bio-Hazard Battle is quite easy, especially against some of the bosses that move too much such as that sneaky angler fish in the underwater stage. However, it’s just as easy to amass lots of lives by simply scoring (one extend for each 20.000 points) and by hitting a secret spot that reveals a 1UP in stages 2 to 7. It’s possible to milk bosses for more points by destroying smaller enemies. They don’t time out but you can’t milk them forever because it’s virtually impossible to avoid damaging them (they’re either too big or move too much around the screen).

The only technical drawback in the game is the slowdown that results when the screen is too crowded. Aside from that everything is well executed. The challenge slope feels just right, as well as the balance between music and sound effects.

My character of choice was Electra because it/she is the only one that uses both the orange laser and the blue homing bubbles. They’re there for the win, no doubt about it. The score below was achieved in the HARD setting and represents an improvement of 20% over my previous high score.