Lovers of the Gradius family of games will never be orphans if they stick to the old school ways of video gaming. The Otomedius titles aren’t exactly a success in this day and age, and as of now Konami simply refuses to continue with its main series, ignoring the genius approach taken with Gradius V. Long story short, Vic Viper’s legacy is practically null for hardcore players (who shun Otomedius based on design/challenge) and casual gamers alike (who might get scared of the sexually stylized anime characters). For all of you out there who fall into either category and is not afraid to tread obscure waters in order to get an extra Gradius fix, here’s yet another port of Parodius Da!, the second chapter in the spin-off series that parodies everything about Gradius.

Parodius Da! came out for the Famicom in Japan and the NES in Europe under the simplified title Parodius – not to be confused with the first game in the series, originally created for the MSX computer system and much later ported to the PSP. On the footsteps of Gradius and Salamander/Life Force, both of them released a few years prior, Parodius Da! provides shooting fun with the same basic elements of the arcade original, even though it’s a less faithful port than its predecessors in the Gradius universe. As a starter, the original game is 10 stages long, whereas here you only get 7 stages, one of which has a brand-new theme. Besides the missing levels (volcano, pinball, bubble and graveyard) there are other minor issues that take it down a bit when compared to Gradius and Salamander. 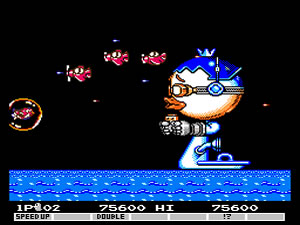 Perhaps Konami was a little lazy with 8-bit development by the time this game came out, since it’s riddled with slowdown and flicker. I can live with slowdown, but when the slowdown gets associated with poor programming decisions the gameplay suffers with boredom. Take the galactic dancer at the end of the circus stage, for instance. The thing is so slow that this single part seems to last forever. He goes about the screen four times before disappearing, testing the player’s patience as penguins arrive from the left in pairs. Seriously, why not have the dancer go back and forth once and be done with it? That part kills the flow of the game, especially if you slip there and die. I didn’t even die and it almost made me want to quit the sessions.

Fortunately there are no more similar horridly boring parts for the rest of the game. Unfortunately, slowdown remains and flicker abounds more frequently than I’d like to admit. For me one of the most important differences from other ports is that in this one I needed to activate two speed-ups in order to make things playable, and even a third one inside the ice cave level due to slowdown (the water has no holding back effect here). This means Konami managed to make all characters even slower than they already were at default conditions. Vic Viper, Takosuke the Octopus, Pentaro the Penguin and Twin Bee preserve all of their original abilities, encompassing missiles, double/tailgun, laser/spread, options and shield types. As per tried-and-true Gradius tradition, acquiring upgrades is performed by taking power-up capsules and activating the corresponding slot in the weapon array with button A (not if you choose auto power-up though, in this case the game decides for you). When starting the credit you need to choose the character, the power-up scheme (auto/manual) and the difficulty. During the course of the game you can activate a maximum of three options (in the JPN version).

Every now and then a capsule will serve as an instantaneous smart bomb (different color), but beware of the roulette item disguised as a regular capsule, which makes the weapon array go crazy and turns it into a slot machine. The last piece of the gameplay is the bell, a feature inherited from the Twin Bee franchise. Bells are sometimes released in the place of power-up capsules (not at regular intervals, sometimes they come spaced by only one capsule). Initially appearing in yellow, you can shoot them in order to get other colors with special powers. Yellow bells give cumulative score bonuses provided you don’t let any of them go by, starting in 500 and maxing out at 10.000 points. Unlike all other ports though, the value for yellow bells doesn't carry over to the next stage. Special powers from other bell colors include a smart bomb, three energy bars, growth + invincibility and a 1UP. Due to the lack of buttons in the controller, active bell powers (smart bomb and energy bars) are triggered with the firing input (button B). Since this version lacks score-based extends, the 1UP scheme is unique among all ports of Parodius Da!.


I always wondered what went on inside this battleship...
(courtesy of YouTube user wittlericardo)

The lack of extends is probably the main source of difficulty in the game besides the ice cave level, the only stage where the game decides to really get angry at you – and where slowdown practically reaches its peak. All other levels (beach, circus, CARNIVAL, candy pyramid, battleship and fortress) are considerably easier, but you can still be surprised by something. This is a Parodius game after all, isn’t it? I capitalized “carnival” because this particular stage was developed exclusively for this port, complete with roller-coasters you can ride once you destroy its occupants (just beware when leaving it because it’s very easy to crash against the rail and die). Those who enjoy secrets will also like to know that a secret passage exists in the battleship level: destroy the ship’s mouth and go into it to see what’s inside the vessel.

Given all its little issues, I must admit only hardcore Parodius fans might be enthusiastic about this version of Parodius Da!. It’s a fun game, but it can also be boring and unfair. I can’t be sure if there’s actually any increase in difficulty once you loop the game, if such increase exists it’s pretty minimal. On the second loop the only real difference I noticed is the midboss of the carnival level being circled by a different type of enemy. As I started the third loop I refrained from shooting to see what would happen, but no bullet or enemy hit me during the pre-stage. I guess one could play the game forever and die from screw-ups only, but at least this isn’t as challenge-inept as Gradius II and its ridiculous extend routine.

My character of choice this time was Twin Bee, since it was the only one I hadn’t used across all ports of Parodius Da! I played so far. In my opinion it’s the hardest character to play with because his bombs are replaced by forward punches and his options have no trailing ability, getting sunk into the character if you stop moving (same as Pentaro). I had reached stage 3-3 when I accidentally picked up a ride in the roller-coaster and died my last life (Normal). 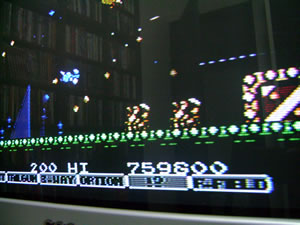