For a game that causes a little confusion with a couple of different acronyms (such as EDF or Super EDF, which comes from the in-game title), Earth Defense Force is actually a pretty straightforward outer space shooting romp. Please do not mistake it as being similar to the dreadful Earth Defense for the Mega Drive, nor include it in the Earth Defense Force action series released for more modern consoles. The SNES game is a port from an arcade game commonly referred to as EDF - Earth Defense Force, and a decent one at that... if you don’t get too technical on graphics and such and you're not too picky about the suppression of a few sections.

I had a very strange experience when booting the game for serious play this time. There was almost no music and the BGM on the first level was incredibly minimal. Only when I entered the boss fight and the audio went fully silent I figured something was definitely wrong. When I returned to it later on things were back to normal, and I noticed that upon powering up the console whenever the Jaleco logo was absent I would get the same sound problems. And if this happened I had to keep trying (power on/off) until I was able to get the damn thing back to normal... Is my SNES dying by any chance? Or is this particular to EDF? Note: with audio problems the difficulty in the options menu gets stuck on EASY, even though it’s not supposed to be there (regular difficulties are only NORMAL and HARD). I didn't really play the game again on this bastard easy setting, I had to seize the little time I had to play.

Well, so much about bugs, but what about the game itself? Storywise it’s you against an alien threat. Again. This time they have apparently devised a secret super weapon on the Moon, so there you go with your lone spaceship on a mission to save the Solar System.

Prior to each stage in Earth Defense Force the player has to configure the ship’s weapon, choosing one of eight choices graded according to three criteria (speed, power, firing rate). These weapons are vulcan, laser, atomic, homing, explode, search/seeking laser, photon and grenade. Ship controls allow you to fly at three different speeds and to use the selected weapon in conjunction with two auxiliary satellites that can initially be set to the ship’s nose (concentrated fire) or in rotating formation (distributed fire). Satellites are invincible, block enemy bullets and are also able to damage by contact. Control inputs can be set in the options menu according to six different configurations, and my preferred choice was config #3 (Y for shot, L for option formation and R for speed change).

Some of the most interesting aspects in the game are the complete absence of power-up items and an almost total absence of fixed obstacles. The only few walls you’ll need to worry about appear in the last stage. As for the lack of power-ups, Earth Defense Force uses an experience upgrade system instead, which is tracked by the overhead bar. Killing enemies will automatically fill this bar and increase firepower from level 1 up to level 5. Each level upgrade applies sprite changes to the currently used weapon and increments its firepower. Extra satellite formations are activated once you achieve higher levels: level 3 adds a trailing formation (satellites follow your movement around the screen) and level 5 adds the homing formation (both satellites stand behind the ship, automatically homing on the nearest enemy).  When you get hit you lose one shield and the process of leveling up is delayed a little bit.

Shield, you say? Yes, that’s actually how the game calls your lives. Initially each level starts out with three of them. Every time you get hit the ship smokes for a few seconds, going down in permanent smoke and failure if you get hit on the last shield point (GAME OVER). Acquiring more lives is possible, but only after you reach a power level of 5. When this happens every subsequent filling of the upgrade bar results in an extra shield, a very important accomplishment during later stages.

Earth Defense Force is better than the actual generic package makes it out to be. Stages are a bit long but the fast scrolling and resulting sense of speed in most of them keeps the action going at a reasonable rate. Slowdown ensues here and there but it’s not gamebreaking in any way. The challenge varies wildly depending on which weapon you choose, but if you want to cruise through the first half of the game just go with homing and you’ll be okay. Once the ship is sufficiently leveled up it’s safer to try other weapon types. In any case, the last stage definitely requires another weapon other than homing, or else you’ll spend a long time in the process of killing one of the mid-bosses (his electrical sphere is a magnet for homing shots, thus making the weapon almost useless). 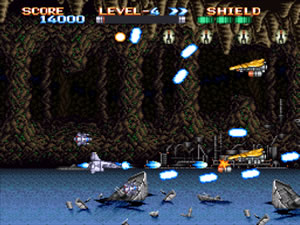 Regarding music, I have to say I enjoyed the soundtrack of Earth Defense Force mostly for its heavy use of bass (it’s great). My favorite stage is the third one inside the caves. Good BGM, cool graphics that somehow remind me of Thunder Force III and a purely Darius-inspired boss to close the treat. Ugly mode 7 effects kick in during the outer space approach of stage 4, and that’s exactly where the game starts to get a little bit more demanding. And just when repetition threatens to kill the pace the game throws a shorter last stage to speed things up. Soon enough you find yourself in the final showdown against the aliens, who try to stop you in a series of consecutive boss fights.

Even though there’s a lot to be squeezed from the game as far as weapon choices and scoring goes, there’s no doubt that half the weapons are considerably hard to use. Sure, the satellite formations are there to fill in the gaps of a less powerful gun, but playing the game with a slow-firing weapon requires thorough memorization of enemy patterns. Especially interesting is the photon weapon, which creates a bullet-absorbing shield when used with the concentrated satellite formation.The scoring side of the game is based on a stage bonus that’s proportional to the number of enemies you destroy, but there’s also a secret bonus of 100.000 points to be had if you manage to beat the level without getting hit.

During my 1CC run I used homing for the whole game except in the last stage, where I switched to photon. And here's the final score: 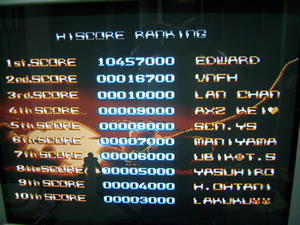