Included in the first wave of games that marked the release of the Mega Drive in the Western world, Thunder Force II arrived to ignite the spark that would eventually make way to one of the most successful shmup franchises of all time. Despite being technically inferior to its first incarnation for the Sharp X68000 computer, it was actually because of this game that the Thunder Force name gained more popularity among video game fans. Besides, it offers a solid shmup experience and is regarded by many people as the console's best launch title, serving as a suitable bridge between the primitive style of the first game in the series (only available for extremely obscure computer platforms) and the awesome experience provided by the now classic Thunder Force III.

Unique among all hybrid shmups out there, Thunder Force II mixes horizontal scrolling with a multidirectional style of shooting that's reminiscent from the first chapter's gameplay. Similar in style to Bosconian or Technosoft's own real time strategy game Herzog Zwei, it soon became clear that the overhead levels in Thunder Force II weren't as popular as the brand-new, more exciting horizontal stages. Reasons to this are the overlapping of the scenery with no navigation maps at all (which lends itself to frustration in later levels), the chaotic nature of the AI (easier to die from sudden/stray bullets) and the forced displacement of the ship (it's always moving). Some people like these levels, but I'll be honest and say I'm glad Technosoft got rid of them in the next game. That's not to say I hate them, after all they're part of what makes Thunder Force II special, either within its own series or as a stand-alone decent shooter.

According to the instruction manual a “stage” in the game is divided in two sections: first you need to destroy four ground bases in the overhead area, then you infiltrate the enemy's defense line in the horizontal level to fight the boss. If this is true then Thunder Force II has 5 stages, the last one being a single overhead confrontation against the huge Preareos spaceship. However, I prefer to face the game as an adventure with 5 overhead and 4 horizontal sections. Even though some aspects are shared between both styles of gameplay, each one has its own set of rules. For instance, they both share input controls (shoot with button B, choose weapon with A or C), fixed speed for the ship and some of the weapons. In the overhead levels the ship must take on both aerial and ground targets, therefore almost all weapons in these sections are capable of firing ground shots, much like in Xevious. This does not apply to the horizontal parts. 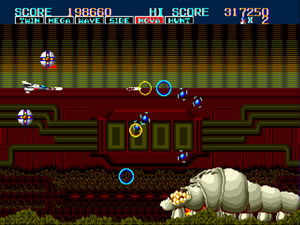 The maggot boss in stage 6

Thunder Force's classic weapon system is based on collecting icons and selecting the desired weapon at any time. In Thunder Force II every new life comes with only two default weapons: twin (forward dual shot) and back (forward/backward single shot). Further weapons in the overhead sections include five-way (F), destroy (D), clash (C) and hunter (H). Once taken, laser (L) and wide (W) replace twin and back respectively. Attention: hunter is the only weapon that lacks the ability to fire ground shots. For the horizontal sections twin and back are still the default, laser (L) returns slightly different and hunter (H) remains unaltered. New additions are side blaster (S), wave (W), nova (N) and the upgrade to back called mega flash (M). Common to all areas are the following upgrades: claw (C, adds a rotating orb that absorbs bullets and provides additional firepower), roll (R, makes the claw rotate even faster for a while), breaker (B, temporary invincibility shield) and 1UP (extra life). It’s important to note that both the arena and the horizontal stages keep track of weapons separately. At the start of a horizontal level you’ll be as powered up as you were in the previous horizontal level, and the same happens to the overhead stages.

With so many weapons to choose from, it might seem the arsenal at the player's disposal is a bit overwhelming. That's only partially true since the more you play the more you veer into using two or three favorite weapons (mine for the horizontal levels are wave shot, side blaster and hunter). I don't care much about weapons in the arena levels because my objective there is always to take out the bases as fast as possible to maximize scoring, even at the cost of a few lives. That's actually the first part of the scoring techniques in Thunder Force II: finish an overhead stage in less than one minute and win a bonus of 250.000 points, take longer and get lower bonuses (not valid for the last stage). The second scoring technique involves aiming for the highest kill ratio in the horizontal levels. No bonuses are given for remaining life stock, so take advantage of the rather benevolent extend scheme to amass lots of lives and make the way to the 1CC a little easier. The first extend comes with 34.000 points, and further ones are granted at approximately every 100.000 points.

Many of the features that would become synonym with the series are already at display in Thunder Force II, such as the exquisite graphic design, the great music and an overall sense of style that's pleasing to the eye and to the ears. Slowdown is totally absent and hit detection is flawless. Some of the reasons why the horizontal stages were much more successful appear as soon as the second stage starts: better level design, better weapon implementation, obstacles that demand fast maneuvering and encourages strategic positioning, the sheer feeling that you have more control over everything. Later on you come across high speed sections, moving gates, laser walls and even changes in scrolling direction. Since dying strips you of all weapons and leaves you only with twin and back, memorization plays a big part towards success. Dying can be really harsh in itself, but coming out of any of those horizontal stages in one piece definitely feels gratifying (and showcases how much of a rush a real shooter can provide).

As for the overhead arena levels, they have their own set of challenges to be won. On the first stage, for instance, you need to hit the gate switches to go from one chamber to the other. Further levels become increasingly claustrophobic, twitchy and confusing, with narrow walls and organic matter that must be pierced through with a forward weapon, enemies tending to swarm around in the most unpredictable patterns. Besides polarizing opinions thanks to these particular sections, Thunder Force II is also famous for its scratchy digitized voices, the initial message in particular. Everybody has his/her own version of it, but the official one should read “This is Exceliza, roger, good luck!”. The name Exceliza is related to the game's background story, which is rather complicated and not really important in the grand scheme of things. Go read the manual if you want to know more about it.

When compared to the defining horizontal shooting series of the 80s, namely Gradius and R-Type, the reason behind the initial and later success of Thunder Force probably lies in the fact that the horizontal stages in Thunder Force II felt considerably fresh by offering an arcade-like experience at home, coupled with fast action and no checkpoints at all in an era where it was still considered commonplace to implement methodical gameplay with checkpoints. This is one of the reasons why I disagree with people who consider Thunder Force II a difficult shooter. It’s got its quirks like any other game, but the lack of checkpoints and the generous extend scheme certainly helps those who want to see it to the end.

Saturn owners can play this game by means of the Thunder Force Gold Pack 1 disc, which unites Thunder Force II and Thunder Force III in the same shiny package. I managed to max out all bonuses from the arena stages when trying to top my previous high score in Thunder Force II for the Mega Drive, achieving a final improvement of 24% on the Normal difficulty (in order to have access to the options, hold A and press START when the start screen appears; the main difference when playing on Hard is that enemies shoot twice more bullets). 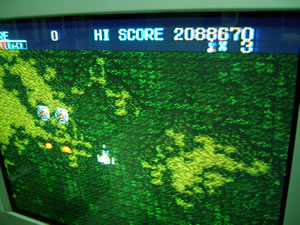