Vertical shooters where you dodge bullets along a fixed horizontal line represent a very special category in the shooting genre. Most of them fail to offer any valuable excitement for whatever reasons, be it for their simplicity or the lack of a final goal, i.e. proper ending. Within the series initiated by Galaxian in 1979 on the trail of Space Invaders, the first game to offer both a batch of innovations and a clear ending is Galaga '88. Coming after Galaga and Gaplus, it's still regarded by many people as the highlight of the franchise and a classic in its own right. A few console ports of the game were released ever since, including a much lauded PC Engine/Turbografx-16 version and emulation jobs included in more recent Namco compilations.

Playstation 2 owners can enjoy Galaga '88 by means of the US release of Namco Museum 50th Anniversary. The only minor catch here is that when the disc is played for the first time you need to score at least 40.000 points in Galaga to unlock the game (don't forget to manually save your performance before turning off the console!). If you're playing the Japanese version of the compilation, titled Namco Museum Arcade Hits!, Galaga '88 comes unlocked right off the bat. I'm quite fond of the interface Namco came up with on these discs, the arcade cabinet arrangement and the songs from the 80s are a nice touch. Unfortunately there's no TATE option for any of the vertical games in the collection, so bigger TVs are definitely welcome (the other verticals are Galaxian, Galaga, Xevious and Dragon Spirit).

One of the nicest things about Galaga '88 is the scoring system. With 29 stages, the game has an organic structure and evolves according to the player's boldness. Play well, be aggressive and reach a higher dimension while scoring better along the way. Be shy, avoid danger and tread an easier game with lesser scores. That being said, I must confess I chickened out and chose the second path. 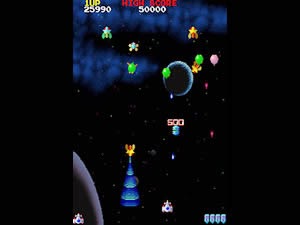 Boss Galagan in capture activity and a free-falling blue canister

Sticking to an easier game is pretty much a matter of choice. Advancing to higher dimensions isn't complicated, all you need to do is collect two of those blue canisters left behind by an obstacle or by one of those giant bugs formed from the fusion of two smaller enemies. By doing so a dimensional rift will open after the bonus level, granting a score bonus and sending the ship against different batches of enemies. Sure, the game gets increasingly harder no matter what, but sticking to lower dimensions keeps the odds more favorable to survival. But alas! I'm getting ahead of myself here!

Galaga '88 begins by allowing the player to choose a single or a double ship to start the credit (for the latter you get one spare ship only). Waves of outer space insect flocks dart into the screen in rotating patterns. They might shoot or dive into you while entering the play field, and once all of them have settled in formation they’ll start their specific attacks. Enemies come in varying sizes and in a multitude of colors, static backgrounds change for every level as you advance and there are even a couple of sections with scrolling backgrounds. The memorable sound design mixes a healthy gallery of bleeps and clanks with brief music snippets and longer BGMs, lending a nice, unique flavor to the twitchy gameplay.

Every once in a while, more specifically in stages 3, 7, 14, 18, 22 and 26, the message THAT’S GALACTIC DANCIN’ tells the player he/she is entering a bonus area, much like the challenging stage of the original Galaga. If you manage to destroy all 40 bugs in it you get 10.000 points (letting all of them live gives you a secret bonus of 10.000 points). The galactic dancing thing isn’t just a fancy name, the enemies really seem to be dancing – note how they always enter the screen at specific points of the music. Those who know where and when the bugs are coming from have better chances at grabbing the extra points in a bonus area.

As I mentioned above, after the bonus level the game checks how many blue canisters you have collected. Two canisters send you to the next dimension, one or none do nothing. Each dimension comes with different enemies in different formation patterns. For instance, if you keep advancing you’ll be facing inflatable bubble enemies and shielded bugs with progressively more aggressive behavior. The fifth dimension is the farthest you can reach, afterwards blue canisters serve only as source for a few more points. Such a branching system is quite unique and allows for a flexible management of the challenge level, since you just need to avoid the canisters to play an easier game. The only moment where you’re forced to advance dimensions is in stage 10, since you’re automatically sent forward if you haven’t reached dimension 2 yet. Because of this Galaga '88 comes with four different endings, one for each finishing dimension (2, 3, 4 or 5).

There’s no doubt that this game is fun, and it’s probably one of the most accomplished old school fixed shooters. I do have some gripes with it though, such as the firing rate. In Galaga '88 (or any Galaga game for that matter) it’s not enough to shoot, you need to aim. Dying because you missed that pesky bug in its descending arch becomes more and more infuriating. Dying because an enemy dives on you and you have no firepower to fight back often comes with a “bullshit” exclamation, on my part at least. Of course memorization and dodging are still in order, but in a fixed shooter like Galaga '88 these skills are in a whole different league than the majority of the other games in the genre. And I suck at it... Having a turbo controller doesn't help much because bullets come out in bursts instead of a continuous firing stream. That’s why in order to keep the stakes at a favorable level 100% of the players prefer to start the game with the double ship, allowing a boss Galagan to capture it as soon as possible (they're the green bugs in the uppermost formation line that generally appear in the third or fourth incoming wave and take two hits to kill). One of these bugs always approaches and emits a tractor beam, so let yourself be taken when this happens. Wait until it leaves its resting place and kill it while in flight, without hitting the ship behind it. When done right, the released double ship will descend and merge with the spare ship to create a triple ship, with a larger hitbox but much more effective firepower.

Whenever the triple ship is hit you revert back to the double ship, get hit again and you’re left with a single ship. To regain another ship and make it double or triple just wait for the next tractor bug and do it all over again. That’s easier said than done, of course, especially in later levels. Speaking of which, later on the last enemy in a stage might leave a shiny pink canister behind: take it and get promoted to a triple ship at once, regardless of your current status. I’d say keeping the triple ship throughout the game is essential to survive in the long run, as well as to score better. By advancing dimensions scoring possibilities increase in line with the difficulty but there are also other ways to get more points, such as performing well in the galactic dancing or killing the lemon-like insects only when the bug formation has been fully assembled (destroy their falling debris, different colors award different points). All secondary forms of bugs that merge or split are also worth more, as well as all destructible obstacles.

By default the player wins extends at 50, 140, 300 and 480 thousand points. Once the credit is over a map shows your progress across the dimensions, as well as stats on shots fired, number of hits and destruction ratio. The port of Galaga '88 on the Namco Museum 50th Anniversary starts at difficulty 1, but the setting should be changed to 3 in order to match the arcade difficulty. There’s no auto-save feature on the disc, so if you want to keep your high scores remember to always get out of the game and save before turning off the console. The 1CC result below was achieved on difficulty 3. I got the ending for the 2nd dimension, with the aid of a turbo controller for proper autofire. 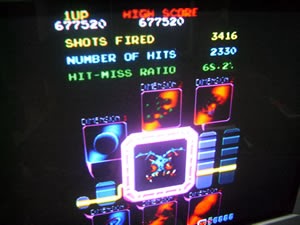