By 2003 the Dreamcast was officially dead, yet it was graced by Alfa System with a port of Shikigami No Shiro II, joining a private little club also composed by the Gamecube, the Xbox, the Playstation 2 and Windows PC. The Dreamcast didn't receive any version of the first game, so this must have happened because the second one was originally built on Sega Naomi hardware. I admit the whole idea behind this particular shooting franchise isn’t that enticing to me. However, just like in the experience I had with the first chapter I was hooked and deeply involved by the time I was almost clearing Shikigami No Shiro II. You can’t really judge a game by its cover, and the whole process of learning and fluidly playing a game like this is nothing short of fascinating in several levels, from the choice of the character to all those stages and bosses that seem to be impossible at first sight.

Of course glory mode in Shikigami No Shiro II is much more than just achieving the desired 1CC. For those not familiar with them, these games belong to the bullet hell subgenre that involves “grazing”. In a nutshell, scoring higher is directly proportional to how close you get to the danger (bullets, enemies or scenery). Play safe and score peanuts, play risky and inflate your score. It’s that simple. And the basis of the so-called TBS (Tension Bonus System) is this: the closer you are to the danger the higher the multiplier applied to destroyed enemies (from ×2 to ×8). This is directly inherited from the gameplay of the first chapter, and while Shikigami No Shiro II tweaks other features in the game the general atmosphere remains the same. People are flying and battling other people, as well as all sorts of magical creatures.

According to Wikipedia, in the beginning of the game a giant castle appears from above the city of Tokyo, prompting mankind to initiate a battle against the gods (the Dreamcast port came out only in Japan and all in-game text is in Japanese). Normally the start of a level and every boss encounter are preceded by spoken phrases and dialogue interactions showcasing the chosen character’s (or characters’, in 2-player mode) story. I assume it might be fairly engaging for those who care about this, but I always set dialogue to OFF as soon as I press start to play. 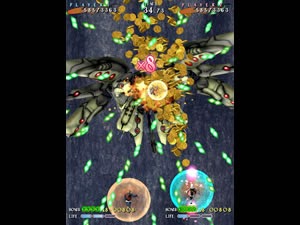 Two against the mid-boss of stage 2

Shikigami No Shiro games are remarkable for having one of the most varied character rosters in the history of shmups. Even though they share the same inputs, the behavior of their powers changes drastically from one character to the next. Basic inputs consist of shot (A), rapid shot (R) and bomb (B). Shot overrides rapid shot, and holding it slows down the character while activating the shikigami attack. Very important: both shot and shikigami get a generous boost in power whenever your TBS multiplier is at ×7 or ×8. Two variations of the shikigami attack exist for each character, which must be chosen during the character selection screen and are commonly referred to as type 1 and type 2. The game keeps track of your performance in each of the two sections in a level, so you always know how well you’re doing as the credit unfolds.

Besides the TBS multiplier values, scoring is also intimately related to coins. Enemies release free-falling coins when destroyed with shot, but if they’re killed with the shikigami attack all generated coins are automatically sucked into the character. Provided you don't get hit, coin value increases from 10 to 10.000 points in each stage (good news: missing a coin has no negative impact in coin value). Keeping higher multipliers results in more coins, more points and better bonuses when you finish the section of a level. Most important to scoring is the fact that having a ×8 multiplier during the moment the coins are taken adds them to a special counter called "×8 action", which is probably the biggest contributor to the overall score in the game. This is easier said than done, especially on bosses and their bullet cancelling nature when one of their forms is destroyed.

As a departure from the first Shikigami No Shiro, here there are no power upgrades at all. You’re fully powered from the get go and there’s no power down punishment when you get hit. Getting hit has two consequences besides losing a life: (1) you reset the coin value and (2) gain an extra bomb. Unrelated to coins and scoring, the relation between life and bomb stock is quite distinct from the regular shooter. Bombs are independent of life count and have a maximum number of five (no such thing as 3 bombs per life). At any moment you can have up to three lives and five bombs only, any extend or extra bomb gained when you're maxed out is lost. Besides being granted with a bomb when getting hit you also get an extra bomb when you reach an extend mark, which comes with 400.000 first and for every 700.000 points afterwards.

In Shikigami No Shiro II time isn’t such a constraint anymore since only boss battles are timed. Remaining time after a boss is defeated is converted in score, but of course milking applies in certain cases. Milking, however, has to be carefully planned out because of the devil cycle: if time runs out the screen is quickly flooded with invincible little demons that swarm around you. The fourth boss (Yukari Horiguchi) can be particularly annoying with this, because if you fail to kill her last form before she fires the three groups of lasers she’ll recover half her health and the fight will be pretty much lost.

One of the things I love most about this game is how the Practice Mode helps to give a sense of improvement as you play over and over. Each section is unlocked only if you reach it on a single credit. Sure, the game eventually overrides the limited continues with free play, but if you care about playing a shooter properly you'll know what I mean. When the bullet clouds get denser and seem to be overwhelming, look out for the glow inside the character identifying his/her hitbox. Careful positioning and a good herding strategy often help finding optimal paths amidst the chaos, then it's all about focus. On a side note, the absolute lack of ground enemies makes it impossible to pay attention to what's going on in the backgrounds while you're playing, and I just wish things were different in that regard. The focus is always on the trajectory of bullets, whenever I try to figure out what's going on down below I get fried easily. Graphics are there merely as a visual complement.

At certain moments I felt this sequel wasn't as tough as the first game, but then I remembered I had played Shikigami No Shiro with the "wait" option set to OFF (it eliminates slowdown). There's no such option in the Dreamcast port for Shiki II so I can't really compare both of them now. Shikigami No Shiro II is also a lot less schizophrenic with its enemy gallery, which isn't nearly as surreal as the gallery from the first chapter.

By default the game offers the player two distinct modes for regular play: Normal and Easy. Easy is just a watered down version of the main game with only three stages. The Dreamcast port adds an Extreme Game mode where, on top of being a harder version, every defeated enemy will release a certain amount of suicide bullets. In all of these modes it's possible to select between the original and an alternate soundtrack, this last one being just a slightly rearranged take on the soundtrack of Shikigami No Shiro. Other options included are Story Recollect (where you can watch the dialogue sequences again, but only if they were seen at least once during gameplay) and Gallery Mode (with tons of artwork unlocked by playing with multiple characters). Interesting additional tweaks can be applied for fun with the extra options (unlocked with free play inside the regular options menu), which allow changes to game/bullet speed, bullet size, TBS range and patterns in the Extreme mode. Of course TATE orientation is there as well.

Included in the Limited Edition of the Dreamcast port is a soundtrack CD, a set of trading cards and a Japanese telephone card. My copy is the regular one but I did get the OST separately later, even though I don't think it's a standout in any way. The tracks do get better as you get closer to the end of the game though. I played it on TATE (Normal) and decided early on to go with protagonist Kohtaru Kuga, type 1, final result is below. He's got a straight shot and his shikigami seems to be an elderly ghost that homes on enemies. When I play the game again on the Playstation 2 I'll choose a different character! 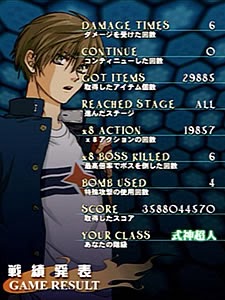