Thinking back in retrospect, NES shmuppers were very lucky not only due to the sheer amount of titles available (which trumped the Master System by miles), but also because they were able to have a taste of some of the finest arcade games of that era. At the time, in my little corner of the world I never imagined the system had a port of Twin Cobra, for example. That in itself is amazing. Unofficial sequel to Tiger-Heli and a true representative of Toaplan’s second wave of arcade games, we all know it also appeared in more powerful platforms. However, being able to play Twin Cobra in an 8-bit system is a guilty pleasure of sorts.

In Famicom language the name of the game is Kyūkyoku Tiger, a disparity that also mirrors the existing confusion with the arcade titles. Since my game is the 72-pin US variation published by Sammy, as soon as I finished it I went to the emulator to check if the main difference from both arcade versions was also applicable to the Nintendo platform. I confirmed they have no checkpoints, so yeah... The lack of checkpoints qualifies both NES and Famicom cartridges as true Twin Cobra. Surprisingly decent for NES standards, the port manages to capture the essence of the original down to its relentless difficulty, hardware constraints considered. It probably does it better than previous Toaplan NES ports Tiger-Heli and Sky/Flying Shark, even though it’s been more severely toned down than both of them in graphical and musical terms. 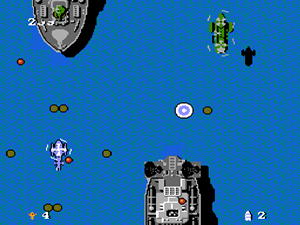 Twin Cobra is about an attack helicopter that flies from one ship base to another while destroying everything in its path, ground and aerial. Just assume you’re actually flying over an enemy country that’s been evacuated, so you don’t need to feel bad for any civilian casualties... In order to fulfill your mission an assortment of upgrade items is definitely needed, especially the ones that are released by the green helicarrier that fires a spread of three bullets: S stands for "supercharger" and increases the power of the current weapon, B adds another bomb to the stock and the colored saucer/circle is used to switch the weapon type. Its colors cycle from red (straight default vulcan shot) to green (laser), blue (spread shot), yellow (4-way shot with slight homing ability) and then back to red and so on and so forth. Note that taking the colored icon merely changes the weapon type, with no power-up function at all. Due to the washed out colors of this port yellow can also be mistaken as a shade of muddy green or even brown - as stated in the instruction manual.

Selected ground targets also reveal several items, the majority of them consisting of a star-shaped yellow P. These contribute greatly to the overall score if you can beat the level without dying, since each P collected within the stage or since your last death is worth 3.000 points whenever you land. Other items to be taken from ground targets are the white P (brief invincibility), extra bombs and extra lives (1UP) that appear only when you survive long enough. Speaking of extra lives, you can also gain them by scoring: the first extend comes with 50.000 points, and then you get another one at every 150.000 points.

As with many other Toaplan titles, a very distinct aspect about Twin Cobra is its enemy gallery, which in this case is formed exclusively by helicopters, turrets, ships and tanks. The NES adaptation retained many of their characteristics, such as the flying patterns of enemy choppers (which change in each level) and turret formations. On the other hand, tanks do not appear from inside bunkers anymore and are restricted to open areas only, and I’m sure most people will be pleased to know that there are no more enemies approaching from the bottom of the screen. The homing ability of the yellow weapon is new to this port, actually making it an useful resource this time around (an improvement, yay!). Later boss fights were made easier because the NES just can’t handle two bosses/tanks at once. Some of the consequences are the player facing one tank boss at a time and the 8th and 3rd bosses being the same. Another clear concession is the square bullet pattern of the 9th boss, which was simplified to something less dangerous.

Despite all the simplifications made during the transition to the 8-bit platform you still need to be extra careful with treacherous sniper tanks appearing from the sides. From all enemies, at least one of them is more dangerous than its original counterpart: the firing rate of that green tank with two hatches on the sides is nasty! Be warned that in the last couple of levels enemy bullet speed increases considerably and does not subside, therefore stocking lives and bombs is the best strategy to deal with the final mayhem. Just like in the original, bombs must be used proactively because they have a delay and lack any panic effect (note: the maximum number of lives/bombs you can carry is 9, anything acquired beyond that is lost).

Of course there are better ways to experience the game at home, but if the NES is all you've got then there's no need to be afraid of this port. Overall the gameplay isn't affected negatively by the reduced frame rate (there are far better examples on the console), so fortunately Twin Cobra moves and scrolls just fast enough to keep things visible and under control. It's reasonably fun, and you even get to experience a few decent dodging battles against bosses. Flicker isn’t an issue but a little bit of slowdown is to be expected.

A curious aspect of the game is that half the helicopter disappears on the bottom of the screen if you move against the lower border. And it's not a graphical hiccup "per se", but in my TV set the ripple effect in the water behaves awkwardly, disappearing completely whenever you’re moving to the right. I don't know if the developer thought people wouldn't care about finishing the game in a single credit, but when this happens you get stuck in the ending (the game doesn't loop). Unfortunately the act of resetting also resets the high score display in the opening screen, so players need to pause as soon as the last boss is beaten to take note of the score. Here's my final result: 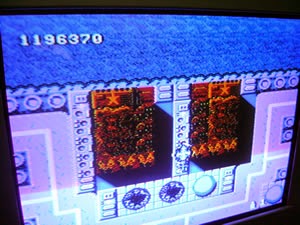