The wonders of unlicensed games are for the brave only. Brave players, brave collectors! Whatever the case, playing with an actual retail copy of a game like this almost feels like pure waste for a variety of reasons. Firstly, why spend effort and lots of money trying to track down an unlicensed shooter that’s almost impossible to find? And then, why spend time with such low-level gaming when I could be getting raped again and again by stuff like Gradius III? I don’t need to answer either question. The answers are obvious, and those who value both collecting and gaming in equal measure will know what I mean.

Gamtec was historically more active in the 16-bit scene, but the company at least managed to deliver this single shmup for the Famicom. I have already come across lots of confusion regarding its actual name, with many sources pointing that it was somehow related to Raiden. Of course Thunderbolt II – or Thunderbolt Fighting Plane, as shown in the game’s start screen – has nothing to do with Seibu Kaihatsu’s classic. It doesn’t even bear any resemblance with Thunderbolt II for the Mega Drive, which supposedly came out a couple of years later and uses the same artwork for box and cartridge. I say “supposedly” because the back of the Famicom box shows screenshots from the Mega Drive version. 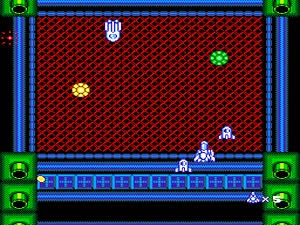 Don't try to find where bullets are coming from

Shady connections with the Mega Drive counterpart aside, the gameplay in the 8-bit version is actually very similar to another Gamtec shooter: pacing and frame rate, particularly, seem to have been based on the same mold that gave birth to Magic Girl. Poor frame rate combined with poor hit detection is the biggest culprit of Thunderbolt II’s lackluster nature, and pretty much crushes any good impression that might come from the game's few but cool graphical effects, namely the smart bomb explosions and the wavy graphics preceding some boss fights. Well, in an extremely far-fetched comparison you could also say that the first boss might be mistaken as something straight out of Recca.

Anyway, the game comes with a quick intro showing an alien attack on Earth. The cannon-looking spaceship darts into outer space armed with a single weapon fired by button A (autofire enabled by default). By shooting a characteristic carrier colored power-up items are released and descend slowly across the screen. Take them in order to switch/upgrade your weapon: blue (default shot that evolves into a 5-way Star Soldier style pattern), brown (cross-shaped 4-way shot when maxed out), green (3-way forward laser at max power) and yellow (6-way shot at max power). Take the same color in order to power up the weapon, and once it's maxed out watch as all same-colored items create a big explosion that works as a screen-clearing bomb. Finally, a flashing power-up works as a smart bomb regardless of the weapon used or its current level.

Getting hit powers down the weapon in one level, and if the ship is hit in its lowest condition the player dies. Since it takes three items to max out firepower and start taking advantage of the smart bombs, three hits is also the amount of damage you can withstand from a maxed out condition before dying. This leads to an interesting survival mechanic, where taking two equal items of a different color guarantees a little extra health if you feel threatened at the lowest power level. Auxiliary weapons appear in the form of homing shots (M) or rotating options (R), both with two levels of power. Homing is good to destroy stray enemies but lacks the protection provided by options against regular bullets, and both are also downgraded when you get hit.


A full-blown bolt of thunder
(courtesy of YouTube user MrTrizeal)

In total, Thunderbolt II boasts an overwhelmingly disappointing amount of three stages. The themes are outer space, forest/city/ocean and desert, with enemies spawning from all sides in formations ranging from naive to schizophrenic. Of all the wrongs in the game, some of the most annoying are bullets coming out of nowhere (!) and bosses spitting nearly unavoidable attacks aggravated by the awful frame rate. Sometimes power-ups get stuck on the top of the screen or change colors without notice. Even the abysmal music slows down when things get too hectic or too heavy for the Famicom to handle, as in the fight against the first boss.

Don’t try to look for any score display during the game itself, it only shows up for a few seconds after you beat the boss. I can’t even tell how the extend routine works! Suffice it to say you earn lots of lives, which is good for when you need to face the cheap attacks of the third and last boss. Fortunately you’re allowed to pause and take note of your final score once he dies and the three-panel ending starts cycling forever (see below). 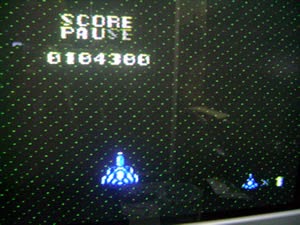 Note for collectors: I doubt the original box was supposed to house anything more than the cartridge, so I assume the game never had any manual. Despite its Taiwanese origin, the text on back of the box is all written in Japanese.
Posted by Edward at 12:56 AM