For most people Micronet is just a footnote in gaming history, and publishing Raiden Trad is probably their most recognizable contribution to the Mega Drive shmup library. Despite being both developed and released by Micronet, Curse never received the same attention for obvious reasons. The first one of them is that the game never left Japan, while other reasons can easily relate to the frame rate, the short duration or the fact that the game has a broken scoring system. This wasn't the first time I played Curse, but only now I noticed you can milk the last boss infinitely for a theoretical counterstop.

By taking a look at the cover art it's not possible to know what's inside as a game. Suffice it to say that the stylish cybernetic head is the last boss, and between the start and the end of the journey you get through a mix of organic, outer space and high-tech environments. Reasoning for the name Curse probably exists somehow in the instruction manual since there's no indication whatsoever in the game itself, a feeble shooting romp marked by a strangely odd frame rate. As low as it seems, this frame rate is no impediment for the gameplay to throw a series of high speed sections that demand some level of anticipation from the player. Multiple parallax layers abound in most stages, and the aggressive choice of colors just lends a peculiar feel to the experience, one that resembles Bio-Ship Paladin at times.

Anyway, if you're able to accept the frame rate as it is then there's some sort of enjoyment to be had here. The level of cheapness doesn't veer into the realm of "blazing fast bullets you can't dodge", which is one of the flaws of games designed with bad frame rates. You'll still die a few times from things popping out of nowhere, mind you. 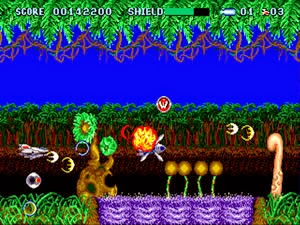 Deadly spores of the first level

A basic pea shot is all you have on your ship as the credit starts. Shooting is accomplished with button B, whereas button A deploys a bomb and button C is used to set the position of the orb (see below). Despite the lack of side reach the pea shot is actually pretty decent in its effectiveness, but you can also activate three other weapons by taking their respective icons: V (vulcan), W (wave) and C (cluster bombs). Once active, each weapon can be upgraded twice by successively taking the same item, and to switch them just take a different one. Vulcan is excellent for its spread capabilities, wave is the only one that can pierce though walls and cluster bombs provide a little destructive spectacle as debris and shards fly everywhere when the projectiles hit something. A better set of sound effects would've done wonders to the way weapons work, but unfortunately that's not the case. They just sound too soft.

Each life has a shield that can withstand a few hits and is fully recovered when you take the E icon. Other items to be collected are S (speed-up), M (homing missiles) and an orb that surrounds the ship and rests in a fixed position defined with button C. Once you get two orbs they're positioned against each other and can only be placed in two different ways, either horizontally or vertically. Orbs provide protection against regular bullets and extra firepower, which can be upgraded by acquiring further orbs (fully powered orbs will fire three-way shots in both directions). The same upgrade scheme applies to the homing missiles, and at the maximum level the ship fires three of them at once. They might be slow but they're still useful since most enemies are 1-hit kills.

In the forest of the first stage the wave weapon is good to deal with all those drones sitting behind roots and trees. I prefer to use vulcan in the second stage in order to have enough coverage to blast all the destructible rocks, and anything is fine inside the fiery cave of the third level. The open space of the fourth stage is deceiving because if you die there it might get tough to get things back together. Everything considered, Curse isn't really a hard game up to that point, so maybe that's why Micronet decided to add a single checkpoint to the last stage (die anywhere and restart the level). This adds a bit of difficulty and gives some use to the benevolent extend scheme that grants an extra life for every million points scored.

Most of the time I completely forgot I could use button A to trigger screen-clearing bombs, when in fact they're very handy to handle cluttered situations. You won't see any item to be collected for extra bombs though. Bomb stock is increased by taking successive weapon power-ups after you've maxed out firepower. Example: with a maxed out wave gun, each successive W icon will give you an extra bomb. By pressing either A, B or C + START at the title screen you can have access to very basic configuration options. Unfortunately there are no additional difficulty settings and no way to remap buttons, but it's possible to select any of the first four stages as the starting one.

In between the frame rate, the unremarkable challenge (bosses are all wimps) and the botched scoring system, the best quality of Curse is definitely the excellent soundtrack. I'm very fond of the themes for the first and the last stages, and they pretty much make the game worthwhile for me. Once I got the final stage down I started experimenting with different weapons and places to find how to exploit the last boss's projectiles for points. Then I left the controller shooting by itself for a while until I noticed a graphical glitch as the boss stopped throwing rocks at me. Finally I died and proceeded to beat the game with the score below, never mind which 1CC score I had previously. 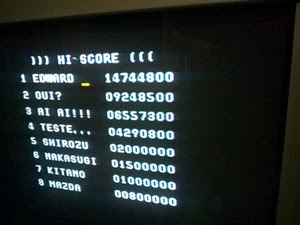