Cartoonish design, primary color shades, thick lines, good music and elementary gameplay can all be used to describe Sky Ninja War on XBLIG. On the other hand, slow and consequently boring action is also in order. At least that’s what probably comes out as a first impression of this little shooter, which like many others allows its good ideas to be engulfed by an overall lack of discernment that holds the game from fulfilling a higher sense of achievement. Was it that complicated to make things a little faster? Was it that complicated to infuse the scoring system with a little more substance? Was it that hard to put such nice art design to better use?

I could go a bit further with my egotistic complaints, such as why developers simply refuse to pay attention to genre conventions. But I know I’d be sounding as an elitist prick because, you know, who the heck cares if the game’s score keeps adding up when you continue or the whole set of in-game achievements pushes players to amass more points by doing that? I’m not a developer myself, I’m just a player. Not a casual one, which seems to be the public at which Sky Ninja War is aimed at. But I like the style, I like the simplicity and I don’t want to be left out of this quirky colored party. So here I am. 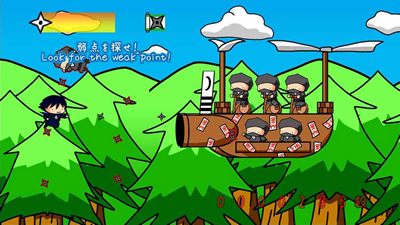 Ninjas in the sky with shurikens

The premise of Sky Ninja War is that you’re a ninja who’s capable of flying, while most other ninjas must somehow use artificial measures to take it to the skies. Kite-flying ninjas are the bulk of them, but they’re also very fond of backpack engines and propellers. Since this is a war disguised as a shooter, our cute little big-headed ninja fights alone against his enemies in five stages of progressively increasing difficulty. That first level in the forest is sleep-inducing, but by the time you reach the last stage you’ll certainly struggle to keep that health bar in safe levels until you reach the final boss. After all, you can only count with that single amount of health to complete each stage. There are no refills, and once that bar is depleted it’s game over and then continue or back to the start.

Unfortunately you can’t remap the controls, which work with × for shot, A for slash, B for change in shooting direction and LB/RB for weapon switch. The slash attack has a very short reach and besides inflicting damage it’s also capable of blocking most enemy projectiles. By defeating a boss you’re awarded with a new weapon, and that’s where the weapon switching buttons become active. The initial weapon is the ever-present-in-the-ninja-world shuriken, which acts as the most basic shot type. In the second stage you acquire the ability to pierce through everything with kunai knives. However, the kunai is weaker than the shuriken and has a lower firing rate. Then you get bombs, fire and thunder during the rest of the game. Bombs are the only type of weapon that can nullify enemy bullets, whereas fire is weaker but can home on enemies. Thunder is the most powerful of them all, but the severely capped firing rate demands very good timing in its use.

The forest theme is followed by desert, skies, marsh and the insides of a ninja castle, with each stage divided into three sections plus a boss fight. Everything is very bright, with very basic cute animation and a constant slow pace throughout. Moving around and dodging is made easier by the small hitbox provided by the spinning shuriken in the character’s chest. Just beware of broader attacks and be savvy when slashing. It’s pretty common to get hit while doing this, especially when trying to take down an incoming enemy. Once you get to the third level you won’t be using shurikens or kunais anymore, such is the underpowered nature of these initial weapons. That’s also when the game starts mixing more enemy types and progressively filling the screen as the action unfolds. It’s just a little disappointing that Sky Ninja War takes so long to actually show some claws and start wiping the initial impression of being a snooze fest. Most people won’t have the patience to wait that long or even abide by the rules imposed by the capped firing rate, since the whole challenge is clearly built around that.

So the built-in edit function of the Avermedia Game Capture HD II works!
(removed a chunk of footage of when I needed to pause in stage 2)

The scoring system is as simple as it gets: one point for each killed enemy ninja, and that’s it. Stationary hazards, such as the cactuses in the second stage, aren’t worth anything, as well as bosses (you can, however, milk the cannonball ninjas during the fight against the first boss for a few more points). Unfortunately score tracking in Sky Ninja War requires special consideration: continuing sends you back to the start of the section but doesn’t reset the score, which in turn is added to all previous scores in the “results” table. This means that you need to erase the save file every time you want to play a clean credit and somehow preserve your performance once this credit is over. The built-in achievement system titled “ninja training”, of course, is totally worthless in this case.

Excluding the slight delay when switching weapons and the awkward button lay-out that might be the cause of my thinking some of the inputs were unresponsive, Sky Ninja War is simple and charming enough to cater to all types of gamers. It might not be as frantic as the majority of shooters out there, even by XBLIG’s standards, but it does offer a peculiar kind of rush. At first I thought it would be a nice introductory title for children as well, but that’s not quite true even when you set the game to Easy – a mode that allows the player to start a credit will all weapons already available. On the other side of the spectrum, Hard plays like Normal but implements the cruel scheme of a 1-hit death with no lives whatsoever. 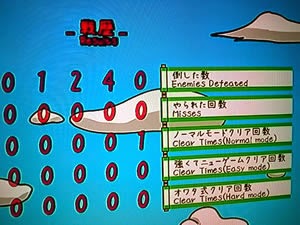