Action Fighter didn’t really belong to the lower and more unknown rank of Sega arcade games, but it does seem to be the case considering how obscure it is. Coming out in between the most successful titles developed by the company, the arcade game got easily eclipsed by the likes of Out Run and Thunder Blade. Of all ports released for it, the most famous is probably the one made for the Master System soon after the arcade board hit the market. By all means it’s a very primitive-looking shooter, but given how early an entry it was in the console library I believe this 8-bit version of Action Fighter pulls quite a stunt with its meager 1 Mega power tag.

Taking direct inspiration from (not to say shamelessly cloning) Midway’s racing shooter Spy Hunter, Action Fighter blends the style of the competition with more traditional vertical shooting sections. Lots of compromises were made while adapting the arcade material, but at least the Master System game is able to retain the original frantic atmosphere that keeps you on your toes all the time. Make no mistake, the high degree of randomness in the gameplay makes Action Fighter one of the hardest shmups on the Master System. Nothing is etched in stone and lots of practice is needed to overcome the challenge of completing five missions commissioned by the president himself.

Some information sources point to the fact that the motorcycle you start the game with is the same one from Sega’s own classic Hang On. The initial objective of the player is to destroy enough enemies in order to collect the necessary alphabet letters to make this motorcycle turn into a car, these letters being A, B, C and D. Button 2 is used to shoot in both forms, while the combination of buttons 1 and 2 switches between motorcyle and car forms. By collecting further letters E and F you enable the car to automatically turn into a flying vehicle at a certain point in the stage’s course (prior to a bridge), and then this jet-car takes into the skies in standard shooting fashion. The action continues like that until the flying car lands by itself back into another driving area.

I want to fly!
(courtesy of YouTube user Enrique Garcia)

During the driving parts you’re allowed to go faster or slower depending on how high you are on the screen (press ↑ and ↓). While you need to pay attention to the road signs that warn you about turns and splits, it’s often safer to drive faster in order to avoid getting touched by vehicles coming from below, but not so fast as to overtake the incoming cars and trucks. Getting rammed by an enemy and sent against the sides is deadly. Powering up the vehicle is done by getting inside the SEGA truck that appears from time to time: just align the motorcycle/car with the truck and see it get in and out, first with a double missile upgrade, then with a homing missile to be fired against helicopters (only in motorcycle form) and finally with 15 seconds of invincibility. Dying rips you off everything, except for the alphabet letters already collected.

During the flying parts it’s obviously not possible to revert back to motorcycle or car forms. Button 1 is then used to drop ground bombs in the famous Xevious style. In these sections upgrading the jet car’s firepower is done by means of small colored Ps that appear randomly. A yellow P serves as a single weapon power-up (get missiles), a white P works as speed-up, the green P is a screen-clearing bomb, the brown P corresponds to an extra life and the blue P gives you the temporary invincibility. From my experience, the great majority of the items consist of yellow and white Ps (power-ups and speed-ups). The others are very rare and I never got more than one of each in any of my runs. Just to have an idea, I came across the invincibility item only once.

One might think that going from motorcycle to car and then a flying machine is the strangest aspect in Action Fighter, but that’s actually not true. Just like in its mold Spy Hunter, lives are treated in a very weird way. At the start of the level they’re padded by a timer that starts at 999, and as long as this timer doesn’t reach zero you’re allowed to die without any consequence on your actual life stock (at this point dying only slows you down). Once the timer expires you’ll finally be playing with the regular life stock, where dying takes away a life and brings you closer to the GAME OVER screen. The real purpose of the timer is to cut you some slack towards surviving, since the better you play at the start of the level the less you’ll need to rely on your life stock before reaching the boss. However, while this may be true in the first two stages, the later flying sections are so long that regardless of performance you’ll be pretty much at the end of the timer when starting the intermediate driving section.

There are almost no bullets to be dodged in the driving parts of Action Fighter. Danger comes almost exclusively from other vehicles trying to ram into you. By the way, don’t feel bad by taking down those ambulances, they won’t think twice before doing the same to you. The only driving enemies capable of shooting at you are the 3-wheel motorcycles that appear from stage 3 onwards and the helicopters that drop bombs when reaching the top of the screen. To get rid of them you need to revert back to the motorcycle form and fire guided missiles with button 1, provided you’re upgraded to level 2 at least. If not don’t worry: just revert back and forth from car → motorcycle → car. Most of the time the helicopter gets scared and runs away when you do this. Remember that the car form is a lot more stable than the motorcycle, which is weak and prone to being run off the road by any other type of vehicle. 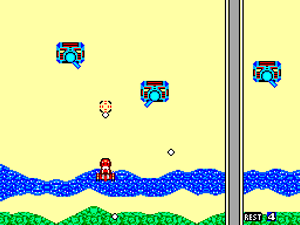 Gameplay rules change dramatically as you enter the flying area. Helicopters, drones, rockets, dirigibles and heat-seeking missiles all appear in different formations, and each one of these enemies must be dealt with specific approaches. Tanks, boats and harmless buoys, hatches and cars comprise the terrestrial opposition, often overlapping their presence with some sort of aerial attack. This wave-based action resembles Star Force, but there are a few aggravating aspects to it such as bullets and enemies being camouflaged by clouds or the awkward hit detection that makes it hard to collect the tiny red flags. I’m not sure, but I suppose these red flags interfere with the item generation routine while adding something to the score (Action Fighter is one of those games that don’t show your score unless you die or pause). Watch out for the cat’s face appearing at random once you collect enough flags... I have no idea what it actually does!

Driving and flying don’t always come in the same order throughout the game. With the exception of the second boss, all other bosses must be defeated while flying. When that happens you’ll continue flying as the next stage starts, with a mandatory landing and another flying section before facing the next boss. The overall enemy firing rate increases level after level, whereas later bosses toughen up quite a bit. They shoot lots of bullets and require lots of dodging. Bosses were the reason why I gave up on the game years ago when playing it with one of those awful stock Master System controllers (everybody knows they suck for precise 8-way movement). This time I went into battle armed with a Mega Drive controller and a Rapid Fire unit. Action Fighter has no autofire, so unless you can mash that button 2 hard you’d better get yourself some means of turbo firing.

Final verdict on Action Fighter? I could say it’s fun, but I’d be partially lying. It's an intense challenge, but it's also repetitive in every aspect you can think of. The soundtrack lacks variety and comes with one recurring theme for each part of the game (driving, flying, boss), but at least the sound effects were handled rather nicely. The main issue, however, is that the game demands too much to start getting fun. Dodging feels a little clunky at first and there are no continues whatsoever. Bullets are always aimed but tend to vary in speed, often cornering you when you least expect it. Most scoring opportunities are left for the end of the game because the final boss is worth a lot more points than all previous bosses. There’s an extend routine that grants roughly one extra life per level, but you’ll only see changes in the life stock when the timer phase ends or when you pick up the brown P.

My 1CC high score is shown below. You need to enter your initials/name before starting the credit, just like in the arcade version of Side Arms. 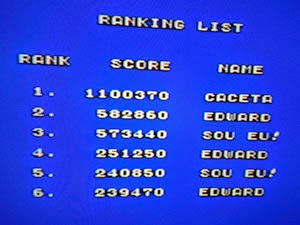