One of the selling phrases of Shooting Towns, a development package released for the FM Towns product line in 1990, is "games people are playing in the 90's are games they are making". As cool as it might have been back then, Shooting Towns unfortunately lacked any sample game so people could know what to expect from the available design tools (an absence that was corrected in the revised release Super Shooting Towns). In order to broaden the appeal of Shooting Towns, soon after it hit the market developer Amorphous compiled ten games developed by common users in a CD titled Excellent 10.

While an extremely rare item these days, going by the quality of the shooters it contains Excellent 10 is more of a collector's prize than anything you'd actually want to play. In all honesty, all shooters in this compilation aren't even close to the standards of a 32-bit gaming machine. It's downright embarassing, especially when you compare this material to what Dezaemon on the SNES is able to offer even though it came out four years later. Most of the games in Excellent 10 present poor frame rate, uninspired graphics, lousy sound effects and an annoying lack of autofire. It's no Action 52, but saying they look like 8-bit games is no exaggeration. In general they've also got subpar challenge levels, even the ones that carry a bizarre nature that's often good for laughs or geek talk. At least each game has and ending, if that counts for something.

Let's now take a closer look at Beams. First of all, there's nothing in the game that reflects the title. There's no beam anywhere, neither laser, plasma, fire, smoke, dirt, whatever. Beams is actually insect-themed, but across its six stages the player will not find any noteworthy variation in the enemy gallery composed of small bugs or bug bosses that wander around the screen in banal and repetitive movement patterns. Environments consist of forests, corridors/ravines, skies, outer space, industrial landscapes and something that's supposed to be the bug lair in the final level. Button A is used to shoot, button B has no function at all and it doesn't get more complicated or simple than that.

Weapon selection is performed by taking the icons left behind by destroyed enemies. These icons carry a letter inside, but the game's resolution is so bad that recognizing the letter in those circles is harder than memorizing their color schemes. Here's what you have at your disposal:


Laser is the only weapon that comes with natural autofire, but most of the time it's just better to go with S and mash the button to cover a larger area of the screen. Each weapon is already in its final form, with no upgrades or any additional bonus gained by collecting the same item multiple times. Speaking of bonus and scoring, this part of the game was seriously overlooked in Beams. Some of the enemies you kill aren't worth anything, and as much as I tried to understand the logic behind this I just couldn't. It seems our developer friend simply forgot to add point values to them. Another hint at this oversight is that no matter how well or bad you play the initial level you'll always reach the first boss with 6.600 points. 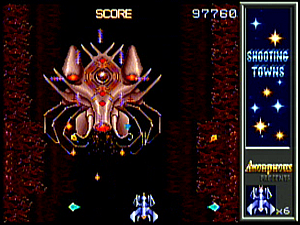 "Are you by any chance my big daddy?"

If it weren't for the benevolent distribution of 1UPs (the small purple insect items), Beams wouldn't be such an easy game. I won't say cheap deaths abound, but at times it's hard to see enemies or bullets due to the bad choice of colors. As if the abundance of extra lives wasn't enough, there's also an extend routine in place which I didn't really care about. The maximum amount of lives you can have in stock at any given time is 8, so in the heat of the battle you don't need to get out of your way to collect more 1UPs if you're full of them. For what it's worth, upon dying you can continue at the start of the current stage by pressing SELECT. START will send you back to the start screen.

The catchy nature of a few musical themes and the contrast between music styles and atmosphere has a reason: judging by the re-use of the same tracks in multiple games, apparently most of the music in Excellent 10 was slapped onto the user-developed games by Amorphous themselves.

As you can see, there's really nothing special about Beams. Once beaten, the game stops at a single ending screen and you won't be able to see the extra 20.000 points you got for defeating the last boss. Here's my best result, taken before that ugly head bit the dust. 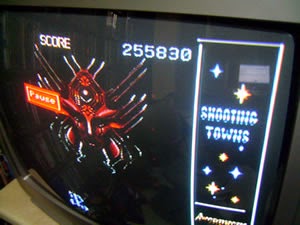 Notes: whenever you boot one of the games in Excellent 10 on the FM Towns Marty you're given the chance to select between under scan (31,47 kHz) or over scan (15,73 kHz) displays; in order to get back to the OS screen you need to reset the console. Those who're wondering if they should expect at least a little variety in the other titles from this compilation, well... Don't get your hopes up, unless you care about bizarre shooter/racing hydrids and anime pedestrian shooters. But that's another post for another day.
Posted by Edward at 2:00 AM