When Taito designed Gun Frontier the world of vertical arcade shooters was starting to transition into something more complex, so the game already looked kinda old. Nevertheless its influence is not to be neglected no matter how obscure the game became over the years, after all it planted ideas that would somehow make their way into more famous titles such as RayForce, Battle Garegga and Under Defeat. On the Playstation 2 it's possible to play Gun Frontier by means of the Taito Memories Vol. 2 (Japan) or Taito Legends 2 (US and Europe) compilations.

Just a few notes of warning regarding these PS2 discs: 1) in the European edition of Taito Legends 2 all games run at a slower speed regardless of your console's native frequency; 2) on the Japanese disc Gun Frontier is initially locked, so in order to have access to it you must play a handful of other games for at least one hour each or simply go to the start screen, highlight "START" and enter L2, R2, R1, L1, SELECT and START; 3) unfortunately none of these collections has a TATE option for vertical shooters.

Though it might seem the case, this game has got nothing to do with the manga series of the same name produced in the 70s. In the year 2120 space pirates are attacking planet Gloria, which was colonized by humans and somehow developed as a mirror of the North American wild west era. The objective of the pirates is to extract the gold in the soil of Gloria, to which the only opposition is you as the pilot of a very special plane. Many people don't even notice this interesting detail, but take a closer look and you'll realize the plane is actually a gun with wings. How cool is that? The idea of guns in warfare design goes beyond that and encompasses the whole game, creating a unique setting that stands as the single most charming thing about Gun Frontier. On the other hand, gameplay couldn't be more dire due to the lack of autofire and the sluggish speed of the flying gun. Autofire can be at least artificially obtained with a turbo controller, and I heartily recommend that if you want to tackle this particular port. If you're one of those purists who think mashing buttons is the embodiment of fun, well... be my guest then. And good luck. 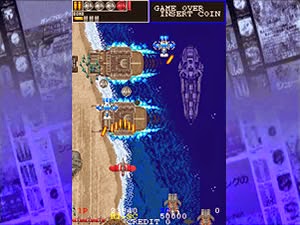 That beach is dangerous, don't go anywhere near it!

Following one of the spookiest intros to a shmup I have ever seen (it's borderline horror), the player is treated with a very cinematic and powerful entry for his fighter plane as soon as the credit starts. Only two buttons are used: one to fire your guns and another to bomb (both fully configurable, as well as the "insert coin" button). Simplicity is quite deceiving in this case, for success isn't directly related to blowing shit up from start to finish. Gun Frontier is a tough beast to tame, and "tame" is exactly the right word to be used because this game belongs to the category of shooters where enemies have random behavior, which throws strict memorization literally out the window. Not only does it get considerably harder as you approach the end, but it also increases bullet density the more lives you're able to stock. This rank system is as straightforward as it gets, but it can certainly kill a credit if the player isn't focused enough.

Powering up the main gun is accomplished by collecting the coins left behind by destroying a specific wave of five enemies that always arrive in a single horizontal line. It takes five coins to add one upgrade level to your firepower, max power comes with 25 coins and a few more will leave you with a reserve of 1-coin max power upon death. Dying will strip you off one upgrade level, which is good, but try not to die three or four times in a row or the credit will be in serious trouble because you'll be back to the weak default shot. Bombs are independent of life stock and depend on the gold bars collected from destroyed tanks. A new bomb is granted for every 25 bars you pick up, but even when you're out of "complete" bombs you can trigger whatever you have in stock, however with a less effective blast. By moving the ship upon detonating the bomb the player can control the direction where it will blow, kinda like in a napalm trail.

Gun Frontier adopts a rather singular checkpoint system: they're active during the levels themselves but completely absent during boss fights. And the further you are in the game the more spaced checkpoints get. This scheme leads to a few interesting approaches to the gameplay: is it better to use bombs to get through tricky sections, or should I just hammer it away in order to get the end-of-stage bonus no matter how many lives I lose? Each full bomb gives you 10.000 points (a single gold bar = 200 points). It might seem that lives don't interfere with the scoring system but they actually do: at the end of stage 5 you score 30.000 points for each life in stock. The final level behaves like a bonus round by making you invincible and granting you MANY points for destroying those flying guns. And then the final boss challenges you to a good old sunset duel: the plane is zoomed in and you get six bullets to try to hit him while his shields are down. Fail and gain a GAME OVER regardless of how many lives you have, a bad ending and no 1CC (the high score table will show your score ending in stage 6). Succeed and reap your 1CC reward.

By the way, succeeding in this game requires lots of practice. Every single bullet or enemy spread is aimed at the player. With very few exceptions bullets have this thin, elongated shape that take some getting used to as far as dodging goes. Ground enemies are easier to deal with, but learning how each specific flying enemy behaves is essential to stand a chance at winning. Some of them will tend to approach your position, others will ram into you and a few will just drop their bullets and leave. By far the most annoying ones are the blue ships that draw closer and closer (dark blue) or move around to fry you from the rear (light blue), as well as the green planes of the final level. Faced in small flocks they're not that problematic, but wait till several other types of enemies decide to unleash a simultaneous attack. Even though the term "bullet hell" wasn't around by 1990, it sure finds a home here. And the only way to win is by devising good placement strategies and raising your herding skills to the standards set by the game.

Even though Gun Frontier might seem drab on the outside, it's obvious the game packs a remarkable challenge. Although visually similar to titles like Flying Shark or the 19XX series, it offers a completely different vibe altogether. Slowdown is minimal but you're already so slow that when it happens you won't get anything good out of it. There are a few secrets here and there related to specific places where bombing can result in sudden score spikes, namely the hidden spots for 10.000 points at the beginning of the 1st and 4th levels and the huge blue spaceships that clutter the screen in the 2nd stage. If you bomb at the right places it's possible to start the third level with five lives in reserve, considering you get an extra life with 20.000 points and another for each 80.000 points afterwards. As for the  soundtrack, I think it fits the game well. I quite like the theme for stage 2.

Much of the game's legacy can be measured by the outspoken praise given to it by Shinobu Yagawa, the strong man behind Raizing and one of Cave's main developers. Pretty much all of his games use the same bomb scheme of Gun Frontier. In the particular case of Battle Garegga the influence is also aesthetical, as indicated by the overall graphical style and enemies exploding in puffs of spiralling smoke here and there. There's an obscure reference to the game in the opening text of Metal Black, whose story was at one point supposed to connect to the story of Gun Frontier. And it might be just a coincidence, but the peculiar checkpoint system used here went on to appear in Warashi's Shienryu.

Click for the option menus translation for Gun Frontier on Taito Memories Vol. 2

Besides the Playstation 2, Gun Frontier was additionally ported to the Windows PC, the Xbox (also Taito compilations) and the Sega Saturn. It is known to be an easier game on the Sega Saturn due to the implemented autofire feature of that particular port a severely toned down rank system. My period of fun with the PS2 version ended with the score below on Normal difficulty + a turbo controller. Going by the game's attract mode I reckon Gun Frontier must be a good pick to play with a friend in co-op. An extra winged gun would probably even the odds against that space pirate scum. 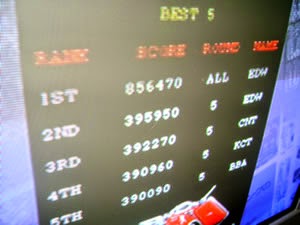