We love shooting games, so here we go again! Coming after Parodius Da! and before Jykkiou Oshaberi Parodius, Gokujyou Parodius is the third official entry in what’s probably the most messed up Konami shmup series ever, as far as console ports go. Those who are familiar with the concept behind the series need no introduction, whereas everything newbies should know is that all you see is somehow referencing a few other Konami franchises, of which Gradius is the obvious main inspiration. Stages, themes, weapons, details. In Gokujyou, however, you can easily notice that the gameplay starts to deviate from the core Gradius style into something more particular and unique. Besides, it expands on the previous chapter in all fronts except the number of stages.

The Japanese Sega Saturn disc titled Parodius Deluxe Pack is a must-have item if you’re into the series because it bundles Gokujyou Parodius with Parodius Da! in a single package. This compilation was also released in Europe, though with slightly different names for each game (Gokujyou is renamed as Fantastic Journey). Judging by the Japanese version, the good news in the case of Goku Paro is that the porting job is as faithful to the arcade original as possible and does not incur in the same issues that make Parodius Da! elusively different from its source material (toned down difficulty, botched scoring system and the inclusion of a hidden stage). Going from one game to the next in this compilation can be a shock due to the higher challenge level of Gokujyou, a game whose appreciation depends a lot on the character you choose and on a very important choice you need to make at the start of the credit.

Remember the Gradius power-up system? Collect orange capsules to light up the cells in the weapon array and activate the desired power-up to upgrade the ship/character (for every few capsules you also get a gray one that works as a smart bomb, as well as a yellow bell). All characters share the same pattern for the weapon array: speed-up, missile, upgrade 1 (originally known as double), upgrade 2 (originally known as laser), option, OH! (clears all upgrades) and shield. I made a distinction between “upgrades” and “originally known as” because all new characters come with weapons that are completely different from the mold long established by Gradius and used until Parodius Da!. In some cases even those good old options can behave in an awkward manner.

Four characters join the regular roster of previous chapters: Hikaru (a bunny girl riding a rocket), Mambo (a flying fish), Michael (a flying pig) and Koitsu (a stick figure on a paper plane). All new characters carry a wildly different assortment of weapons not typical to Gradius, some of them inspired by other Konami games or even series from other companies. Michael, for instance, has a wave shot and a shield reminiscent of Darius, while Mambo fires a cool set of bending and homing lasers. Vic Viper, Pentaro, TwinBee and Takosuke haven’t changed much and sort of preserve their arsenal. When chosen as player 2 all characters have different names, related to their origin or not. For example, Lord British is to Vic Viper what Gabriel is to Michael.

With the exception of the options/start screen, everything else in the game is in Japanese. That’s really unfortunate for unaware players who don’t understand the language because once the character is selected and you need to choose the power-up mode you won’t be able to correctly interpret what’s on screen: in “Auto” players use only one button to shoot while the game is in full control of the power-up process; in “Semi auto” the player can also trigger upgrades with a second button, sharing control with the computer; “Manual” is the classic scheme with three buttons, one to shoot, one to upgrade and another to trigger bell powers. Controls work with A for power-up, B for shot (autofire on Y/Z) and C for bell power. Note: on “Auto” and “Semi Auto” bell powers are activated with the shot button.

The biggest catch about Gokujyou Parodius is that the “Auto” power-up mode gets rid of checkpoints. Yes, die and you’re respawned in the same place instead of returning to a previous checkpoint. On top of that a death on “Auto” generates four extra bells as a welcome breathing room against whatever bad situation you’re currently facing. Oh, bells… Not those of the jingle kind, but actually the ones originated in TwinBee and promoted to the scoring backbone of any Parodius game… I confess that for a while I hated them with a passion in Goku Paro. Their native color is yellow, but with every four shots they acquire a different color. Collecting successive yellow bells without losing any grants bonuses that start at 500 and max out at 10.000 points, whereas other colors provide special abilities: blue (powerful single bomb), green (inflate + invincibility), white (activates a concentrated shot of random messages in kanji), brown (three vertical energy bars) and purple (turn all popcorn enemies into power-ups/bells). This is also the order in which the colors cycle for single-released bells - the ones that come in batches by killing those birds often cycle randomly. Important: taking any colored bell will remove the shield instantly since you can’t have both active at the same time.

Realizing the importance of the purple bell as a powerful resource for scoring is easy. The best example is on the fight against the first boss: prepare to take a purple bell when the dancing panda starts to toss debris all around and reap lots of power-ups (100 points each) and several more bells, keep seeding purple bells and repeat for a while before the timeout. Of course that’s easier said than done, since pulling off such a stunt requires lots of practice. I tried to do it for a while but soon I gave up to focus strictly on keeping the 10.000 yellow bell chain going. That’s already a challenge in its own because Gokujyou adopts a very steep and tricky rank system that demands exquisite knowledge of levels and resources if you want to survive longer. 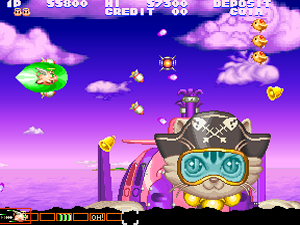 Michael and his Darius-inspired shield

One of the ways to control rank is to refrain from powering up. However, it doesn't take long to see that you need firepower to score/survive. A mid-term between controlling rank and scoring optimally is very hard to find because things get more intricate quickly, and depending on where you die it’s really tough to get back up, especially when playing with checkpoints. I played on Manual for a long while and almost burned out on the game because I was often raped in the outer space level. At first I played with Michael, but by the time I switched to Auto power-up mode I also had a change of heart to Koitsu, undoubtedly the best character in the game. Gokujyou still remains very challenging though, but recovery from deaths are considerably more manageable without the checkpoints. There are only two score extends, and making the best out of them is essential to complete the game.

Overall, choosing Auto and ditching checkpoints comes with way more advantages than disadvantages. One of the greatest pros is the automatic control of all power-ups and roulette items, so you don’t need to worry at all about activating the OH! downgrade. The computer will apply speed-ups when clearly needed (in the high speed and moai battleship levels) and adhere to a single weapon when powering-up, but the shield will only be triggered after you have exhausted all possible upgrades. Another example of the benefits of automatic power-up control is having another shield ready for when the current one expires. I classify as disadvantages the inability to stock bell powers and the fact that you can’t trigger more speed-ups at certain parts of the game, such as when you die before the boss that fires ghost bunnies. Some final notes about bell powers: the green bell is excellent to get through troublesome sections but you lose much of the control over other bells; the white bell is the worst one because you can’t hit any other bell when it’s active.

Somehow I feel that the best of Gokujyou Parodius is in its second half. The nicest graphical/musical themes are left for the end, and from the high speed stage on the game clearly picks up in pace and challenge. It opens with a Carnival-themed level and proceeds with a tropical/underwater stage, another candy-filled level, a high speed chase, an outer space area, a Japanese bunnyland and the final fortress. There’s also a randomly placed level with a moai battleship and a special bonus stage that takes place after the credits, has rearranged music from TwinBee and sends the difficulty through the roof (the game does not loop, but loops can be actived in the options if desired). Of course the absurd representations of Gradius staples abound from start to finish, the most hated in my opinion being Decoration Core, the boss of the candy stage. That’s where I often die, but dying there once or twice isn't so bad in the long run because it makes the following level easier. My favorite boss is the outer space inflated power-up, that thing is cool. And benevolent. And cool. :)

Let it be known that I started playing the game on the Playstation, but then moved to the Saturn for a very particular reason: it's got random extends - sometimes you get them at different points and sometimes they don’t come at all! There are other reasons why the Playstation port is a clear loser in this case, such as abusive slowdown (almost unbearable in the candy level), longer loading times, manual save function (automatic on the Saturn) and weaker sound effects, among other minor things. The Saturn port put a smile back in my face and gave me a great time until the 1CC and the unlocking of the special stage at the start screen. In the end I played with Koitsu on Auto power-up mode at full defaults (difficulty 4, arcade aspect ratio). 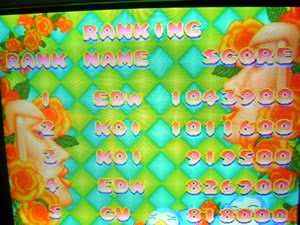