I feel a little sad when certain video game releases are "too" Japanese, since this often tends to detract from their appeal in other markets. Game Center CX - Arino no Chōsenjō (Arino no Chōsenjō means Arino's Challenge) is a prime example of this: a compilation title originated from a TV show where a comediant would talk about old video games and try to beat them. Luckily for a few Westerners, the cultural barrier imposed by the language was gone when a translated port appeared in the US as Retro Game Challenge. Unfortunately it failed to garner attention and was eventually considered a failure by its publisher, botching any plans the company might have had of also porting the sequels.

Game Center CX has lots of options and menus, many of them leading to libraries, galleries and boring dialogue (for me at least). Of course one can go directly to Retro Game Challenge for an easier interface since the Nintendo DS has no region lock, however I made the choice to get the Japanese package so I had to deal with all that foreign text… which is a challenge in itself, but fortunately finding what really matters – the games – isn’t hard at all. These span several genres and come presented as Famicom/NES titles, complete with fake developers and release dates. The shmup highlight is Star Prince, “released” by Tomato on 6-JUN-1986.

Star Prince owes a lot to the likes of Star Force, Star Soldier and early outings of developer Compile. Much of its design was, in fact, influenced by Shinya Arino’s Star Force challenge in one of the first episodes of the show. The result is a fun and fairly charming homage to these old classics, one that fits the DS format well and doesn’t make you struggle with the secondary screen, unless you decide to have fun inside the virtual game room and you’re bothered by the two boys who’re supposedly watching you play. 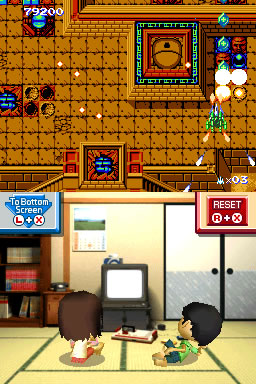 Princes, princes who adore you...

In all stages players must fly over terrains full of turrets and destructible blocks, dealing with the mandatory stops against bosses and mid-bosses and all sorts of incoming aerial waves that approach from everywhere. Button Y provides autofire while buttons A or B fire a single shot and activate a shield when held, a protection device that initially covers the front of the ship but is automatically upgraded to a full circling barrier once you take the first power-up. Power-ups are always released by a particular ground enemy and consist of P (power/straight shot), S (spread shot), B (back shot) and M (missile shot). There are no upgrades beyond acquiring the characteristics of each weapon, but the lack of further levels of firepower couldn’t be more deceiving. After all, Star Prince’s gameplay is much richer than what the basic inputs make it out to be.

Everything you shoot and destroy is worth some points. There are certain targets, however, that can lead to a lot more points when you manage to destroy them in a certain way. Every weapon item released, for example, can be destroyed with a few shots. When it blows up, all enemies and bullets on screen are also destroyed and over their amount a multiplier of ×1.000 or more is applied (huge points can be scored from that!). You can also choose to collect the same weapon you're already carrying, which is then worth 8.000 points. Every once in a while enemies will stop coming and a ship will materialize at the center of the screen before an attachment comes from below: destroy it before the attachment latches and win a big bonus. This might seem familiar to some, since it pretty much copies a similar enemy from Star Force.

Another easy source of points, provided you know their locations, is uncovering the six tiles in every level for the characters that form the word PRINCE. By uncovering them all you win 40.000 points, and for each one you miss this amount is divided by two. An extra life is also hidden in a specific place in every stage, and to get it all you have to do is hit its hidden spot. Finally, since I'm talking about the scoring system, at the end of the game each life in reserve is worth 50.000 points. By end I mean the second loop because the game is bold enough to go DDP on you after you beat its four levels, saying that all enemies were not real and you must play the game again to face the real ones. And with all the extra score-based extends (50K, 100K, 200K, 500K, 1M, …), not dying ends up being the biggest addition to a credit aimed at high scoring.


Cruising the stars for a crown!
(courtesy of YouTube user IGN)

The second half/loop of Star Prince is obviously harder than the first, with the added quirk of changing around all locations for hidden items (characters and 1UPs). Since the bullet count is increased, this is when you'll be using the shield input the most. A neat feature of the shield is that after absorbing three bullets the ship will expel an outward blast that's able to hit everything around it. While definitely a life saver in tight situations, the shield doesn't protect against enemy collision, and these may happen a lot due to waves coming from behind and closing in from the sides.

Putting everything together, it's feasible to say this little game is a blast to play. It uses the same wave scheme of Star Force, meaning the fastest you dispatch a wave the more enemies you'll kill before the stage is over. Sometimes the checkpoints will mess with enemy/wave order, making them less or more difficult up front. Several turret arrangements in the mid-boss sections and the brief invincibility upon item collection will immediately remind people of Zanac, which is just a hint at how much Compile is infused in the gameplay, morphing with Tecmo and Hudson into a nice piece of handheld shmup rush. The music and the sound effects are equally competent, and the occasional voice samples just serve to add that odd flavor you'd expect from a Japanese title. 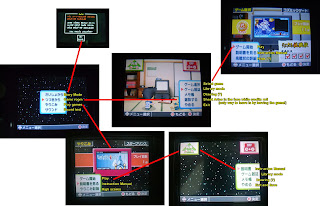 Click for the (lousy) option menus translation for Star Prince on Game Center CX
Any help would be greatly appreciated :)

During gameplay R+X works as a reset button and L+X calls up the main menu, from where you can select other options such as switch to another game, check the instruction manual, etc. Since I’m not versed at all in Japanese, I can’t comment on anything else about Game Center CX.

My humble final 1CC score for Star Prince is below. The game halts at this final panel before you're sent back to the start screen. And just like in good old 8-bit fashion, there are no continues! 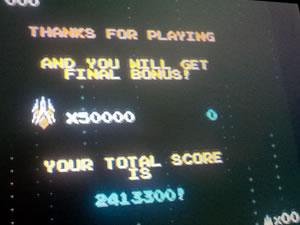