If you want to know which were the worst shmups ever released for the NES, leave it to developer Thin Chen Enterprise, also known as Sachen, to educate you on the mediocre side of the shooting force. Some might argue that this not-so-honorable distinction should actually be attributed to Mega Soft, but in my opinion Sachen wins. We can’t even say it’s a matter of quantity over quality because quality is a characteristic that’s sorely lacking in any of these companies’ outputs.

That said, let it be known that this extremely rare game called Tasac represents Sachen’s magnum opus of ineptitude. With the exception of Huge Insect (which manages to be even rarer), it was the last shmup produced and released by Sachen. Looking from the outside I had hopes it would somehow improve a little over their previous stuff, but oh boy I was wrong… The box art is interesting, as well as the deceivingly decent opening screen, but everything falls apart after you press start. Monotonous action, dull enemies, stupid power-ups, botched interface, drab colors, empty backgrounds, atrocious music, screwed-up resolution, it’s all there in pathetically executed 8-bit programming. 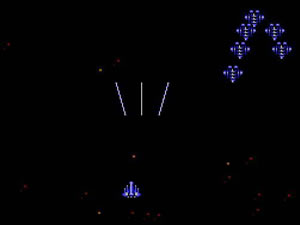 In outer space no one can hear you yawn

In the world of Tasac the player is fighting against alien bionic mutants. The problem is that the spaceship you pilot is a generic piece of junk capable of firing three types of shot with button A, according to items released at random by destroyed enemies. You have L (straight shot), F (five-way shot spread) and T (three-way laser spread), the latter being the default weapon. All of them are upgraded slowly by taking the same successive item or faster by collecting the P (power-up). And that’s it, there’s nothing else to say about the gameplay other than getting familiar with the eight variations for enemies and their recurring naive patterns.

In every single stage the shadow of the boss appears on screen and stays there for a little while before solidifying into the boss itself – an irregular arrangement of turrets that try to protect the core. These increase in size with every successive level, to the point where you’ll have more than 15 turrets to destroy in the final stages. Luckily you don’t need to eliminate them all, so if the core becomes visible a quicker kill can be achieved.

Although the basics of the gameplay aren’t broken, Tasac suffers from many problems that lead to quick boredom. For example, there is only one regular enemy that shoots bullets, and even those might not be considered proper bullets (the enemy ship halts at mid-level and explodes in seven big pieces of junk). All others arrive and move around in a never-changing fixed pattern for you to gallery-shoot them. There is no wave overlapping at all, so as long as there’s at least one enemy on screen or an item released by the current wave the next one won’t come into play. On top of that, all bullets fired by the boss’s turrets are destructible, and later on sprite manipulation becomes so heavy that both bullets and enemies start disappearing without being hit by anything.

In a nutshell, it gets boring fast.


Will I make it to the boss?
(courtesy of YouTube user NesShortGameplays)

Another reason why Tasac is even more tedious than your usual Sachen shooting game is the lethargic nature of your weapons. They’re slow. Very slow. The three-way lasers aren’t that bad once you upgrade them a little (lasers get thicker), but the severely capped firing rate of the 5-way gun makes it pretty much useless, especially against later bosses. The straight shot fares better, but eventually you’ll miss some piercing/side coverage. Just to have an idea of the mediocrity that’s present here all you have to do is check Papillon Gals/Galactic Crusader, which was also delivered by Sachen. It’s kinda close in spirits to Tasac, but seems like a masterpiece in comparison.

Don’t bother checking your score during gameplay. You’ll only ever see it in-between stages and when the credit is over. The same happens with the number of lives and the extend routine that’s hidden by the inability to see the score. Speaking of hidden, watch out for the extended area at the bottom of the screen, which can safely hide your whole ship! And this is yet another case where your shot reappears from the bottom if you hug the upper border of the playing field.

Isn’t there anything good about Tasac then? Well, for all it’s worth it allows co-operative simultaneous play. And the ending shows a neat still of the spaceships flying into glory before, well... As if all of the above wasn’t enough to make you sleep in front of the TV, this travesty loops with practically no difficulty change whatsoever (I tried moving the switch in the cartridge case from Old to New and noticed no alterations at all in the gameplay). In the final score shown below I succumbed out of sheer apathy in stage 2-10. 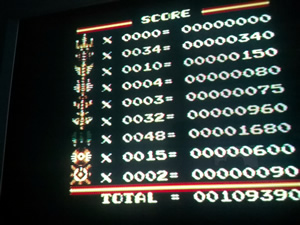