Skull Fang is the third chapter in an unofficial trilogy of arcade shooters that started with Vapor Trail (a.k.a. “Sky” Fang) and continued with the oddball horizontal hybrid Wolf Fang. As well as being a throwback to the gameplay of the first chapter, Skull Fang also tries to improve the original ideas in a few distinct directions (extra ship, time criteria, special moves, more special attacks). Do these work? How exactly did Data East fare in their reinterpretation of the first game, which was actually made less obscure to players around the world due to the port released for the Mega Drive?

I talk obscure because that’s exactly what Skull Fang is, even amongst the most dedicated fans of the shooting genre. The only console port of the game is this one, out exclusively in Japan for the Sega Saturn roughly a year after its original arcade release. For what it’s worth, at least it comes with a few extras beyond a straight arcade port, such as new game modes and automatic save function (plus TATE). However, given the drab nature of the game itself it’s no wonder it fails to garner any special attention. The little it offers up front is too thin to get people excited, and even if you decide to get serious with it chances are you’ll end up underwhelmed by the final experience.

As far as the story is concerned, it seems to be just a rehash of the first game (everything appears in Japanese text and dialogue). Earth is being attacked and you’re the hero, let your only energy bar go empty and watch as the planet gets nuked in a strikingly cruel GAME OVER animation. Besides, be warned that the selections you need to make before entering the cockpit in Skull Fang are a little more intricate than in most other shooters. Here you need to choose the ship, the pilot and a “throttle” style. The overall gameplay and the scoring possibilities can be severely affected depending on which choices you make.

The control layout in Skull Fang is button A for shot, B for throttle and C for special attack/bomb. Each jet is ranked in four categories: attack, defense, maneuver and “accelerate” (read more on this below). With the exception of the Silph-II, which is balanced in all four aspects, all other jets have the edge in a specific category while being weak in another. Their firepower, however, is what mostly defines which jet suits you best. There are four weapons selectable with appropriate items left by harmless carriers: V (vulcan cannon), C (cluster bullets), M (homing missiles) and L (laser gun). Shoot the item to cycle though weapon types and get the desired one, or make it explode into a weak smart bomb by shooting it for a while if you don’t want to take it. Regular power upgrades are achieved by collecting the P item.

After selecting the jet you either choose a fighter pilot (Sparrow or Hawk) or a bomber pilot (Raven or Crane). The difference between them is that fighters deploy the special attack as a rolling feature that renders the jet invincible for a while - as seen previously in Vapor Trail - whereas bombers just drop good old fashioned bombs as special attacks (deciding between the lad or the lady is just a cosmetic choice). Once a special attack is used you need to wait for its energy bar to refill in order to deploy it again. And then there’s the last option to be made before starting a credit, the throttle mode: auto, 2-speed or 5-speed. Contrary to anyone’s first impression, this isn’t related to jet speed/maneuver at all. Its purpose is to allow the selection of different thrust settings - or different scrolling speeds, in a more mundane approach. In auto there’s none, so the game just scrolls in its “natural” way. With the other options it’s possible to get through the stages faster or slower and to chase/intercept bosses as they move about during the fight, in what the jet specs call “accelerate”. Note that 2-speed throttle is exclusive to the Saturn, since the arcade game has selections for auto and 5-speed only (originally called CHASE mode).

Now what’s the purpose of finishing a stage faster? The reason behind this is a timer that appears on the top of the screen only when you select 2-speed or 5-speed throttle modes. Every second remaining when a boss is defeated is multiplied by 10.000 points, a very important bonus for score-chasers that makes auto throttle pretty much useless (even button B serves for something, since it fires single shots). Warning: don't go too slow all the way, otherwise you run the risk of timing out a level and getting an instant GAME OVER regardless of current energy.

On top of all of the above gameplay intricacies, the game also brings back the S-unit from Vapor Trail. A one-time item in every level, the S-unit endows each jet with a powerful upgrade that completely overrides regular weapons. It will remain active as long as you don’t press C, to which the jet reverts back to its original form after a quick explosion. Another aspect of the S-unit is that it allows an extra throttle switch to be activated (T for 2-speed and 6 for 5-speed) and an even more powerful discharge to be unveiled at fixed intervals, a feature that's absent when you choose to play the game in auto mode (no throttle control). 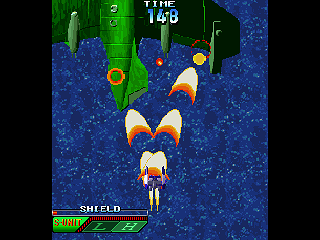 But wait, the gameplay description isn’t over yet. One very obscure trait of Skull Fang is that it allows fighter pilots to perform special moves that temporarily affect the jet’s firing direction, in the very same fashion as you would in a fighting game. For example, use →↓ + C or ←↓ + C to make it shoot left or right. Or ↑←↓ + C to shoot backwards, ↓ ↓ + C to make the jet perform a loop over whatever’s coming from below and →← + C or ←→ + C to trigger a more powerful rolling attack (you can see these moves performed during the attract mode). The catch here is that you can only take advantage of these inputs when the special attack gauge is full (blue). By pressing C it’s possible to cancel all commands before the gauge is depleted, hence recovering it faster for another use, but the inherent problem with fighting game styled commands is always there: in the heat of the battle you're prone to input mistakes, which might result in the regular rolling attack instead of the desired command effect.

Besides the items described above there are also other icons to be collected. If you’re lucky it’s possible to come across a LIFE icon that refills a portion of the lifebar (40% is automatically refilled in between stages). Every once in a while the carrier will drop small skulls worth 5.000 points each, whereas a large skull that bounces around the screen can be hammered for a varying amount of points. And stupidly enough speed-ups are labeled MNV, as in maneuver-up! Really, how dumb is that in a shooter, especially when the differences between jet speeds are minimal and it's impossible to get too fast? Anyway, all excess icons are worth something when collected, just beware of not putting yourself in danger when trying to get them.

When you think about all of the details involved in the gameplay it’s hard not to think well of Skull Fang (despite the convoluted options, of course). The truth of the matter, however, isn’t really that engaging. Even with all the confusion at least Data East tried to beef up the gameplay, but they should also have given some love to the art design. Graphics are samey and poor, and almost everything looks zoomed in for no purpose at all. The enemy gallery doesn’t fare better with its series of disjointed jet formations, a few tanks here and there and lots of those annoying mines that often catch you off guard. Almost every boss runs away from the fight to off-screen grounds, and initially I thought it was just an excuse to allow the special attack gauge to recover. You see them through a smaller window and while it's impossible to hit them in this situation they will launch several attacks against you from off screen. Handling the different throttle speeds is what allows you to alter the conditions of the fight in your favor.

All things considered the Saturn port is rather decent, with only a few flickering areas and slowdown during crowded sections. I also believe the health bars from bosses disappear for too long at times, but I might be nitpicking here. Normal mode corresponds to the arcade game (on Hard difficulty), Extra mode is a rearranged game with slighly different enemy formations/patterns and Trial mode is just your regular boss rush as a long or short campaign (the latter having only four bosses). Besides the timer bonus mentioned above, at the end of each level players receive rewards based on destruction ratio, no damage (1 million points!) and stage clear. These bonuses are the main source of points since regular enemies are worth peanuts.

I'll be honest and say I started having a little fun when I finally figured out what I was doing with my jet/pilot/throttle choices, but then I got fed up of the clunky gameplay and went on to the next challenge. Below is my final 1CC result for Skull Fang on Normal mode (Hard difficulty, TATE), achieved with the Silph-II jet, female pilot Crane and 5-speed throttle. Look how crappy the font for the high score board is, that 6 in the second place looks like a 4! 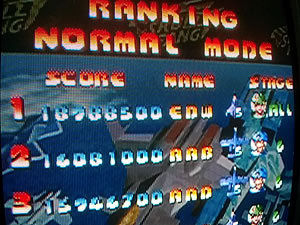