A few weeks ago I revisited Konami’s Salamander 2 on the Playstation. It’s the only sequel to both Salamander and Life Force, and all three games are bundled in a compilation called Salamander Deluxe Pack Plus. Cross-released for both the Playstation and the Sega Saturn, in my opinion either version of this disc is an essential part of any STG collection aiming at a minimum degree of respectability. Truth is if you consider yourself a true shmup enthusiast this is the closest you can get to approachable Gradius gameplay without resourcing to real arcades and PCBs.

Why do I mention approachable?

I know many people who don’t really dig the style of the Gradius franchise, which is famous for its checkpoints and dire recovery conditions upon death (except for Gradius V, of course). That said, it’s important to state that sequel Salamander 2 is more approachable than the first Salamander in pretty much all aspects that matter for the majority of people, which are eye candy, challenge and easiness of recovery upon death. It's developer Konami in top form, in a time before everything started falling apart inside their STG development team.

Besides allowing co-op simultaneous fun, Salamander 2 endows each player/ship with slightly different features, starting with the sprite for the main shot. Up front solo players must be aware that going for player 2 / the second ship (red-tinted Super Cobra) makes the game even more approachable than doing it with the first ship (player 1, classic blue-tinted Vic Viper). This difference is particularly noticeable during the second stage, a vertical scramble amidst sattelites that spit arching fire rings. Whenever you play with Vic Viper those satellites get a lot more aggressive.

In the classic Salamander universe stages alternate between horizontal and vertical scrolling, but here only stages 2 and 6 are of the vertical type. Pick-up items are released by colored enemies or by destroying complete enemy waves and consist of the following types: S (speed-up), M (missiles), L (laser), R (ripple laser), T (twin blade), option, option seed (a "half" option) and force field. Most of them are self-explanatory if you have at least a bit of contact with the classic Gradius gameplay, however Salamander 2 takes a step further in fleshing out the gameplay.

First of all, any of the main weapon enhancements (L, R or T) receives a power boost that lasts ten seconds whenever you pick up an item of the same type you're using. For every M collected missile behavior alternates between regular missiles and double missiles (these are fired below and above the ship, very helpful in stages 3 and 5). Lastly, it's possible to sacrifice an option in an attack that sends it homing towards the closest enemy and returns an option seed back for immedite collection. This is done by pressing a specific button, thus making the game at least a 2-button shmup - if you map shot and missile to the same button, I mean. And whenever you die with a whole set of options they will float on screen for you to pick up immediately. 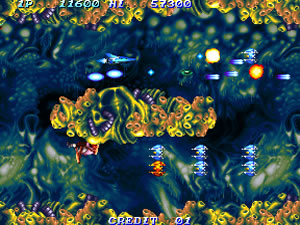 "Where is that Golem?"

While the basic set of inputs is enough to have great fun with the game, a few secrets here and there serve to spice it up a little bit. For instance, that golem brain that appears halfway into the first stage and gets chewed by the boss can be destroyed for 100.000 points if you manage to power up the ship in a specific way. The same can be said about the spaceships at the start of stage 4: destroy them in an orderly manner to get another extra 100.000 points. Some bosses can be milked for a brief while for more points, as well as the flaming arches of stage 2 (don't ever stop shooting there).

With score-based extends happening at 200.000 and 500.000 points, conquering the first loop of Salamander 2 is a challenge that's very much achievable by everyone. During the first loop it's easy to notice that deaths completely reset the rank, instantly making enemy bullets travel much slower. Besides replacing an already awesome sountrack with remixes of the soundtrack for the first Salamander, the second loop adds suicide bullets and amps up the difficulty a good notch.

This time around I wasn't able to top the previous score I made on the Sega Saturn, again piloting Super Cobra (player 2). I only reached stage 2-3, but it was obviously fun to once again enjoy the game with friends from all around the world. Cheers! 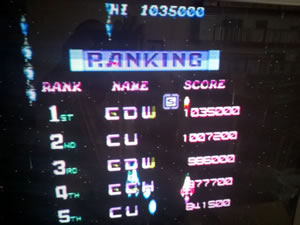