I feel kinda sorry for Gekirindan. For a sprite-based vertical shooter developed by Taito I can’t help but feel it was made from leftovers, before the company shifted to its infamous 3D efforts in games like Raystorm and G Darius. Just to have an idea, both Grid Seeker and Rayforce were released years before but in my opinion pack more punch than this game. I’m not saying that Gekirindan is bad, however it’s certainly a few notches below previous Taito shooters. One could say the gameplay is too conventional for a time frame that saw the shmup scene gearing towards bullet hell and 3D, let alone intricate scoring systems that required more than shooting and bombing.

Even with its ordinary nature, and much to the envy of other assumedly more accomplished arcade shooters at the time, Gekirindan made its way to at least three home consoles that I know of: the Saturn, the Xbox and the Playstation 2. I have just played it again on the PS2, by means of the Japanese Taito Memories Vol. 2 (Gekan) compilation. Unfortunately this particular disc in Taito’s precious arcade collection series (as well as the Taito Legends 2, which also has this game in it) does not offer TATE mode for the vertical shooters. Gekirindan seems to suffer a bit from this since the resolution feels a bit cramped and makes the game slightly harder on a first contact. 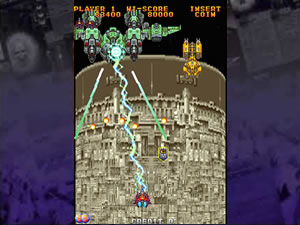 Hokuto unleashes the power of his ship

With a subtitle that translates to Time Travel Shooting, the action in this game revolves around three aircrafts from different historical periods pursuing a villain who’s able to travel through time. Each stage is set in a different year, presented with gigantic bold fonts as you come out of a time warp directly into the action. The chase starts in the future, continues during the World War II days and keeps going back and forth as the evil robotic figure flees from one area to the next. It’s a great idea that gets relatively well established by the graphics and the enemy gallery, only to be let down by the clunky gameplay and by a soundtrack that recycles only one theme from beginning to end. The music is not bad, but amidst the good you’ll also need to deal with gloomy and corny variations – and these are often the ones that stuck in my memory in between gaming sessions.

All ships in Gekirindan use the good old combo of shot + bomb to exert outer space justice. Incoming carriers and special crates release upgrade items in the form of powers-ups, extra bombs (B), shot type change (C) and a last one for auxiliary weapons. The item for auxiliary weapons cycles between napalm (N), missiles (M) and homing lasers (H). It takes 5 power-ups to max out the main shot, whereas the simultaneously fired subweapon has only a single power level activated at the collection of the respective item. These auxiliary weapons behave the same regardless of the chosen ship (see below). There are no extends, but a lonely 1UP can be grabbed if you manage to kill the mid-boss in stage 5 before it escapes.

There are three ship types to select, and two different pilots for each one depending on the side you choose to play (player 1 or 2). Type A, piloted by Hokuto (P1) or Grother (P2) fires a soft blue shot with a mild spread pattern and a 5-way lightning shot that latches onto enemies. Type B, piloted by Anne (P1) or Shario (P2) fires a straight laser shot and deploys trailing options. Type C, piloted by Dietza (P1) or the duo Orsa & Mayoru (P2), fires a vulcan spread shot and a pulsing wave shot. Shot types are switched/selected during gameplay by collecting the C item. Ship abilities and power can severely affect gameplay, especially when you figure out that type C on player 2 is the strongest selection you can make, easily overshadowing all other combinations of ship + pilot.

Scoring devices involve the classic NMNB approach (no miss, no bomb) since each spare bomb is worth 8.000 points at the end of the level. Another direct source of extra points are the golden badges collected from destroyed ground targets, each one worth 1.000 points and another 5.000 points at the end of the level. Finally, surplus power-up items give you 1.000 points. Despite a few easy tricks that help boost the score (destroy the first mid-boss fast to spawn an extra bomb, let the spider-tank destroy the houses in stage 2 for five extra badges), Gekirindan treads a very shady area when it comes to the scoring you can get from bosses. The second boss, for example, continues to puzzle me as to how many points I can get from killing him, and there are also several reports of the same thing happening with other bosses in the game.

Gekirindan is also known for its throwbacks to Toaplan, in a palpable homage to the then defunct Japanese developer. The napalm subweapon is a clear example of this, as well as the sharp bomb animations and the overall vibe of the whole game. Though some might think of this as an unexpected reverence/emulation of the competitor's style, we need to consider the fact that many Toaplan games were actually distributed/published by Taito across the most diverse platforms. These guys were not only great STG programmers, they were also classy gentlemen.

Click for the option menus translation for Gekirindan on Taito Memories Vol. 2

Compared to the Saturn port in YOKO orientation, this rendition of Gekirindan feels really squeezed but at least it does away with the vertical wobbling. Since I decided to stick to the type A ship I needed to refine some of my old strategies to account for the somewhat cramped resolution, which is a little troublesome even on a larger TV set. I was able to no miss the game on Normal with Grother (type A, player 2 side), although I did use a few bombs in the last stage. 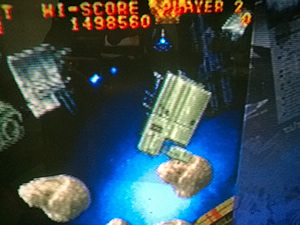