Around here we would say that Rendering Ranger R2 is one of the white flies of the Super Nintendo library. Yes, I know white flies actually exist, it’s just that on a regular daily basis seeing a white fly anywhere is extremely rare. And the same applies to this infamous cartridge released in minuscule numbers only in Japan at the end of the console’s lifespan, which obviously helped its rarity index to increase even more. On the game’s behalf, at least one can state that its quality almost matches its scarcity on both gameplay fronts: the classic platforming elements are a trademark of developer Manfred Trenz (creator of the Turrican series), whereas the shooting sections leave nothing to be desired in regards to action and 16-bit eye candy.

The post-apocalyptic backdrop on the first stage absolutely sets the tone for the rest of the game even though the levels soon drift into mechanized bases, organic caves and all sorts of environments in the shoot’em up areas. It’s a complete and diverse adventure that tries to extract the best from Nintendo’s platform, oozing with transparencies, sweet animation and Mode-7 effects without a single ounce of slowdown. To enjoy all of this, however, it’s recommended to play the game on a native Japanese Super Famicom instead of an SNES, since it crashes randomly in consoles from other regions while also presenting occasional audio glitches such as the absence of music layers in the first level.

Rendering Ranger R2 has no continues at all, but by default comes with 5 lives and 5 health cells for each life, with the possibility of stocking up to three extra hits with providential shields. I guess this says a lot about how friendly the game is, right?

On the platforming areas the ranger is able to use his cannon to fire four types of weapons. Platforming inputs consist of shot, jump, weapon select and a "megaweapon", but you can also use the shoulder buttons to aim at diagonals without moving (L points up, R points down). Your only weapon at the start of the game is the vulcan spread shot (red), but you’ll eventually come across the other ones as the game progresses. All items are concealed inside small skulls or special parts of the scenery, floating up and down when released – note that if there’s no wall to bounce back they’ll go away. The other weapon types are the forward laser (blue), K-type shot (orange) and bouncing shards (green), with the remaining items consisting of an energy cell that provides health recovery or a shield if your health gauge is full. Each weapon is upgraded automatically when you collect their respective power-ups, and all surplus items are worth 5.000 points each.

Special attacks can be used with the "megaweapon" command, whose stock is shown on the lower left corner of the screen. Each weapon has its own special megaweapon: vulcan drops a series of impact bombs (very effective at close range), laser results in a powerful beam, K-shot fires a large wave arch forward and the shard shot emits an outward huge explosion. Since megaweapons are automatically (slowly) recharged after use there’s absolutely no need to refrain from using them. In fact, they’re great strategy aids during certain cramped or tricky parts.

The four main inputs are configurable at the options screen. My layout of choice was A (jump), B (shot), X (megaweapon), Y (weapon change). These commands are exactly the same during the shooting stages except for the jump input, which then assumes the task of turning the ship around so that you can shoot backwards/forwards. Shoulder buttons have no effect, but the speed of the ship can be toggled between four settings with the SELECT button. Pay attention to the ship’s exhaust flare to see in which setting you’re on.

Adding to the items of the platforming area, in the shmup parts there’s also a capsule that generates two options above and below the ship, increasing both its firepower and defensive capabilities (they absorb bullets). The action is constant and climaxes in a relentless battle in the final levels, always with amazing visuals and lots of unique bosses. Trenz obviously wasn’t trying to reinvent the wheel, opting otherwise to use inspiration from classics such as the Thunder Force series, as well as Gradius, Darius (particularly large enemies/bosses) and a few cool nods to Air Buster (the high speed tunnels), Hellfire (large turret-ridden ships) and Eliminate Down (the rocket storm). A tiny bit of an euroshmup touch is also there but it’s fairly negligible, while Turrican and Contra are the obvious references in the platforming realm. 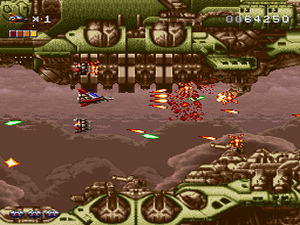 Even though the platforming sections (stages 1, 2, 5 and 9) have their charm, in my opinion the cream of the crop of Rendering Ranger R2 is in the shmup sections (stages 3, 4, 6, 7 and 8). All shooting stages lend a momentum to the game that’s just not sustained in the platforming parts. Both stage types share the same basic length, but once you’ve been through the latter the excitement kinda vanishes along with the challenge, whereas shooting stuff while moving around and dodging bullets gives you a lot more rush. After the first stage, for example, pits (the only hazard that takes away a complete life) will only reappear in the final level, which in turn feels like a weak, easy afterthought after the awesomeness of the 8th stage, action- and music-wise.

Speaking of lives, Rendering Ranger R2 suffers from the same problem of Thunder Force III: not only do you respawn right where you died, but there are also too many extra health and extra lives to help players out. Watch out for 1UPs in the form of helmets (platforming parts) and small ships (shmup parts). They certainly aren’t hidden, but tend to be located in unsuspected corners. Some other breathers that soften the difficulty even more are the full recovery of the energy bar in every new stage and the fact that upon dying you only lose the weapon you're currently shooting (in the case of the red type you're sent back to its default level).

While technically extremely competent, the game does incur in a little flicker during its platforming half, which sometimes makes you think you've been hit. Other than that, the only detrimental aspect here is that the scoring system is broken: you can amass as many points as you wish by destroying the shower of debris dropped by a hovering enemy during one of the platforming levels. There's also the abovementioned regional bug, but it stopped happening once I changed consoles. In the options players are able to map buttons, enable/disable autofire, choose a different color for the character/ship and view high scores.

I completed the game twice on Normal difficulty without the cheap milking of stage 5, and this was the result of my second try: 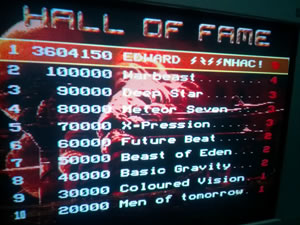