Excluding related games such as Starship Hector and GunHed, this the first official sequel to the seminal NES/MSX Star Soldier. Of course the name Super Star Soldier is as obvious as it gets, even though the game shares little with its predecessor in regards to gameplay. In fact, the differences are grand enough to put it in a league of its own, which is much more akin to the style of a Compile shooter than the dire roots of Tecmo’s forefather Star Force. Tying all this together is Hudson Soft, the developer that used almost exclusively the Soldier games to promote the then famous Caravan console tournaments in Japan.

The style merging of Compile and Hudson Soft first seen with GunHed continues in Super Star Soldier. In a nutshell, it’s a steady slope of 8/16-bit flashiness punctuated by colorful weapons, large bosses and some exquisite frantic sections. Gone are the tiled terrains, the annoying hindrances and the turret-ridden enemies of its predecessor. Since players are welcomed by a game that spreads spikes and valleys evenly throughout eight stages without stupid little secrets, the result is definitely a more fun, straightforward and pleasing experience, one that rewards those who can cleverly manage its resources. 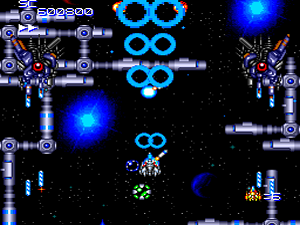 A mid-boss in stage 4

Controlling the spaceship at three different speeds is done at the press of the SELECT button. Button II shoots and button I has little influence in the gameplay, only becoming active when you pick-up the item for options – it just alternates the pod’s orientation between horizontal and vertical. Speaking of items, the main ones are the mandatory color-coded power-ups. Here we have four: yellow (flamethrower), green (lightning laser, 3-way at max power), blue (expanding rings) and red (vulcan, classic 5-way shot at max power). Upgrading is accomplished by sticking to the same item color, and once the ship is maxed out in power – after five consecutive items – the next one will work as a smart bomb, wiping out bullets and damaging all enemies on screen.

Auxiliary weapons exist in the form of option pods (O) and guided missiles (M), each with three upgrade levels each. Option pods are initially stationary and can have their alignment switched at the press of button I, but the next upgrade will make them rotate (an effect that can also be achieved with button I on the first phase if you have a turbo controller). Option pods do not add to the firepower, but inflict damage and provide protection against regular bullets. I always go for guided missiles though because I’d much rather adopt an offensive than a defensive attitude in games like these. Unlike the main shot types, secondary weapons do not result in smart bombs when taken in excess.

A 3-hit shield is acquired whenever the third power level is achieved with any weapon. It starts blue, and by the last hit it will go red. Regardless of your current firepower level, whenever you get hit the ship will revert back to a power level of 2. Being shieldless is okay if you’re in the first half of the game, but later on it’s kinda scary in a Darius-like way. The good news is that to get another shield you just need to rush to the next power-up of the same color. Beware though, Super Star Soldier is one of those games that shows no mercy when you die, often bringing about successive deaths in a row if you happen to bite the dust once. There's a very precious catch though: early on you’ll notice that some power-ups can be hit by your weapons; if you avoid shooting at them they will descend cycling through all main and secondary weapon types, but if you hit and keep them in place long enough they'll eventually acquire a blinking nature that explodes into a smart bomb when collected, as well as giving away 5.000 points and adding up to a hidden instant respawn counter. In a nutshell, blinking items are great for both scoring and survival. Just don't let them reach the bottom or you'll lose them, this is not GunHed after all (thanks for the heads-up, Greg!).

All extra lives are score-based and come at fixed intervals: 50K, 100K, 200K and then at every 300 or 400 thousand points. Autofire is implemented by default. Besides the bonus points acquired from blinking pick-ups, many enemies release destructible bullets/parts and any regular item taken is worth 800 points each. Much later in the game golden orbs also start appearing for a few more points, which is kinda odd. Why take so long to include them? The first time I got there I thought they were harmful and dodged the things until more golden orbs showed up again in the escape sequence of the 7th stage!

Super Star Soldier offers some nice variety across its eight levels. Outer space alternates with action over watery and desertic areas, as well as satellite bases and alien landscapes. Some of the music is rather good and in general the soundtrack coexists with the sound effects harmoniously. One of the coolest aspects of the game is the inclusion of a few homages to other shooters. Konami seems to have had a good influence on Hudson Soft because it's easy to spot references to Gradius II (ice blocks/snakes in stage 5) and Salamander (the escape sequence mentioned above in stage 7). Bosses and midbosses range from a rehash of the star brain from Star Soldier and some bulky creatures such as that pricky mecha from stage 4 and the giant version of your own ship in the final level. My favorite weapon is the maxed out green lightning laser of doom, but I can also vouch for the effectiveness of the 5-way classic shot in stage 6.

It's safe to say the first half of the game is fairly easy, but after that Super Star Soldier starts showing some claws. The last couple of levels certainly demand a little more from the player, and it's always advisable to get there with the maximum amount possible of extra lives. Believe me, you do not want to trigger checkpoints in the final stage. Since it's not such a long campaign, I'd say the challenge is spot on. Caravan lovers are also well served with the additional 2- and 5-minute modes.

Below is my final 1CC score in the default settings (there's a code to activate higher difficulties, but it's too complicated and I didn't bother checking it out for real). Now for the next game in the series: Final Soldier. 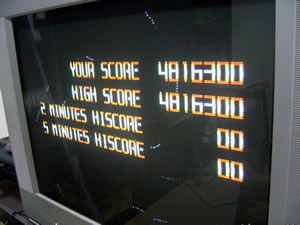