Have you ever wondered what would happen if Contra merged with Forgotten Worlds? Well... S.C.A.T. is one of the possible answers. In fact, it's as if the characters from Contra had suddenly acquired the ability to fly, and given the sci-fi backdrop we could even take this game as a spin-off evolution for Konami's platformer classic. Known as Final Mission in Japan and Action in New York in Europe and Australia, S.C.A.T. is a short for Special Cybernetic Attack Team, the last hope of mankind against the threat brought about by an alien invader called Vile Malmort.

Yes, the name also reminded me of that little literary phenomenon about a wizard kid.

Let it be known that I have played the North American release of S.C.A.T., whose differences to the other versions go a little beyond what could be called merely aesthetical. The most evident visual change from the original release titled Final Mission is that in S.C.A.T. you can assume the roles of either "Arnold"or "Sigourney" as you start the credit. The game rides high on the movie hype and even shows their likenesses in the character selection screen for a 1-player campaign (when in co-op player 1 will always be Arnold and player 2 will always be Sigourney). In game there's no difference at all between them except for sprite color (he is blue, she is orange/red). Still on the movie hype thing, note how Back to the Future is openly referenced at the title font.

The Earth is counting on you! Good luck!
(courtesy of YouTube user Video Game Previews)

Since you start playing on a devastated New York and proceed into outer space territory, the game certainly shows a neat environment progression that loosely matches the increase in difficulty. Button B is used to fire while button A locks and unlocks the firing position of the twin satellites that move above and below the character. It's not possible to lock the character firing direction as in other bidirectional shooters, so a little bit of caution must be used to take care of all incoming hazards. That's when the secondary shot provided by the twin satellites is useful, since they can hit enemies positioned in different angles.

By destroying a small gray crate an item is uncovered for immediate pick-up. Don't wait too long to collect the desired ones, for they will soon catch up with the scrolling speed and go away. Weapon types consist of L (laser), W (wide spread) and B (bomb). My favorite one is the wide shot because it combines the faster firing rate of the laser with the power of the bomb. The instruction manual says the laser can shoot through some walls but that poses no advantage when the weapon is simply so weak, whereas the concussive force provided by the explosive bombs suffer from a capped shooting rate of only one shell at a time. None of these weapons can be upgraded nor have any influence on the firepower of the satellites.

The remaining item types appear as S (speed-up) and R (health recovery). Speed-ups can be collected at will because the characters will never move too fast. Each R refills three slices of the health meter, which should never reach zero or else it's instant GAME OVER. At the start of the credit you get six health/life blocks, and besides collecting the recovery items you also get extra single refills at predefined scoring intervals, which I assume to be 10.000 points. The reason for the "assuming" part is that the score isn't shown anywhere while you're playing, only at the establishing panel prior to the start of the level. 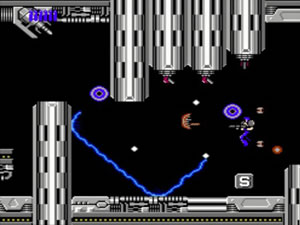 Stages in S.C.A.T. are of decent length for an 8-bit shmup, but the game feels very short nonetheless. Named the "Astrotube", stage 3 has a vertical part where you fly really fast inside an ascending shaft towards outer space; unfortunately visibility takes a little punch there because the color choices aren't the most reasonable. In stage 4 players fly around a huge battleship with lots of cheap lasers that enter the screen already shooting and give little to no response time for reaction; the tip is to remain as close to the battleship's hull as possible, after all there's no harm in touching surfaces. Beware of the scenery though, instant GAME OVER occurs if you get stuck and caught up by the scrolling effect.

In the final area the challenge picks up a notch, with blue lasers fired from invincible turrets bouncing around the screen and leaving little room for maneuvering. I had to continue a few times there to get comfortable with the level. As for bosses, they're all quite varied and at times creepy, but none of them offers any decent resistance whatsoever. Besides the fitting soundtrack, the boss gallery is the aspect that reminds me the most of Natsume's previous NES shooter Abadox. There are a few other traits that seem to bleed over between both titles, but in general S.C.A.T. comes off as more generic and doesn't feel as accomplished as Abadox. For its shallow nature at least it's reasonably fun, something that can't be said about Japanese Final Mission: that one has only three health cells, weaker weapons, severe power-down penalties and no recovery items at all. Ouch.

The opening moments of S.C.A.T. include a cool animated intro and a digitized voice message cheering players after the mission is started. That goes a long way in setting the mood for what's to come, but I wish the consumed resources had been used for more noble *shooting* purposes. My final 1CC score using Arnold is below (don't reset the console or that hi-score number will be reset as well). 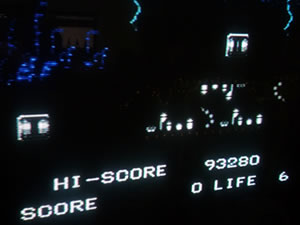