No matter how you see them or how people perceive them, some video games are just like bricks. They're "heavy", but not in any advantageous sense of the word, and playing them most often equals the idea of a painful hassle.

An insidious vertical shooter that originally came out for the Commodore Amiga, Battle Squadron is one of those games. It disguises its claws with the basic story of a rescue mission where you pilot a spacecraft sent to find two coleagues imprisoned in a hostile planet called Terrainia. Players must patrol the surface of the planet and enter/clear three subterranean areas before being allowed to face the final enemy – an unusual stage scheme that allows infinite play if you refuse to face the underground challenges. Surface opposition is mild and should offer no real threat, but once you decide to go into them holes the game throws everything but the kitchen sink at you.

This difficulty, unlike in other tough shmups of the 16-bit era, actually stems from a series of obnoxious design choices that can enrage even the most patient gamer, unless we consider playing in co-op. However, my instance is that no shmup should be designed around cooperative play unless there's some sort of dynamic balance in place. Unfortunately this isn't the case of Battle Squadron.

In order to complete the mission the player is allowed to shoot (buttons A or C) and trigger "nova" bombs (button B). By destroying a specific carrier a power-up is released, cycling colors for immediate pick-up. The default type is yellow (orange magma wave, starts with a straight shot and acquires a side attack when maxed out), but there's also red (spread shot), green (laser, acquires a little spread when maxed out) and blue (two-way forwards/backwards shot). Five power-ups are needed to maximize firepower, and a little interesting deviation from the norm here is that you keep upgrading your shot even if you decide to pick a power-up of different color.

Since you must count with only three lives and no extends of any kind, remaining at full power and getting all the extra bombs you can is essential. Whenever you see a squadron of four ships arriving and retreating in line kill them fast to release the item for an extra bomb. Dying comes with the penalty of a downgrade of two power levels, and if this happens in the underground areas all I can say is good luck in getting two power-ups quickly to get back on your knees (after all you do feel underpowered even at max power). Battle Squadron can certainly seem tame upon a quick glance at the first minutes, but you can only know what's really at stake once you decide to venture into the underground by touching the ENTER HERE message in the middle of the black holes.

Considering that full power is so important to have a chance at the inside stages, shunning the first entrance gates in order to upgrade weapons at the surface level is a good idea. To that I also add the fact that the third underground stage is the hardest one, so facing it before the other two is always better than doing the opposite (if you survive the odds of that level you'll know the worst is already behind you). While flying on surface level, whenever you pass by the third underground entrance the terrain "loops"; once you clear any of the subterranean areas and fly past its entrance again the ENTER HERE message won't be there anymore; and as soon as all three underground lairs have been destroyed the game rewards the player with the fight against the final boss at the end of the surface stretch.

Though reminiscent of the euroshmup school of thought, Battle Squadron is more akin to a lighter Raiden than the horrors of Xenon 2 Megablast. All bullets are aimed, therefore sweeping and herding are essential techniques to be used here. Slowdown is totally absent and collision detection is decent for a game with such a large/slow ship, but as I mentioned above a few obnoxious aspects make the experience a lot harder than it should be. The worst of them are the chunks of foreground scenery that completely block the action, forcing you to always remain in the visibility zone and to anticipate enemy/bullet trajectory whenever you need to briefly fly below these layers. There are also cloaked ships that follow you around and often take you off guard because you just didn't see them coming. Lastly, enemies have the nasty habit of firing when they have already left the screen. 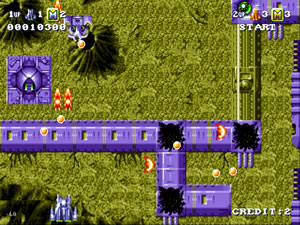 A representation of 80s European sci-fi in shmups

Taken as it is, with all its unnecessary contrivances, at least Battle Squadron remains faithful to the rules it creates. Since it lacks autofire, a decent turbo controller is absolutely needed to play the game (I'd love to know what no-autofire purists have to say about this one). Even though the enemy gallery isn't diverse, each stage has one or two stronger foes that represent the bulk of the challenge and require serious crowd control if you want to stand a chance at winning. Honestly, there are parts where the game displays a bullet-hellish atmosphere rarely seen in the 16-bit era, which kinda turns it into an embrionary version of Milestone's Chaos Field. The difference here is that avoiding chaos is not an option.

Seeing that the surface stretch is endless and you can be there forever, there's no point in talking about scoring in Battle Squadron. Never mind those little X items you collect from destroyed ground targets and are worth 1.000 points each whenever you transition from one section to the next. Also never mind the short-looped theme that plays from start to finish, nor the fact that the game denies you from seeing your score if you pause or as soon as you lose your last life. The difficulty setting here is quite special because it works according to two selectors: maximum number of on-screen bullets and bullet speed. In total there are 15 possible combinations. Particularly amusing is adjusting bullet speed to minimum and bullet number to maximum.

The default settings are max enemy bullets at 16 and bullet speed at 150, and that was how I beat the game. The credit ended at the first underground area of the second loop – the picture below was taken from a recording paused a few frames after my ship was destroyed. Battle Squadron loops with no apparent increase in difficulty, but given the amount of threats at every corner continued play eventually wears you down. My favorite weapon for the whole game was the red one, for its coverage and brute power at point-blank distance (green is even more powerful but lacks coverage in the busiest parts of the mayhem). 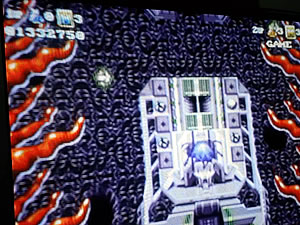