One of the things people mostly remember about the Playstation is the large number of 3D polygon-based games delivered by the platform. Regardless of how well they aged it's hard to deny their importance in the history of our hobby, after all 3D opened up a whole new world embraced by many and shunned by just a few oldschoolers who remained faithful to 2D sprites. There were, however, titles that tried to mix 2D sprites with 3D polygons even though they still offered pure 2D gameplay. Airgrave belongs to the most basic batch of this short-lived wave, as does Stahlfeder, Santos's other entry in the Playstation shmup library.

Airgrave's core gameplay is reminiscent of Xevious, RayForce and Soukyugurentai, with a little Sonic Wings thrown in. Unfortunately the chances of a bad first impression of this game are still relatively high. Even with a selection of different playable ships it ends up lacking the necessary character to impress, which is only worsened by the confusing control scheme and the consequential learning gap about the scoring system. Trying to compensate for that with overlong, boring dialogue intermissions might work with some people but not with me, and spoken Japanese certainly isn't to blame for that. By the way, the game never saw any release outside of its native country Japan and that says a lot about its obscurity.

I'm not in the least bothered by the blending of 2D and 3D in my video games, as long as the result feels natural and does not interfere in the gameplay. Since Airgrave belongs to the Playstation golden era, when the hype was all about 3D objects and textures, these elements needed to stick out somehow. It's only natural that bosses were the chosen ones to carry this trendy flag, but having unskippable black screen entry animations for them wasn't a wise idea at all. 3D backgrounds, on the other hand, are more subtly used. If only the developer was a little bolder the game could've shown a little more flair, as in the end of stage 3... when the graphics are starting to get interesting with nicely rendered skyscrapers the level is abruptly cut off in favor of the unskippable boss introduction. 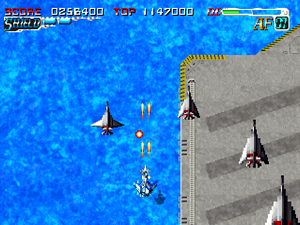 Pilot Aine takes on the Sea Side Base

By default, button × is mapped to shoot and button ○ to activate the "overdrive" attack. Besides firing the ship's main gun, the shot input also hits the ground at a pretermined distance just like in the classic gameplay from Xevious. Playing the game like this is possible, but for a complete Airgrave experience players must enter the Options screen and activate another input for "ground/aiming": when pressed and released, this button creates a lock-on net and hits multiple targets inside it. While fine on paper, the execution of the ground/aiming resource is rather finicky due to the delay for the crosshair to actually lock onto something (especially during fast scrolling sections). The good news is that there's a grace period after the last aimed enemy is destroyed, which allows you to move on to the next target in order to keep the lock-on chain going. Since scoring is directly affected by the number of enemies killed in a single net activation, getting used to this weird aiming mechanic is absolutely mandatory for score chasers.

Another peculiarity of the ground/aiming feature is that it diverts energy from the rest of the ship's arsenal, disabling the Xevious-like ground bombs and reducing the rate of fire of the main gun whenever it's activated. That kinda makes sense, unlike the ability to switch the default shot input to "to air" in the options menu. The purpose of this is to allow the use of the main shot only, doing away with the ground bombs. Since there are sections where this type of attack is still useful and it's impossible to have "to air" and "shot" mapped in the same controller configuration (it's one or the other), all I can say is that this reeks of a leftover mess by the programming staff.

Anyway, as for the rest of the basic gameplay, items released by destroying slow-moving shuttles include shot power-up (red), ground chain-up (yellow) and shield energy recovery (blue). Four red items maximize firepower, the amount of possible ground lock-ons is shown in the AF tag and the maximum amount of energy at any given moment is six. Shield depletion means GAME OVER, so don't miss blue items and do your best to keep that meter healthy (note that players recover one health point at the start of every level). These items can also be exploited for survival because there's a short moment of invincibility that comes with the moment they're picked up.

Shooting and targeting ground enemies is the backbone of Airgrave, but sometimes it's just not enough. That's when the overdrive attack becomes useful: it boosts the ship's arsenal to a great degree by endowing it with a more powerful shot pattern and by automatically seeking ground targets if you keep the aiming button pressed. Filling up the overdrive gauge on the top of the HUD is accomplished with ground kills, and a full gauge allows up to two consecutive overdrive blasts. An "overdrive ready" message warns the player whenever the attack becomes available for use.

This is the real thing!
(courtesy of YouTube user Arcade Database)

There are four ships/pilots to choose from, all of them with very specific strengths and weaknesses. Aine carries the most average stats but his shot lacks coverage; Randy is the slowest one but has the best spread with a wide aiming area; Reny is the fastest, has the most powerful overdrive attack but is shafted with a tiny and useless aiming area; Vel has a poor reach on the main shot but a very powerful ground attack. In my opinion Randy is by and large the best character as long as you're able to cope with his slow speed. He's the one leading the gang in the game cover, but all characters have dedicated dialogue lines. Storywise it all starts at a forest base, with the final objective of invading a sky fortress to defeat an evil mecha after tackling several different landscapes in between. Bullet density isn't taxing, but a few sections might cause massive slowdown (5th boss).

All things considered, if you're able to see past the game's generic setting the best aspect about Airgrave is definitely its scoring system. End-of-stage bonuses are granted based on level completion, the number of kills for a specific ground enemy (a bonus that doubles if you manage to destroy them all for a PERFECT) and a negative deduction of -2.000 points for every hit you take. Long chains with the aiming feature are still the biggest addition to the score, but some items collected in excess are also worth something (1.000 points for power-ups, 2.000 points for health recover), with ground enemies releasing special bonus medals (bronze = 1.000 points, silver = 2.000 points, gold = 3.000 points).

If asked about which Santos shmup is the best – or least disappointing – I'd probably side with Airgrave on the merits of its scoring system and an actual ounce of challenge. The only edge I'll give Stahlfeder is the soundtrack, even though Airgrave's music isn't offending by any means.

An unusual resource in the options screen for Airgrave allows players to change the color of the enemy bullets if desired (I didn't have any visibility issues whatsoever). Much more useful is the ability to set mission demo to OFF in order to get rid of all those intermission panels/dialogues (unskippable parts still remain though). My best 1CC high score was achieved with pilot Randy on the default difficulty setting (3). 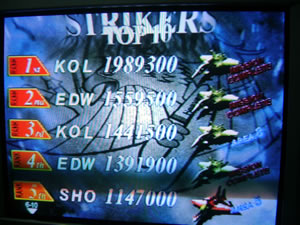