In a library that spans dozens of shooting games it's quite common to overlook Final Blaster, either for its mundane phrasal proximity with the Star Soldier series (there is a Final Soldier after all, and I've confused them more times than I like to remember ~ even when writing this blog post) or for the subdued aspect of the package when compared with more recognizable offerings by Namco (such as Galaga '88, Dragon Spirit and Xevious, for example). Whatever the reasons, the truth is that Final Blaster tends to be unfairly left aside by everybody. That in itself is a very sad fate for a game that's certainly above average among it's 16-bit or PC Engine peers.

Much more interesting is the obscure tie-in of Final Blaster to other Namco titles such as Bosconian. The most prominent link between these two is the 7th and last level of the game, which takes place in planet Bosconian itself. This connection kinda justifies the arcade-like structure of Final Blaster, but it also hints at a deeper meaning within the works of developer Namco. Upon a quick reasearch I found out they're part of an integrated universe called United Galaxy Space Force (UGSF), which spans several years and includes titles of all genres. It's a very nice concept for those who enjoy tracking down the stories behind the games they play.

Final Blaster puts the player in the seat of the Blaster mk-II Phoenix, a powerful spaceship sent out to stop another invasion from Bosconian baddies. Armed with a nice weapon selection, it departs from the Moon and cruises all sorts of environments until the face-off against the mother alien. Fire away with button II or hold it to charge the "phoenix" attack, which upon release emits a powerful blast shaped after the mythic bird. This blast pierces through walls and is your only ally against some of the bosses (notably the 3th and the 7th). The only gripe is that you need to get used to the relatively long charging cycle, as well as switching that turbo function on and off when needed since there's no autofire at all in the game. 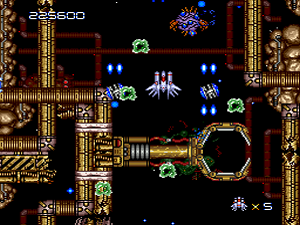 Just a couple more kills to finally face the boss

In order to increase the efficiency of the regular shot you must destroy the carriers and collect power-ups that cycle between two colors only. There's a catch though, since reds and blues don't exactly work according to regular conventions: red is responsible for the ship's power, whereas blue endows it with options whose behavior depend on the amount of red power-ups you have already collected. It works as a single 3×3 matrix where a few seemingly less powerful combinations end up being better than the most powerful ones. The awesome configuration for trailing laser options, for instance, is achieved with 2 reds and 3 blues, while the double directional options with missiles is activated with 3 reds and 2 blues. Max power (3/3) corresponds to the rotating laser options, which although powerful lacks the coverage you can get with the previously mentioned configurations.

And then comes the purpose of button I. When pressed, it sacrifices one blue power level for a bomb flash that kills everything on screen, so to get the ship back to its previous status you need to get another blue power-up. Survival mechanics aside, I just wish I could do the same with the red power to get the configurations available for 2 reds, but it's not possible. The final input at the player's disposal is the SELECT button, which switches the flying speed up and down through four settings visually indicated by the number of spiky edges of the ship itself. I mostly used speed 3, changing to 2 and 4 only once each (2 during the hydraulic clutch passage of the 5th stage and 4 against the final boss).

Once you finish a stage in Final Blaster the game measures your firepower and performance in order to determine the difficulty level of the next area (OPT for blues, POW for reds and MISS for deaths). This rudimentary rank system is very subtle, and is mostly noticed in the enemy resilience after you die in a condition of max rank (level 4). In any case, things will just be very difficult during the second half of the game no matter how powered up you are or how many times you have died. And dying can be extremely cruel: the green icon left behind gives back all the power you had if you're able to pick it up. It's easily recoverable if you die close to the top, but will be irrevocably lost if you bite the dust close to the bottom. And then it's back to the default power level, despair knocking at your door as the enemies relentlessly proceed with their attacks. Factor in the vertical span of the play area, which is a good degree wider than usual, and you'll also have to deal with enemies you can't see firing bullets after they've already left the screen.

With great variety in stage design and bosses, all levels in Final Blaster feel quite unique. The very first impression might be of another Star Soldier lookalike but soon you notice the game actually bears a striking resemblance to Irem's Image Fight, as hinted by the ship's directional firing patterns, the floating islands of stage 3 or the shaft full of platforms and walkers of stage 4. Irem is also a very strong influence in other parts of the game, such as the final stretch prior to the last boss. Throwbacks to Xevious and Dragon Spirit can also be spotted, yet Final Blaster manages to leave a mark of its own with very specific sets of hazards and traps amidst cramped, claustrophobic areas that require careful maneuvering. The music is also of very good quality and plays in perfect balance with the sound effects.

Good performances in Final Blaster are duly and fairly reflected by the tight scoring system. A nice bonus is achieved if you complete a level without losing any lives, with the final stage obviously granting the highest prize of all. Items in excess are worth 500 points each, and mild milking is possible in certain areas. Watch out for that Galaga-like insect that cruises the screen in erratic patterns: if you don't kill it the thing will return in a larger and stronger form that descends slowly from the top while tracking the player's position. Not only is this huge insect a pain in the ass, but if you fail to kill it again you'll be robbed of one level of blue power, a downgrade that can be disastrous at times (the big slow bug is also worth less points than the zapping little bug). Extra lives are score-based and come with 50.000, 100.000 and then for every 100.000 points afterwards, with a few continues making it possible to practice once the credit is over.

After all the hard work one has to put into beating the game, the ending sequence does feel like a worthy reward for us brave pilots. It's got a very emotional tone, giving closure to the simple opening panels and putting an end to the experience on a high note. Of course this high gets even better with a higher score (if you miss your final number just wait for the attract mode to run to see it again). My best result is below, having died twice and being denied the bonuses of stages 5 and 6. 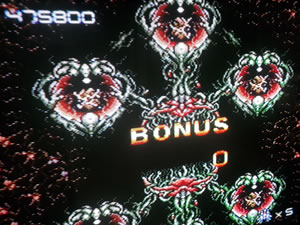