One could say influences go a long way in defining your body of work, most importantly in projects of such creative nature as video games. You can't really reinvent the wheel, but it's always possible to try and adorn it with all sorts of different things. Neo XYX (or Neo Zaikusu in Japanese spelling) is very much an example of that, a love letter to the visual style of developer Toaplan, to the bullet curtains made popular by Cave and to the scoring systems devised by Raizing. Originally "cooked" in the MVS format, soon the game received ports of version 1.3 on the Dreamcast and the Neo Geo AES, which was my platform of choice for a first contact (I'll leave the Dreamcast version for a future opportunity since it's supposedly riddled with bugs).

Neo XYX has the honor of being the first TATE shooter released for the Neo Geo. Though quite an achievement in itself, this feature must be seen with caution by players who can't rotate their TV. Since the Neo Geo is a platform with natural 4:3 aspect ratio, it's not possible to play the game in true YOKO. What you get on a horizontally-aligned TV is rotated controls, a rotated HUD and some rotated items, which for a vertical shooter doesn't make sense at all (just as an example, a similar screen setting exists in Donpachi for the Sega Saturn). The practical result is that this version of Neo XYX is only viable for people who can turn their TVs on the side for that warm fuzzy feeling of emulating a vertical arcade cabinet in the comfort of their gaming/living rooms.

An initial itch also bugged me as soon as I switched on the catridge for the first time. The game starts running in that faux-horizontal mode with no options at all to switch it to TATE. Not even the instruction manual has useful information on this! I had to do some online research to discover that in order to boot it in TATE you must press A when turning on the console. If the game is already running in hori mode you need to start a credit, pause and hold A + SELECT until you hear a sound cue.

Would you say that's a silly oversight or just a sign of a rushed porting job? I'll stick to the latter. 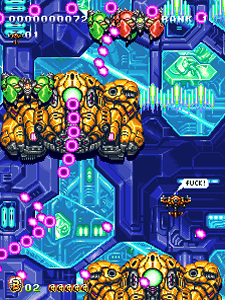 Wait, did I just lose something back there?

Following an intro with several full screen panels showing what seems to be the destruction of a planet/moon by an alien space fleet and a female pilot departing for battle, Neo XYX presents a quick skippable tutorial and then throws the player directly into the action. Button A fires, button B triggers a bomb and button C reduces ship speed while narrowing and slightly increasing firepower if A is pressed. This control scheme is a little weird up front, but it's not that bad after a while; in fact it's very similar to the one used in most Cave games if you never let go of the A button.

An interesting aspect of the gameplay in Neo XYX is the complete absence of power-ups, but that doesn't mean you won't be picking up items along the way. Player focus gets totally shifted towards multiplier medals, gold tokens and bomb refills, a design decision that strongly emphasizes playing for score instead of survival. Medals appear at regular intervals from small destroyed enemies (big ones do not release medals) and increase in value from I to XIX (1 to 19) only if no other medal is on screen at the time (if there's an uncollected medal the next one will be spawned with the same value). Those gold tokens increase in size and a huge score boost is expected if you reach the XIX value and manage to not let any further XIX medal fall off the screen. On the other hand, a single lost medal sends its value back to I as the ship displays a fUCK! speech balloon (!).

The last item pick-up is the bomb, which might appear in two sizes. The big one adds an extra bomb to the bomb stock, the smaller ones fill up a bomb buffer and yield a full extra bomb once seven of them are collected. The bomb has a tiger-like aspect that sweeps upwards and does a little bit more than serving as homage to Toaplan, damaging enemies and shielding the player: it pushes all medals up, which is extremely useful to recover medals that would otherwise be lost because you couldn't reach them. Bomb items have to be flown over to be effectively picked up, but medals and gold are automatically sucked into the ship if you get close enough to them. Score chasers shouldn't take too long to collect the gold tokens though, they all disappear after a brief while.

For a company with such a long history of dedication to both the genre and the Neo Geo, NG:Dev.Team certainly had their share of previous expertise when developing Neo XYX. That's why this game is remarkably fun despite a few minor setbacks. Take the abnormally high difficulty level of the first stage, for example. It's not in the same league of Last Hope (at least while you're not trying to boost medal value from the get-go), but the overall sense of rush requires a mindset that's considerably different from pretty much every other shmup out there. In fact, the feeling you get is that Neo XYX is desperately trying to get somewhere with its accelerated pace, sheer lack of dynamic pauses and absolutely no slowdown. Strangely enough, enemies don't always seem so eager to put you down because once they get past you they won't shoot anymore – a device that helps survival and can certainly be exploited for an easier clear at the expense of a lesser score.

In pure Seibu Kaihatsu style, the first half of the credit takes place on Earth and the second half in outer space, and players who decide to face the enemy will be subject to a remarkable variety of bullet shapes and patterns. Macrododging works better against a handful of enemy spreads fired by bulkier foes, such as the occasional midboss. Boss fights, on the other hand, are the main reason why Neo XYX might be seen by some as a bullet hell shooter. The art style for the large creatures is one of the game's visual standouts, which boasts a very colorful enemy gallery designed by indie artist Perry "Gryzor" Sessions, the man behind the embrionary concept of the game. The soundtrack composed by in-house frequent collaborator Rafael Dyll is often energetic and escorts the action with nice results.

A minor bug appears in the random failure of bomb fragment carryover from one stage to the next, an event that's quite aggravating when you're short of just a single item to get the extra bomb (there were even occurrences of being denied a full bomb within the level itself after collecting all fragments, this happens at least once in the video above). Speaking of item collection, special caution must be taken whenever enemies are killed at the very bottom of the screen since there's always the risk of losing a medal there. Keeping a maxed out medal chain is even immune to deaths, which have minimum effect on the ongoing score and are only detrimental in the case of a 1CC (each remaining life in stock is worth 1,5 million points). And with the extend interval set at 10 million, it's easy to see why scoring is also very important to go all the way into the game. There is a true last boss that will only appear if you're able to get to the end without continuing.

When starting the credit you're prompted to choose between "Training" and "Normal" and that's it, no options or adjustments are available at all. This Training mode adds side pods to the regular ship and makes it stronger while the game itself throws less enemies at the player. Since it's actually an easier full game we're all left to wonder why it was named as "training". I guess most people will agree that a stage select feature would've been much more useful.

The picture record of my best 1CC result on Normal mode is below. Soon I'll try the Dreamcast port to see how it stands when compared to this version. 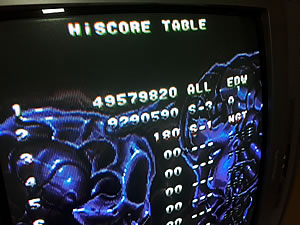