Whenever people think of shooters designed by Success, Cotton is immediately what comes to mind especially for oldschoolers such as myself. Unless you were aware of the developing trend that started to dominate the STG scene at the turn of the century, chances are you'll have missed their foray into bullet hell territory, a game stylishly called Psyvariar – or Psyvariar Medium Unit for completeness sake. It came out for the Playstation 2 in two versions: a stand-alone disc in the Superlite 2000 budget series (Japan-only) and in Psyvariar Complete Edition (Japan and Europe), a bundle that also includes its pseudo-sequel Psyvariar Revision. Much later both games would also appear in Psyvariar Delta for the Playstation 4.

Psyvariar is quite a unique experience in that it belongs to the branch of danmaku with strong emphasis on bullet grazing (another famous representative is the Shikigami No Shiro series). On top of that it's one of those shmups that needs to be experienced live because seeing footage of it is more often than not confusing instead of explanatory. In fact, the game is so geared towards the grazing mechanic that it falls in the same category of Radiant Silvergun with regards to survival: the more you ignore the scoring side of it the less likely you'll be able to make it to the end thanks to a weak ship and increasingly stronger bosses.

While a mixed bag in graphical merits, Psyvariar’s overall presentation is definitely a pleaser thanks to the slick, polished interface. The sci-fi motif rules the design and restricts the enemy gallery to the flying kind only. Background textures are minimalistic (not to say occasionally poor) and some even get reused in multiple stages. All the flair seems to have been applied to the foreground action, which is always full of bullets and provide great contrast for perfect visibility. It couldn’t be any different in a game where players must seek danger at all times if they want to succeed. 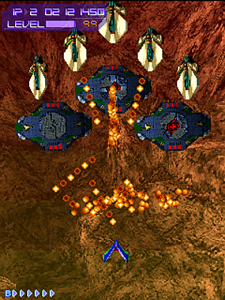 Axion against the universe

Even though you can play Psyvariar with only two buttons (shot and bomb), this port adds a third one for "rolling". Whenever the ship's hitbox passes closely by a bullet or an enemy a "buzz" is registered, which adds to the buzz counter and also to an experience gauge that measures the ship's current level (destroying enemies also contributes with some exp). Ascending to a higher level comes with a robotized LEVEL UP sound and approximately 2 seconds of invincibility, during which you can buzz more bullets and even collide against them for another subsequent LEVEL UP. Taking advantage of this brief invincibility window is the secret to level up faster, which brings the benefits of scoring higher (more scratched bullets), powering up faster (upgrades come at specific levels) and opening up new stage branches as you advance through the game (some will only be available if you reach a certain minimum level).

The rolling effect can be obtained by rapidly moving the joystick in opposite directions (just like in XII Stag / XII Zeal). When rolling, ship speed is reduced, firepower is focused into a more powerful stream and buzz count increases faster. Rolling is such an important part of the gameplay that it soon becomes second nature to shooting, and is of course much better done with a separate button than by wiggling the joystick. At key points when leveling up a bigger explosion occurs, the ship's sprites change with the boost in firepower and you also gain an extra bomb. Bomb stock is independent from life count, which means you'll always have your hard-earned bombs reserved for immediate use even in your last remaining life (max bomb reserve is 6). Speaking of which, there are no extends and no items of any kind in Psyvariar. There's no power degrade when dying, but the buzz count is reset and you can't buzz immediately upon respawn. A nice bonus is reserved at the end of the level based on destruction ratio and max buzz count.

Since buzzing/grazing is so important, letting enemies live long enough is mandatory. Sure you can dispatch them afterwards for points, but if you need to choose it will often be more advantageous to let the enemies do their thing and flee. Bullets are the heart and the soul of Psyvariar after all: slow, fast, fixed, aimed or beautifully arranged in the most varied patterns, weaving through them and leveling up becomes a real thrill after a while. The first stage on Earth's orbit – the only one without a boss – is perfect to practice and get the hang of the gameplay. Soon enough you'll be using the exp gauge as a dial for leveling up, knowing in advance if a few more buzzes are needed or if you can dive head-on into the closer bullet cloud for the next stint of invincibility. Watch closely, the fading circle around the ship works as a quick indicator for its duration.

See that thick mass of bullets coming? Dense bullet clouds are ideal for players to abuse the invincibility that comes with leveling up. Why not level up once and then ride the invulnerability wave in glorius Psyvariar fashion? LE-LE-LE-LE-LEVEL UP! That's what real rush sounds like in this game. The only occasion where you can't reap bullet clouds for more level-ups is during boss fights. The exp gauge increases much more slowly when fighting bosses, you can generally get no more than two level-ups by properly milking them before they time out and self-destruct. Don't let that happen or you'll lose a good chunk of the stage score.

Psyvariar is a considerably short game, averaging in more or less 15 minutes depending on the chosen route and the amount of boss milking. When trying out the different stage variations that become available as the game progresses, players naturally end up choosing either the ones that are easier or the more profitable for scoring. The game labels them as Easy, Normal or Hard, but that isn't necessarily an indication of best route based on your strategy. Stage 2-B (Forest /Normal), for instance, is a better choice than stage 2-C (Valley /Hard) if you want to level up faster. In the second half of the game the ship leaves the Earth-related environments and darts into the cosmos, with the final levels being named as elementary particles in physics such as Photon, Graviton, Weak Boson and Gluon (final stage 6-B, unlocked if you reach level 52). The ship itself is titled Axion and its 5th/final form is only attained when you get to level 88.

One of the defining aspects of Psyvariar Medium Unit is that each bullet can be buzzed only once, as opposed to the possibility of multiple grazing implemented in Psyvariar Revision. Ignoring the buzz gimmick and playing Psyvariar like a standard shooter is fine of course. But then you lose out on the different stages and the often great music that plays with them, on top of becoming progressively underpowered.

The stand-alone port for the Playstation 2 is excellent. After the introduction rolls and you press START the game and the options are toggled by pressing SELECT (a great soft reset function is implemented for whenever restartitis kicks in with SELECT + START). Besides the regular tweaks (configurable inputs, vibration, autosave and TATE) you can also enable a Replay mode in which it's possible to choose and watch the best performances in each level, playing them afterwards for some practice (the best performances are always saved in the memory card). All that weird "rotate" function does is rearrange the directionals to turn the game into a horizontal shooter. Finally, as far as I could check the game's rendition in the Psyvariar Complete Edition disc is exactly the same.

At the end of every credit a screen like the one below is displayed as you input your initials, showing details on every level played during the run. This was my best performance on the Normal difficulty, playing in TATE (it looks fantastic). Let's see if I can improve it when I revisit the game in Psyvariar Delta. For now my next step in the series will be Psyvariar Revision. 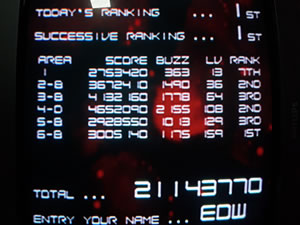