It had been a long time since I broke a video game controller. Actually, I think I never broke one, they just got to the point of having a bad D-pad or buttons with bad contact, what forced me to get new ones. But I did break one a few days ago, and it was on the PS2, at the very moment when I reached for the first time the last stage of a game I was trying to 1CC. Talk about bad timing, huh?

Now how come this guy destroys the left analog stick while playing a shmup???? That, dear readers, is a collateral effect of Triangle Service's humble XII Stag, a vertical shooter that forces you to use the so-called Side Attack in order to reach for higher scores. It consists of moving your ship fast from one side to the other (lefts and rights), which produces a whipping effect and damages enemies (two fast dashes generate a stronger Side Attack). That's where the scoring system kicks in: when an enemy is destroyed by a Side Attack, a ×2 multiplier will come in effect and soon vanish. However, if you keep killing enemies fast enough with the Side Attack, the multiplier will go up until the maximum of ×12, paving the way for much better scores. 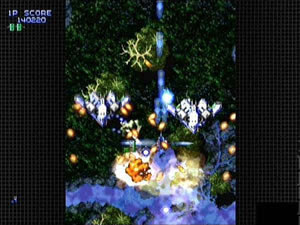 For those not willing to risk the integrity of their analog sticks, there's also the option to turn on the Rapid Side Attack (RSA), with the effect of mapping the Side Attack to a button and releasing the player from the consequences of side attacking manually, thus making the whole game a lot easier to play. Purists like myself, however, will go for full defaults, and that means RSA off - and the possibility of damaging the controller in the long run, as I did. In order to keep on playing, I opened it and inverted the analog sticks, practically getting myself a new controller since the right analog stick is useless for shmups!

Graphically, XII Stag is competent - everything is very smoothly animated. The music is standard fare - not outstanding, not bad but not memorable at all. Stage design is very bland in the beginning (stages 1 and 2 look almost exactly the same), but then the game decides to change: a ground stage follows, then a giant flying aircraft, marshes, another ground base, a meteor-filled burst into outer space and a final confrontation with the last boss. The scrolling alternates a lot between slow and fast, in a variation that's quite welcome and helps to shift XII Stag from the level of mediocre. You can power up only four times with the blue orbs, and further orbs are worth 1.000 points each. Regarding the scoring system, the game also encourages you to bomb because every bullet caught within the bomb's radius will melt and deliver 1.000 points. You also remain invincible if you stay inside this radius, so it's mandatory to know when and where to bomb if one wants to go for higher scores. A somewhat useless feature are the checkpoints for in-stage scores, which are displayed graphically at the end of every stage and tell you how well you did against the current partial high scores. There's no granting of extra lives, so the whole game must be completed with just 3 ships.

Now for the secrets: XII Stag seems to have lots of them, which are triggered according to your performance. Here are some that I found:

It would seem from all I've written so far that this game is actually awesome, which is sadly not the case. It's average and enjoyable at best. XII Stag is easily overshadowed by any other shmup from the same era, mainly because it's not strikingly attractive at first sight and also due to the fact that it takes more repeated plays and patience than usual for you to get sucked into the gameplay. Moments of frustration can happen due to the unpredictable nature of the AI, but the game does get fun after a while. Things seem to have improved on Triangle Service's Trizeal, the "spiritual sequel" to XII Stag, but that's to be analyzed in a future post. Hopefully. :)

Here's my final high score on NORMAL, RSA OFF: 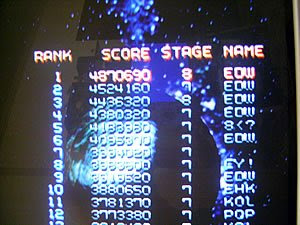