As much as I prefer the likes of Street Fighter and Capcom brawlers in general, I must concede that The King of Fighters also has an enormous appeal within the fighting game community. I had my share of Fatal Fury back in the 16-bit days, but my actual experience with KOF was null until I knew about King of Fighters - Sky Stage (occasional rounds at friendly gatherings don’t count). Having those flashy, cocky characters flying in glorious shoot’em up fashion was right up my alley, if you know what I mean.

Born in the arcades, Sky Stage soon appeared worldwide for the Xbox Live Arcade service. Even though it was met with lukewarm feelings by pretty much everybody, I kept a soft spot for it ever since for a couple of reasons. One of them was its likeness to the Shikigami No Shiro series. The other was the absolutely awesome action-driven soundtrack. I also found the game quite challenging from a few test runs, an aspect that was surely put to the test in my gaming room recently.

The reason why we have KOF characters flying in this game is this: in order to rescue fighters trapped in Orochi's dimensional prison, Chizuru Kagura endowed a group of heroes with the ability to fly through the skies, using their skills to shoot down various demons and wraiths. Fans of the series who're keen on trying this different approach will certainly recognize common attacks and variations, as well as witness characters in new clothing as bosses or in special cameos along the way. The only "problem" is that KOF Sky Stage is a very hard bullet hell shooter, one that demands fierce dedication and more often than not tends to drive away casual players. For a lighter take on the game you can check the watered down secondary port that was included as an extra mode in the PSP title Neo Geo Heroes - Ultimate Shooting. 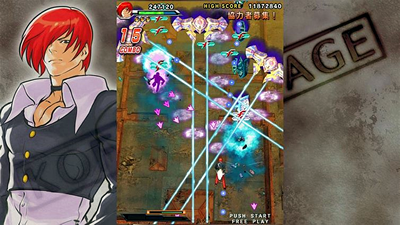 Taking to the skies with any of the six available fighters is accomplished with the following buttons, all configurable: shot, bomb, special move and provocation. The first two are self-explanatory. Special moves can be done in three different manners: tap and you get the basic level 1 attack, or hold and release the button according to the power gauge in order to trigger two more powerful attacks (levels 2 and 3). Every time a special move is used a portion of the power gauge is consumed, then automatically refilled for another use. You can't shoot when using it, and as expected the more powerful the special move the longer the power bar takes to recharge (note that some special moves also have a secondary gauge that measures the duration of the attack). As for the provocation input, it covers the screen with a red hue and puts all enemies in overdrive mode, considerably increasing the difficulty for some time while affecting the scoring system (keep reading).

As a rule of thumb, all characters have some sort of defensive special move, but the girls certainly weren't given the best options on these. Kula Diamond, Athena Asamiya and Mai Shiranui all need to deploy level 2 or level 3 moves to obtain some sort of defensive edge, whereas Iori Yagami, Kyo Kusanagi and Terry Bogard can all nullify bullets with a single level 1 move. Kyo does carry the best defense due to his fireball, an attack that's also excellent for scoring since it's able to obliterate lots of bullets and cannon fodder in a single blow. On the other hand, his bomb has the shortest reach of all and will do no damage if you stand too far from your target. I'm quite fond of Athena's level 2/3 moves (deflecting mirrors, invincibility) as well as Mai's level 2 ricocheting attack, it's just too bad their shot patterns tend to be confusing and lack power. Kula has a great spread shot and cool special moves though, unlike Iori's weak shard pattern and lackluster specials.

Using all these moves to survive the mayhem is nice and fun, but the game takes on a whole new level when played for score. The first component of this is the hit combo: kill enemies within a certain time between each other (~3s) and watch the combo meter rise; if you lose the chain this number is reset; every time you get 100 hits an extra bonus is granted. The second component is the proximity bonus: every enemy releases one or more medals for pick-up, and the closer you are when you destroy them the higher their values will be; gold medals are worth 1.000 points, silver medals are worth 500 points and bronze medals are worth 200 points each.

Getting hit within the level itself resets both the medal counters and the combo meter. Everything from then on (or since the stage start) will be on hold for the end-of-stage bonus. If you succeed in killing the boss without getting hit you'll get the number of gold medals × 2.000, silver medals × 1.000, bronze medals × 500 and max combo × 2.000. If the boss hits you the only bonus you'll reap is max combo × 2.000. This obviously stresses the importance of flawless survival play for your scoring results. The worst that can happen is getting shot right before the boss, a situation that will grant you virtually no bonus at all. A hit at the very start of the level, on the other hand, does not affect scoring that much.

Now for the practical use of the provocation/taunt button: when active, all medals that would regularly be of the bronze kind will appear as silver medals instead. The potential scoring boost is obvious, of course, but be my guest in dealing with the crazy difficulty spike!

By striking a nice balance in the risk × reward ratio, Sky Stage manages to remain attractive to both survivalists and score chasers. The game does start in a moderate tone, but as soon as the second stage kicks in the action gets much more hectic. Going the distance will require lots of practice, and even though the game allows stage select I seriously wish there were other training alternatives, such as a specific practice mode for bosses. After all, in stages 2, 3 and 4 you might face one out of two enemies (boss A or B). Fortunately there is a way to choose which boss you'll face in these levels: in the stage prior, as soon as you defeat the boss park your character on the side of the screen that aligns with the next boss choice (for example, after you beat Athena move left to fight Kyo or move right to fight Iori as the 2nd stage boss). Important: if you don't want to be challenged by Kula Diamond after you beat Orochi Shermie / Rugal Bernstein, do not use special moves when killing off the first three bosses.

Learning how to deal with different boss variations is just one of the things that make KOF Sky Stage quite a significant challenge. Besides that, players also need to cope with an absolute lack of slowdown, no extends / energy recovery of any kind and a bomb stock of only three for the whole credit. The only refreshments you'll get are score-based extra bombs, the first coming with 2 million points and further ones at every 4 million afterwards. The game is always at a default nominal rank, which only decreases a little on boss fights if you get to them after getting hit. Speaking of bosses, a good advice is to abuse point blanking whenever they stay idle. Depending on the chosen character you might inflict lots of damage, thus abbreviating the battle, avoiding some of their nastier patterns and getting better boss crash bonuses. Note that bosses also have a MAX attack gauge that fills up during the fight and might be unleashed at any random moment (you can try to predict them by always sticking to the same strategy though).

One of the traits Sky Stage shares with the Shikigami No Shiro series is the complete absence of ground enemies. The art design is also similar, even though Sky Stage bears a grittier look and has in-your-face bullet patterns that seem a lot more menacing due to the lack of slowdown. There are cool character panels throughout with nice English voicing and well made, concise interactions for a storyline that will make more sense for longtime fans of the regular series (turn Event to OFF if you don't want to see the story bits). Access to a second loop is granted if you beat the game in a single credit while killing all five character cameos and collecting the invitation letters they carry. Suffice it to say, the second loop is a lot harder with suicide bullets and much faster enemy attacks, but if you get to the end again you'll then face Omega Rugal, the game's True Last Boss.

Co-op and a Versus mode with distinct gameplay rules complete the package for those who enjoy tagging along (or against) a friend. I did not venture into these modes at all though. I dedicated myself to the main game ever since I started playing, trying to devise optimal routes and approaches to achieve complete stage chains while collecting the most gold medals. The character I felt most comfortable with was Kyo Kusanagi. Some of his fellows might have better chances at survival or scoring, but the fireball certainly shines for easier possibilities in getting more gold.

Character balance notwithstanding, if there's one thing I wish KOF Sky Stage did differently is the implementation of a focus shot / speed decrease button, simply because it would make dodging busy patterns a lot easier. My final score with Kyo on Normal difficulty is below, reaching stage 2-1. There is an online leaderboard available for the game, but I haven't gone online with my Xbox 360 in ages. 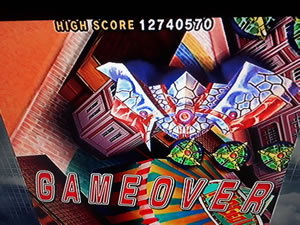