Given the success achieved by the Super Dimension Fortress Macross sci-fi anime series, which originally aired in 1982, it was just a matter of time for a video game to be released based on it. The Nintendo Famicom had the honor to be the chosen platform. However, since Macross (or Chōjikū Yōsai Macross for completeness sake) came out during the system’s infancy, not much excitement was/is to be expected due to its simple, repetitive design.

Graphics are primitive and lack detail even for 8-bit game standards. The cheesy music is also totally forgettable. In all honesty, only longtime fans of the anime might be thrilled by such a primitive little shooter. And kids who played it back then, of course, after all nostalgia lives forever. 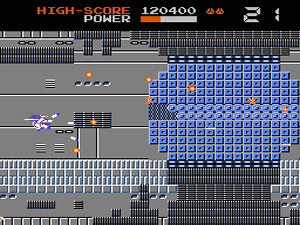 In this first Macross shmup the player controls a transformable VF-1 Valkyrie fighter in a neverending battle against an invading race of giant humanoid aliens known as the Zentradi (yes, I retrieved this sentence from Wikipedia since I know absolutely nothing about the series). The Valkyrie is a very versatile machine that shoots with button B and can assume three different forms with combinations of button A and directionals, as described below:

All forms of the VF-1 Valkyrie fire a single laser shot that cannot be upgraded at all. Limiting the firing rate of the different modes is therefore extremely odd, so my best advice is to use a turbo controller for a slightly better enjoyment of the game. Besides its regular firepower, the Valkyrie can also shoot out a a flock of homing missiles with the SELECT button. The stock for this extra attack is increased by taking the M item. Other items you might randomly come across are energy refills (P), 5.000 bonus points (B) and extra lives (E). Shooting the icons propels them forward, which might be necessary lest they appear inside the mine fields from round 2 onwards.

Each life comes with an energy bar that, when depleted, sends the player back to the very start of the round/loop. The loop is extremely short with only two sections where you fly in outer space until you reach the entry to the enemy fortress that hides the boss. Beat him and start all over again with a slightly harder difficulty and some extra enemies (the abovementioned mine fields, new Zentradi fighters, turrets prior to the fortress entry). Every new loop refills the energy bar and adds two units to the stock of special attacks. The stretch inside the fortress up until the boss is timed, and when the boss is destroyed the player collects a reward for time and energy left. Since you gain a lot more from the time bonus than from the energy in reserve, I always prefer to switch to fighter mode so that I can finish that section as fast as I can. In the initial half my preferred way to go is the Gerwalk mode, because if you choose Battroid the game seems to take forever.

All things considered, at least Macross does everything right in its simplicity, except for the unresponsiveness of the special attack on the SELECT button. The challenge increase seems to hit a plateau very early on, but there's a catch. Though very similar in structure to TransBot, released at around the same time for the Sega Master System, the loops in Macross become increasingly longer as the game progresses.

Longer levels are actually what made me think a little higher of this game. On a quick glance it could be considered another neverending marathon, but fortunately the game does become more demanding during higher, longer loops. In round 10, for example, my life stock finally started to go down, simply because it gets harder to get from one P item to the next and also because missile-firing enemies become more frequent. That's also when I noticed that fuel/energy actually depletes by itself very, very slowly.

Don't fret if you notice the score display roll over once you get to one million points. The correct high score can be seen in the brief intro animation after you press start to begin the credit. I was able to reach loop 12 and could've gone a little further, but once the score counter rolled over one more time I decided to call it quits and give away the rest of my lives to the Zentradi. Here's the final result I got: 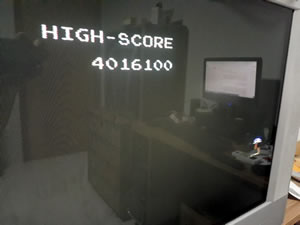