Even for those who consider them part of the shmup genre, tube shooters were always a rare breed and barely get any discussion these days. The one game that comes to mind the most for pretty much everyone is Tempest and its sequels/clones, and Gyruss to a lesser extent. However, even though this particular subgenre never really thrived in a grand scale the truth is that the Sony Playstation was home to a few interesting tube shooters, one of which is iS - Internal Section. Unlike its bethren N2O - Nitrous Oxide, Nanotek Warrior and Tempest X3, it unfortunately never came out of Japan.

iS as trippy as it gets. The shaded forms in the tube surface and outer surroundings are constantly changing according to the electronic music, whereas enemies, bosses and bullets are formed by simple arrangements of polygons that fly around at varying speeds for an experience that some people consider an embrionary version of Rez. There are of course many similarities between both games, but iS is much more shooting-oriented rather than geared towards synesthesic player interactions. The good news is that the game is perfectly approachable, and even relaxing once you get more familiar with it. I daresay it's an excellent way to get acquainted with the world of tube shooters. 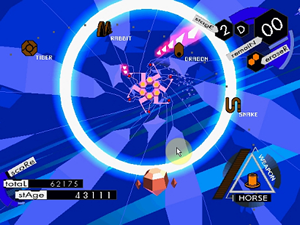 Dropping an eraser inside the tube

All game modes use the same control inputs, which are configurable in the options. One button shoots with natural autofire, two other buttons cycle through the available wepons and another one fires the so-called "eraser", the equivalent of a classic bomb. The eraser creates an energy circle that moves forward and sweeps all enemies across its path, including bullets. As for power-ups, you don't need to worry about them because there are none. Extra erasers are obtained every time you complete a new phase in the game, and all twelve weapons named after the Chinese zodiac are ready for immediate use. Part of the fun is in finding out which one works best in each situation, everything else revolves around shooting and dodging. It's that simple.

Quick note on my usage of weapons: favorite one for killing regular waves is Monkey, then Horse (which is good to hit enemies that float in the middle of the cylinder), Tiger (extremely powerful), Snake (good for some of the stronger waves and a few bosses/mid-bosses) and Bird (very efficient in specific areas); Sheep or Rat are best for hitting single spots (as in the riddles of the 6th stage), Ox is slow but blocks everything in its path; I practically never used Dog, Boar and Dragon, they're either clumsy or downright useless.

An interesting aspect, and in my opinion one that makes iS such an easy game to get into, is the fact that when you move the whole tube moves around you. You don't need to worry about the confusion of managing your craft's direction in a 360 degrees turn, as in Tempest or Gyruss. Both the gameplay and the actual difficulty benefit whenever this is implemented, after all moving around becomes easier regardless of what's coming ahead of you. Of course it wouldn't make a difference if the scrolling wasn't any good, but fortunately that's not the case with iS. The game never slips off its native framerate and is a beauty to look at when in motion.

Every stage has four "phases" prior to the boss, which is fought in an open plane in pure arena fashion. Phases are separated by a short section of invincible spinning blocks reminiscent of Xevious. Die anywhere, including during this block transition, and you have to restart the phase from the beginning. All enemies arrive and attack in specific formations with very rare instances of overlapping. There are lots of mini-bosses and a few surprising breaks in the game flow, such as the whole 6th stage and its block riddles, including a lengthy block maze in phase D. Even though the game adopts an abstract concept for graphics, each stage has a general theme that dictates the shapes forming everywhere around the player (gems, characters, bricks, outer space, etc.).

For each fully destroyed wave and mini-boss an extra amount of points is obtained, as you can see from the bonus tags that float towards the player. Some of these small bonuses increase in value if you eliminate the opposition faster, and you can even trigger extra enemies by doing that (such as the extra laser snake in stage 5D). Regardless of how well you perform in killing everything, the bulk of the scoring system is actually in no-missing whole stages. Deaths are extremely detrimental to scoring because each death takes away a good chunk of the stage bonus completion. I couldn't grasp the exact rules, but from my brief experience with the game three deaths are enough to give you no bonus at all in any level. Besides, the amount of earned extends will be drastically reduced if you die, thus affecting the completion bonus of 30.000 points per extra life.

When you realize you can amass so many extra points and lives just by avoiding death, some of the most intricate full wave kills aren't worth the risk anymore. Keeping the finger on the trigger (as the announcer from Donpachi would say) is still good practice though, even when you're amidst the Xevious indestructible blocks. Sometimes you'll hit spots that hide fish, which then move out as if released from prison or something like it. Hitting fish spots gives you some points and perhaps a surprising view of an up close mackerel (saba) but that's it, just a quirky mysterious detail in a relatively straightforward shooting adventure.


Besides the Normal game mode, iS - Internal Section also has a few "arrange" modes such as Enhanced (which is considerably harder), Ambient 1/2/3 and Fullauto. I have no idea what's behind Fullauto, since the game doesn't respond to any input there and seems to play by itself. In all of the Ambient modes, which play just like Normal mode with minor difficulty alterations, you can select your own soundtrack by choosing a different song for any level or even swapping the disc for a music CD as soon as the credit starts (that's why you see a save moment before the start of any game). As mentioned above Options include button remapping as well as weapon edit (alter weapon cycling order), sound and screen adjustments and automatic saving.

I had great fun and urge everyone to try this neat little game. I tried to do my best in Normal mode, with the final results shown in the picture below. Cool detail: for all 1CC/ALL runs you're entitled to see a few extra stats just by pressing ○ at the highlighted score. I assume that "worst" section is supposed to save completion results with the lowest possible scores one can achieve, but I wasn't willing to test that. 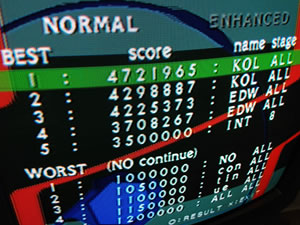