I often ask myself if the the 8-bit generation was ready to handle arcade ports of rail shooters. Most examples say it wasn't, but when you realize several other rail shooters were also released for less powerful platforms then you can somehow forgive Galaxy Force on the Sega Master System. Never mind the confusion related to the arcade releases of Galaxy Force and Galaxy Force II, which widely replaced the former to the point almost no one ever saw it running. If you'd still like to have a glimpse of what it *looked like* you could try the Master System port, yet from the references I got it probably isn't the case.

Anyway, the only thing one can infer from playing this version of Galaxy Force is that little is to be expected that resembles the frantic, jaw-dropping action of the arcade game. Gone is the thrilling sensation of cruising through space taking down multiple targets. Just the basic framework was preserved in the transition: you fly a spaceship in rail shooter fashion through four different planets in any desired order, shooting down enemies until you enter a tunnel full of turns designed to test your piloting abilitites. For some cinematic flair, in every stage you see your ship taking off from a hangar. 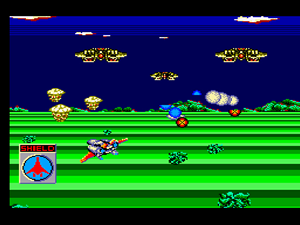 Stage selection is completely up to the player. The default order is an outer space station, then a volcanic planet, a plant world and a desertic landscape. Once all of them are conquered you will battle the final and only boss in the whole game. Yes, there's only one actual boss. Stages in Galaxy Force have no proper target cores at the end of the tunnel sections, which is one of the main sacrifices made to squeeze the game in the Master System cartridge (bosses are replaced by a brief animation showing the destruction of the planet). Sure, as the back of the box says it's got not double, not triple, but four times the playing power of a regular cartridge - meaning 4 Mega power! But hum... no, you don't get the hottest space combat, nor the baddest explosions. As for the sounds, well... at least we can say the soundtrack is undoubtedly the best thing about this port.

Many enemies are unique to this version, which tries to preserve the feel of the original game by means of the background scenery alone. Nevertheless the enemy gallery is practically the aspect that best conveys some sort of sprite scaling; tunnel sections use a flashing effect over static pillars to achieve the illusion of scrolling into the screen. For all it's worth, the trickery kinda works. The overall frame rate is still apalling and needs some getting used to. You still get to lock onto multiple enemies with your crosshair aim, but never in a reliable, repeatable fashion.

Another concession made on the port is the absence of the stage timer, and by extension the acceleration and break inputs. Everything is much more simple now, and your only concern while moving around in your killing spree is to preserve energy. The energy shield meter is color coded and changes as you get hit. As a general rule, the more red and flashing it gets the closer you are to biting the dust. Shield energy is automatically recovered at the end of the level after your bonus is calculated based on the amount of hits/kills you just achieved. Note that the more enemies you destroy the higher the bonus gets for each enemy in the final tallying.

The elimination of the timer element more than offsets the difficulty imposed by the confusing sprite scaling effect and the way the turns behave inside the tunnels. These turns vary a little in length with every new level, which means that each stage tunnel demands a certain tapping strategy for you to perform the movement without hitting the walls. After a while you notice that later levels are actually easier than the starting ones, at least this was my case. In fact, I even consider the first stage to be the hardest of them all by dint of the random nature of the meteors and the lack of ground scrolling for better evaluation of enemy approach. The turns inside the frst tunnel are also the hardest ones to perform.

Though considerably butchered in technical terms, my feeling after playing Galaxy Force on the Master System is that the game isn't a total wreck. It's fun in an awkward, nostalgic manner, with a final message that calls players out for using continues and advises them to beat the game again on a single credit if they want to watch the real ending (not the one where the ship crashes onto the landing platform). All in all, I liked that the difficulty was duly adapted to the console's limitations, unlike what happenened with the remarkably tough Space Harrier port.

Here's the final 1CC score I got for Galaxy Force on Sega's 8-bit machine: 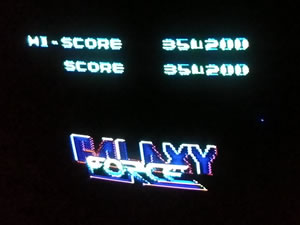