When Gravitar was released by Atari in the arcades a new type of shooter entered the gaming scene. I was different, and it was decidedly very challenging. Due to its unique gameplay, only a few other titles were bold enough to follow in its footsteps, of which Subterrania is definitely one of the most interesting and exciting ones. Released both in Europe and in the US, this outstanding game was unfortunately a commercial failure due to a combo of bad advertising and word of mouth about supposedly hideous controls and impossible difficulty. Suffice it to say neither of these foul gameplay accusations is true in the slightest.
The overall feel of an Amiga video game is no coincidence, after all Subterrania was developed on Commodore Amiga computers for specific use on the Mega Drive. That's probably why it does not share the same lukewarm or disastrous results of both Amiga shmup conversions for Sega's 16-bit console, Battle Squadron and Xenon 2 Megablast. In fact, it's actually one of the best Mega Drive games I have ever played regardless of genre. Players who're not afraid of a challenge and are keen on experiencing something different and compelling with outstanding music and gameplay will feel right at home here.
Infiltrating underground environments to defeat aliens and rescue trapped miners is how Subterrania initially works. You pilot an experimental fighter craft and need to fulfill several missions in order to go from one stage to the next. Prior to the start of every level, briefing instructions are displayed and indicated over a full stage map, then you're dropped in a specific spot where you need to return to once all mission objectives are completed. Controlling the spacecraft is accomplished by using button B for thrust, down to reverse-thrust and left/right to turn. Button C either shoots the weapon or activates the resource selected by using button A. 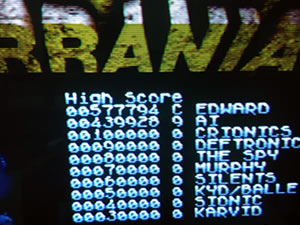