Something weird must have happened inside Technosoft's headquartes as the 90s came to an end and the 32-bit generation was beginning to fade. By 1997 the company had somehow failed to keep the momentum since the arcade and home releases of Hyper Duel, and Thunder Force V would still take another year to hit Japanese shelves. Blast Wind came out with little fanfare in a very low print run, surrounded by rumors that it was actually supposed to be released in the arcades before the Sega Saturn. The game made little impact and its rarity soared, soon becoming a cherished prize for players and collectors alike.
The reason why Blast Wind doesn't share the same appreciation as, say, Hyper Duel, which is equally sought after as a collectible, can certainly be attributed to a few aspects that aren't usual for a game developed by Technosoft. Being short and easy, for example, isn't a nice combination for a full-blown 32-bit title. The game also lacks the graphical edge you'd expect from such a powerful platform. It kinda feels like a 16-bit game at its essence, only polished by the power of superior processing. Many of its graphical assets and sound effects, for instance, are a throwback to Thunder Force IV. And while typical Technosoft and decent in its own right, the soundtrack doesn't make the lasting impression you'd normally expect from such a beloved developer. Besides, the sound balance is off and the music is almost totally engulfed by the sound effects.
On the other hand, Blast Wind does offer more than the basic shooting thrills of old, expanding a little upon the regular Technosoft completion bonuses well known by fans since Thunder Force II put the company's name on the map.
First stage of Blast Wind with the blue ship on an easier setting
(courtesy of YouTube user MAX 300)
A nifty intro shows a little bit of the story about two pilots being sent to battle an alien threat known as Gorn. Two ship variants can be used by choosing pilot/player 1 (Kyo, blue ship) or pilot/player 2 (Forn, orange ship). They both use two types of weapons, the "switch" shot and the homing shot, which by default work with buttons A and B respectively, with button C reserved for bombs (all inputs are fully configurable in the options). Shot types, however, behave differently for each ship/pilot: Kyo fires a wave shot that can crawl over surfaces and an X-shaped homing pattern, whereas Forn fires a laser and an aiming spread vulcan. Playing with Kyo is definitely easier than doing it with Forn, whose weapons feel all around weaker.
Regular upgrade items materialize as power-ups (P), extra bombs (B) and trailing shields (S). Picking up a power-up not only increases your firepower, but also creates a horizontal barrage of energy that gives you momentary invincibility (the accompanying visual effect is quite cool but odd at first sight). Some enemies will also release coins worth 100 points each. These coins – which look very much like the power chips you see in Compile games of the Aleste series – are very important in the long run because for each 50 you collect the next one will fall as a 1UP (be quick to grab it or you'll see it fall away like an ordinary coin). You can also achieve two score-based extends at 400.000 and 2 million points.
Blast Wind's claim to fame appears in the splitting path mechanic implemented by switches that lead to alternate paths containing different enemies and boss forms. All you have to do is touch the switch with the ship to activate it. Some switches release random items instead, but these are clearly identified so that you know which switches to actually trigger.
Path splitting does provide some degree of replay value, but when you start to play for score you'll often be restricted to specific paths in order to get more points and coins. After all, coins are the means to extra lives and each life remaining gives you 100.000 points when the game is beaten. Other than that, everything else about the scoring system is related to preserving resources. End of stage bonuses are given for the amount of bombs you have, while items in excess grant either 3.000 or 5.000 points each. Certain spots can also be shot at to uncover varying rewards of 1.000 or 5.000 points (signalled by $ and stars). Lastly, some bosses can be exploited by targeting destructible parts before going for the main kill. 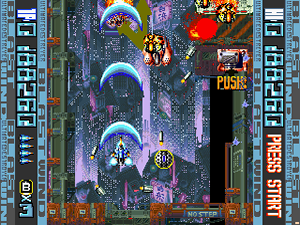 Push to bypass
If there's any rank in Blast Wind, that might only be noticeable during boss fights and even so it isn't quite clear how it works. Sometimes one of the side turrets of the first boss just takes a lot longer to be destroyed for no apparent reason, but I also saw some odd unexpected behavior on the third boss. Deaths take away one level of firepower, but fortunately the supply of power-ups is so rich that soon you're back to max power again. Shields are great to block some boss attacks, as long as you remember that after taking too much damage they deplete and turn into a regular power-up.
Another feature that adds to the ease of completion here is the absence of harm when touching walls and scenery. That doesn't mean you'll feel no pressure when navigating those quick levels though. I had many annoying and unexpected deaths because I got stuck in a tip of the scenery, for example. Even though the vertizontal orientation feels a little offset by the side HUDs, some bullet patterns still feel cramped and are better off completely avoided instead of dodged with twitch movements, at least when playing with the blue ship. It just feels a little too fast for my liking. This impression changes when playing with the slower orange ship, which is also the better choice for collecting coins because it lacks those small homing missiles that come with the blue ship weapons.
So which ship to choose then? What is more important, more power or better mobility? The funny thing about this is that unless they're told or they pay attention to the attract mode, many players aren't even aware that you get a ship with completely different weapons on the player 2 side.
The Saturn disc includes automatic save and optional tweaks, also allowing all sorts of button customization. My best final result playing on Normal difficulty with pilot Kyo is below (blue ship, player 1). Yes, Blast Wind is relatively easy fun but you'll feel a lot more pressure when trying to no-miss to maximize your high score. I always ended up screwing somewhere and couldn't get it. Maybe next time! 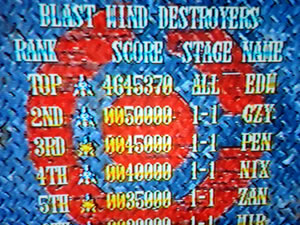