Once again, the time has come for more fun with Toaplan's classic Tatsujin. My overall impression lately is that it has become more appreciated over the years, either within the works of Toaplan or in the STG community in general. A long time ago the approach I had towards the game changed somewhat, especially after playing the Mega Drive Western Truxton incarnation. The PC Engine version would take a couple of years to come out after the Mega Drive port, equally standing as a valuable conversion that pretty much paralleled all the original features from the arcade, of which difficulty is definitely the most widely talked about by shooting game fans.
Since it came out only in Japan, this version is only referred to as Tatsujin. A quintessential sci-fi shooting adventure that follows in the design footsteps of Kyuukyoku Tiger, the game consists of five long levels where you must battle enemies coming from all sides, flying over asteroid terrains and wide open sections and fighting huge bosses as the end of each area. Your only inputs are shot (button II) and bomb (button I), with all other resources obtained by collecting capsules along the way. It's a perfect embodiment of the shooters of old, in which surviving tough checkpoints is totally dependent on how you're able to power up your ship and use your stock of bombs.
The start of the journey in Tatsujin
(courtesy of YouTube user and developer Old Games Database)
Even though Tatsujin isn't endowed with fancy visual assets (such as parallax), the graphics are still colorful, detailed and do a great job in keeping with the tone of the arcade original. Outer space sections are as drab as it gets but the visuals get better when you're flying over terrain. Granted, they sort of lack the grittier edge of the arcade, which is to be expected with the new resolution in the transition to the console format. You can however achieve a pseudo arcadey look by going into the secret options at the start screen: score exactly 7.100 points and soft-reset with SELECT + RUN, then press SELECT + RUN again and set screen to "slim".
In the vastness of outer space you'll come across small carriers that drop items when destroyed. The basic one is the power-up (P), for which you'll need five in order to get an increase in firepower. This means that it takes ten Ps to achieve max power. Choosing the weapon type is done by collecting a color-based capsule: red is the default vulcan, green is a soft straight shot and blue is a visually impressive laser that expands outwards in five deadly streams when maxed out. The item gallery also includes speed-ups (S) and extra bombs (B). The bomb, a well-known trademark of the game, is a skull-shaped round explosion that inflicts massive local damage while melting all on-screen bullets.
After reaching max power you can stock 4 power-ups before P items stop coming. There's no unlimited stockpiling of power-ups like in the Mega Drive port, but you can still amass as many bombs as possible even though you only see 9 in the bomb counter. Every surplus P, S or weapon item you take is worth an extra 5.000 points, and that's the main scoring device in Tatsujin. Some people are able to max out speed and surf the rest of the game collecting all incoming capsules, but I suck at that and restrict myself to taking only two speed-ups for the sake of safer maneuverability. Recovering from death can be intimidating in certain checkpoints but it's always possible (note that dying too quickly will send you even further back in the level).
Despite the in-your-face bullets and the unfavorable odds of the gameplay, such as enemies coming with absolutely no warning from below, Tatsujin manages to lure players for more credit after credit. This is usually the case with good strict memorizers, and the game is no exception to this rule. Aimed shots are the norm, but every now and then flocks of more powerful enemies that behave like mini-bosses start firing combinations of fixed and aimed patterns. The good news is that no matter how fast and cruel they are, there's often a nice way to deal with them if you know what's coming. Some just won't fire when close to the bottom line, and methods like point blanking and just staying put work wonders. 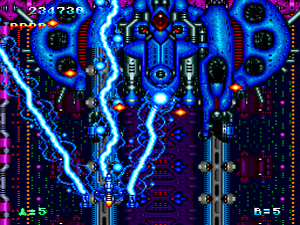 The power of laser in outer space
Tatsujin is notorious for not having any actual separation between stages except for the change in the music, with no extra bonus whatsoever for a good performance. Since no extra score is given anywhere besides collecting extra capsules, there's obviously no need to refrain from bombing if necessary. A long section with moving turrets in stage 3 can send your bomb stock through the roof, thus providing the necessary inventory you might need to cheap out on the more intricate sections later on. Wach out for beacons that can be destroyed if you're using the appropriate weapon as soon as you reach the ground prior to bosses, which can give you up to two extra lives. Score based extends are awarded at 70.000 points and for every 200.000 points afterwards.
One special observation about the PC Engine version concerns the difficulty curve. For some strange reason it starts out a tad harder than both the arcade and the Mega Drive version. Bullets are slightly faster and lasers are fired at breakneck speeds, requiring stern memorization from the get go if you don't want to use bombs so early in the credit. Bosses are also interesting in that they don't necessarily get harder as the game progresses. That sort of goes in line with the realization that provided you know what's coming and select weapons wisely this port isn't as hard as its widespread fame indicates.
When put side by side with the Mega Drive port, my perception of this version is that it presents a more even difficulty curve despite the initially high aggression levels of the larger foes in the first stages. It doesn't incur in bullet visibility problems as Sega's version does in the final stage.
The high score below was achieved on Normal difficulty (check the trick mentioned above to see/change the difficulty level). I reached the 4th stage in the second loop. 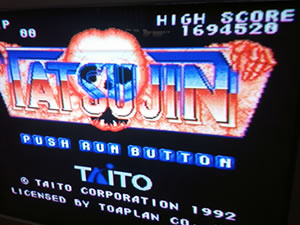