Horizontal
Checkpoints OFF
1 Difficulty level
15 Stages
Ship speed fixed
- - - - - - -
Developed by Mere Mortals
Published by Phoenix Games in 2005
It goes without saying that the dark chapters of any video game genre are understandably ignored by everyone. In the case of the Playstation 2, which is a veritable gaming powerhouse, anything released by Phoenix Games fits the bill with little effort, and as far as shmups go the mere mention of the company sends chills down the spine of every fan of the genre with a little more knowledge of what went on in the European scene during the final moments of the console.
Once again the foul stench of Phoenix Games is present in this blog by means of Shadow of Ganymede, whose only reasonable claim to fame is its cool-sounding name. The defunct company’s trademarks are all there: brainless, boring, lifeless gameplay that’s monotonous almost beyond belief. While certainly a little tougher than Guerrilla Strike or Search & Destroy, unfortunately this superior challenge does not come from any noticeable attempt at delivering something more interesting than what you’d get from a bad 8-bit video game.
The oddest thing is that I can’t say I’m completely lost for words when trying to categorize such a dismal excuse of a game. I’m here writing about it after all, ain’t I? 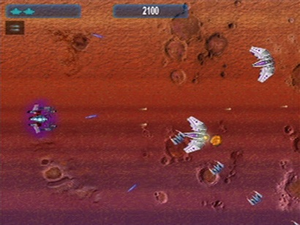 The red moon of torture
In the future, Jupiter’s satellite Ganymede is the source of an evil force that’s threatening the mining activities in the planets of the Solar System. Your mission is to fly from left to right over planets and moons to destroy the enemy armada. There are 15 areas to be cleansed of evil, but only one weapon to use in the process (button ×) with little variation in the way of firepower. The journey will require lots of focus and dedication since the game will do everything in its repetitive power to wear you down. Backgrounds alternate between outer space, a world map (only in stage 2), desertic moon landscapes, planet outskirts and arrangements of wall tubes. A few color swaps are applied here and there but that’s it, with no bosses at all for you to indulge in fierce shooting battles.
Every now and then one of the enemies will leave behind an item after being blown to pieces. It might be a wrench (power-up), an hexagon net (1-hit shield) or a candy (extra life). Wrenches increase the power and the reach of your weapon, which maxes out when the fifth one is collected. Oddly enough, you can cycle through the power levels that were already reached by pressing L1. My guess is that this was implemented because power level 2 feels better than power level 3, other than that there’s no reason at all to change your firing pattern once you’re sufficiently powered up.
As for the enemy gallery, it’s typical Phoenix Games bad. By the third stage you begin to see ground turrets, but they’re destroyed with a single shot and you’re left wondering what was the point of even adding them to the game. The little variation there is appears when your foes start arriving in the screen turning and aiming at your direction instead of only shooting forward. That’s most likely where players will die because the minor inertia when moving the ship might make it a little harder to avoid the overlapping enemy attacks. Losing a life in Shadow of Ganymede can quickly escalate to a GAME OVER if you don’t keep your cool because then you lose all firepower and it might take a while for power-ups to start appearing again.
A failed attempt at the first stage of Shadow of Ganymede
(courtesy of YouTube user GXZ95)
A minor strategy that helps survival is avoiding to take the shield icon if you’re already protected by one. Since items move slowly to the left, having a spare shield floating around is nice because you never know when you’re going to need it. Note that the shield does not protect you from collisions though, even at the end of the level when the AI takes control of the ship and might ram it against an incoming enemy (yes, I died a few times because of that). Finally, even though you might collect lots of 1UPs you can’t stock more than five spare lives.
Higher stakes on lives lost should at least give you that feeling of tension and anticipation one always gets when facing a situation of impending failure, but the gameplay is so lame you couldn't care less about it. There's no excitement, no good music, no specific detail to call out on the nigh possibility of considering this one a guilty pleasure. Yes, it's that pitiful, and enduring this torture to the end is something I will only try again on the basis of physical threat and torture.
And below is my 1CC high score for Shadow of Ganymede, folks. I'm probably alone in my achievement here, so I dare everybody to try and beat it. Come on, if you got a cheap copy lying around why not share my suffering and accept the challenge? The game even offers auto save and an optional controller vibration function! 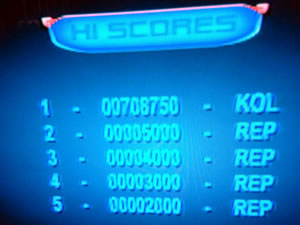