Very few publishers had such an appalling fame as Phoenix Games. Everything indicates that they’re now defunct, but until recently they were very active in their mission of delivering hastily developed games to the European market, cluttering shelves with budget titles for the PC, the Playstation 2 and the Nintendo Wii/DS. Speaking of Sony’s platform, one cannot avoid the idea that a surprise in mediocrity is always hidden inside each one of those shiny blue boxes with relatively well-designed art. Guerrilla Strike is one of four three shooters released by the company for the Playstation 2 and does not stray from this general notion (the other three two entries are Shadow of Ganymede, Search & Destroy and the extremely rare Ocean Commander).

Oh my, where do I start… There isn’t any starting point, really, at least not in the sense of what’s to be expected from a retail release for the Playstation 2. Yet the fact that such a low-standard product has been professionally pressed and sold is nothing short of amazing. Abandon all hope, ye who boot Guerrilla Strike in search of an exciting vertical shmup. The lack of real value in this game is unbelievable, therefore boredom will be the only real reward for giving it a chance. I almost fell asleep while playing. 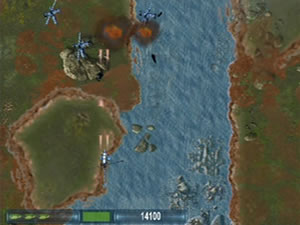 As a pilot of the Allied forces deployed to fight an evil army, you need to take control of a helicopter and plow through 15 stages of some of the most basic shooting ever conceived. Imagine a rudimentary NES shmup with a repaint on graphics and you get the picture. In several aspects, however, Guerrilla Strike fails to even rise to the standards of a rudimentary NES shmup. Since when are bosses a staple of scrolling shooters? Forget about them here, you won’t find any. All levels end without a single trace of a battle against a more powerful enemy – the scrolling just stops and the game waits for you to authorize the start of the next level by pressing ×. As you can see, that huge dirigible in the game cover is just deceptive advertising.

The primary weapon is fired with button ×, and depending on availability a secondary weapon is fired with ○. Items are randomly released by some of the larger enemies. Only two upgrades exist for the main weapon, which in its maximum level receives two weak spread shots. If you have acquired more than one secondary weapon (up to three), cycling between them is accomplished with the L1 button. A wrench item provides full health recovery, and according to the manual there are also extra lives to be taken. Since I didn’t see any of them while completing the game without dying, I assume that either you only come across extra lives when you’ve died at least once or it's just another sign of the sloppy programming (the other is the fact that two secondary weapons are exactly the same despite being represented by different icons). Note: secondary weapons aren't carried over to the next stage, and although you can't see it they have limited ammo.

Guerrilla Strike is such a poor game that there are probably less than a total of 10 types of enemies (ground and aerial), which are combined throughout all stages as the terrain alternates between desert, grass, islands, sea and a recurring generic factory landscape. The pacing is lethargic, as well as the enemy spawning routines, and there’s no scoring system that goes beyond killing whatever comes your way. Besides being basic to the bone the game is pretty much devoid of any challenge, even with the capped firing rate. Not only is it tough to deplete that health bar, but you're also granted with those health wrenches all the time (the only way to die instantly is by crashing against an enemy). When you think things are about to become a little interesting the game soon gets back to its yawning rhythm, and as much as I waited for something different to take place nothing happened at all. Perhaps that mild screen flashing effect that comes with every enemy kill was introduced in order to liven up the game somehow. Unfortunately, Guerrilla Strike is so inane, long and repetitive that it doesn’t even serve as a poor man’s Under Defeat.


A credit of Guerrilla Strike
(courtesy of YouTube user GamerXZ95)

After trying to find at least one positive thing to say about this abomination, I think I could point out the animation the developer was able to come up with for the helicopter itself. I like it, the chopper bends and moves around with graceful sleekness, pretty much like a firefly would. Another highlight within the unremarkable soundtrack is the BGM for the second stage, it’s almost unfitting in its notable effectiveness. Themes start repeating in stage 6, so that cool song fulfills its purpose of helping the mood in stages 2, 7 and 12.

Since it was designed exclusively for PAL systems Guerrilla Strike does not offer a 60 Hz option, thus presenting that characteristic frequency flicker when played directly on a 60 Hz console (beware of headaches). There are no extra difficulty settings whatsoever, loading times are a bit abusive and the half-assed animated intro is never shown again once the start screen appears. Well, at least there’s a save function for all it’s worth. The 1LC high score below was saved to prove I endured the torture till the end. 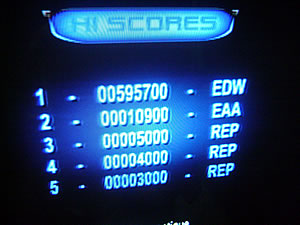