Eden's Aegis is the last PC free shooter released by the enigmatic one-man development institution known as X.X Game Room. It's easy to mistake it for Eden's Edge, which is actually one of his first attempts at creating a challenge for those who enjoy the thrill of dodging bullet curtains. For the record, 1.11 is the definitive iteration of Eden's Aegis, so that's what everybody's been playing for years now.
It seems the original page from the developer is offline at the moment, so just head to the download page and extract the downloaded file, plug in your favorite controller, run the executable, hit OK on all pop-up boxes and there you go, bullet hell action instantly available. With obvious influences from the works by Cave, Eden's Aegis can be defined simply as a shooter where your main objective is to destroy larger enemies in order to cancel bullets, thus turning them into precious gold and surviving the odds in the process.
Graphically the game is very similar to the other main work by X.X Game Room, Blue Wish Resurrection and its Plus variation. And that’s probably my main gripe with it, since apart from the choice of the avatar being a flying girl instead of a spaceship both games bear a strikingly undistinguishable appearance, which is very much defined by open space punctuated by raw textures for ground surfaces and a fireworks display of medals and bullet patterns. Of course this is alleviated by the fact that we’ve been given the chance to play these very fine shooters for free, so no big qualms about that.
One could say these games are all about gameplay, meaning 100% substance over style. 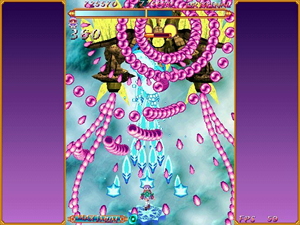 Beautiful purple bullet curtains!
Inputs work with shot, full auto, special attack and bomb. By holding shot you get a focused firing stream with reduced movement speed. The special attack adds a concentrated burst of power to your shot pattern that lasts a few seconds, which then recharges automatically for the next use as seen in the meter on the bottom left of the screen. The bomb is self-explanatory, granting instant invincibility to the character during its animation. Autoguard is a feature that’s turned on by default and sacrifices one bomb for every hit you take. “Wait” is initially also set to ON and means that you’ll always have slowdown whenever bullet count reaches a certain threshold (set it to OFF if you’d like to experience a much harder game overall).
In all game modes there are originally only two characters available. You can either beat the game with them to unlock the other two or just create an empty .txt file on the game’s directory named “yutori”. All four exhibit different traits for firing patterns, bombs and recovery times for the special attack. In general the further down they are in the selection screen the harder it is to control them, which means Nanathy is the character to go for beginners while Ridmie requires a deeper knowledge both for survival and for scoring.
The rules of gameplay are the same for all modes (Heaven, Original and Hell). Enemies release golden gems for taking, and if you kill them with special attacks all medals are automatically sucked into the avatar. Death explosions of larger enemies turn every nearby bullet into gems, in what’s the most obvious device in the risk/reward scoring technique: kill them right away to survive or let them live long enough in order to reap more points from on-screen bullets? The good news in that regard is that you'll see health bars for all enemies that are at least mid-sized. Gem counter increases during the level and decreases during mid-boss fights (faster) and stage boss confrontations (slower), getting cut in 1/3 for every hit you take.
Hidden ground items, such as extra bombs and a solitary extend in stage 4, will only be uncovered by hitting them with the special attack. Bombs are also very important for scoring since they turn all on-screen bullets into gems. Score-based extends are granted with 7 and 30 million points.
Hell mode's first stage with Nanathy
(courtesy of YouTube user Vysethedetermined2)
Like all previous titles from the same developer, Eden's Aegis is a great pick-up-and-play shmup that provides instant fun from the get go, at least in Heaven and Original modes. Enemy projectiles aren't overly fast, the constant slowdown can be considered a nice exercise in tight bullet hell practice and you can even hold the special attack button so that it's repeatedly deployed after each recharge cycle. For a regular bystander the difference from relaxed survival play and high level scoring attempts seems to be trivial, but it actually requires thorough route/positioning choices and tight usage of the special attack. Never mind switching wait or autoguard to OFF, since they do not affect any aspect of the game with regards to scoring.
During the very short time I played the game I cleared it a few times in Original mode, improving my score a little without training any particular section. Eden's Aegis does include practice options though, as well as stage select and the ability to change the color of bullets and save replays – you just can't pause, for pausing denies replay saves and goes as far as not allowing you to write your initials in the high score board. The game does warrant a lot more dedication than the short spell I was able to devote to it, but at least I had good unrestricted fun. My character of choice was Nanathy. 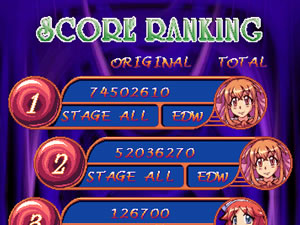 Note: I didn't try Hell mode at all, which is the only one that has a TLB (True Last Boss) in the end, accessible by 1CCing and having at least one bomb in stock when the fifth boss is defeated.
Posted by Edward at 5:00 AM