For those people who wondered what Konami was thinking when developing and releasing the fourth chapter of the Parodius series for the Super Famicom in 1995, the answer actually came quite quickly. As usual, the game was just too good to be restricted to a single console platform, so the company soon ported it to the 32-bit generation with the added subtitle of Forever with Me, whatever that's supposed to mean. On the outside it looks and plays just like the 16-bit original, albeit with a few standout changes in the core game that are obviously aimed at turning it into a better experience overall.
The aspect that gives Jikkyou Oshaberi Parodius - Forever with Me its name is a comical announcer who’s always babbling random stuff (in Japanese) as the game unfolds. An extra female announcer is also present in the cooperative 2-player mode, which is one of the most prominent novelties of both 32-bit ports since there is no co-op in the Super Famicom version. Being able to tag along with a partner probably makes this particular chapter the best one for sheer co-op fun because of three things: a character roster that allows for great combinations of powers and abilities, the complete absence of slowdown and the difficulty level being the same as in the 16-bit original.
Doitsu on manual power-up mode
(courtesy of YouTube user The VideoGames Museum)
On top of the nonsensical and colorful design that had its details touched up a little bit, the Saturn version also comes with a few other changes (keep reading). The core gameplay remains intact of course, as defined by the classic mold first introduced in the Gradius series. If you decide for manual power-up mode after selecting the character (the lower option), you'll have to press a dedicated button in order to activate the upgrade that's highlighted in the weapon array, which gets shifted to the right as you collect power-up capsules. By choosing auto power-up mode the game does the upgrading automatically for the player, but it's still possible to activate the upgrade yourself if desired, such as when you want to have more speed. The other inputs are shot, missile (which can be combined in the same button, of course) and bell power.
As all Parodius fans know, rules on the use of bell powers are inherited from the TwinBee franchise. They are either generated periodically in between capsules or released in batches by mid-sized enemies, and come in the following colors: yellow (score), blue (bomb), green (instantaneous inflation + invincibility), white (bullet-cancelling kanji shot), red (three energy barriers) and purple (turns all weak enemies into power-ups and/or bells). Shoot the bells to juggle them and switch their colors, just note that it takes four shots to change from yellow to the other colors in sequence. As one of the main sources of scoring, yellow bells collected in sequence soon max out at 10.000 points each, provided you don't let any bell get past you.
In between regular power-up capsules and bells you also get gray capsules that work as smart bombs. Don't use them if you want to get the scores from the kills though, because all enemies wiped out with the gray capsule yield no points at all. That said, the other main source of points besides bells are the secret fairies that must be uncovered by shooting at their locations. Each one is worth 10.000 points, and if you're the type of player who cares about completing extravagant achievements you can strive to collect all 70 fairies to unlock secret character Dracula-kun, and then a whole new set of 70 faiires to unlock its sibling Kid Dracula. Fortunately it's possible to take a shortcut by means of a secret code if you want to add these extra characters to the default 16.
Relatively easygoing when compared with the arcade games in the series, Jikkyou Oshaberi Parodius does not deny its console sensibilities and is probably the perfect chapter for immediate "pick up and play". Inspirations from several Konami titles abound, and not only related to the shoot'em up realm. Tokimeki Memorial, The Legend of the Mystical Ninja, Lethal Enforcers and Taisen Puzzle-Dama are used as themes for complete stages, with the later two being reworkings or completely new ventures on the Saturn and Playstation versions. New details on enemies and bosses, minor graphical enhancements and a few shifts in the CD-quality music are also in place. 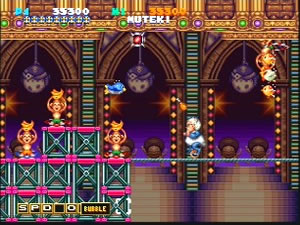 Pentaro to the rescue
Going beyond the basics, high level play also involves the convenient use of the purple bell, which was introduced in Gokujyou Parodius but is absent from Jikkyou Oshaberi Parodius on the Super Famicom. Another important alteration in this regard is that the extend routine is not interrupted when you score more than one million points. The first extend comes with 20.000 points, with new ones awarded for each 100.000 points afterwards. It's not uncommon to amass a huge amount of extra lives if you play well enough, which obviously helps in reaching higher loops more easily. Since the difficulty increase after you beat the game is also a tad tamer than what you'd get in any of the arcade titles of the franchise, chances are you'll be facing a dedicated Parodius marathon type of challenge on the first two rounds/loops at least.
As expected, this port also preserves the checkpoint-based save function. When you pause and press L, the middle option contains three save slots while the upper option is used to load them at any time. Pausing and pressing R, on the other hand, allows you to return to the title screen on the lower option. A tiny in-game improvement appears in a new display just below the indication for the hi-score, which shows the current difficulty level and loop. In the title screen you also have the choice of two new special game modes: Omake 1 is a completely new single stage where you're supposed to get high scores, whereas Omake 2 works as a racing mini-game where the objective is to get to the end of the area as fast as possible.

Click for the main menu translation for the Normal game in Jikkyou Oshaberi Parodius - Forever with Me on the Sega Saturn
Even though on a first glance both 32-bit ports are very similar, there is a specific switch in the options screen that alters the gameplay significantly. In the case of the Saturn version, this tweak is called "Extra". Its function is to change enemy formations completely, an alteration that makes the game a tad harder than usual. On the Playstation port this is replaced by "Accident", which adds polygonal-based bonus areas to the end of each level. Besides these interesting tweaks to the base game, both ports allow the OH! bogus power-up to be replaced by a slot machine for bells if you turn "Slot!" on. As for "Duet", "Ikari" and "Nage", they are specific tweaks for co-op play.
Once I got re-acquainted with the game I decided to play with Upa (the baby boy) and got the result below in one of my first serious credits. I played with auto power-up on full defaults (difficulty 4, Roulette ON, Slot!/Extra/Revival OFF, Oshaberi ON) and reached stage 3-6. I had great fun and felt so comfortable with the automatic handling of my upgrade capsules that I didn't even try to play the game with manual power-ups. I did activate a second speed-up right after the first one though. 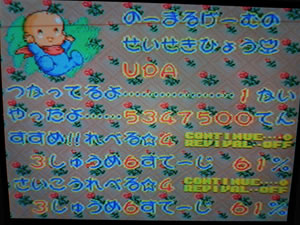 Now I guess I'm ready to move on to one of the ports for Sexy Parodius!
Posted by Edward at 5:00 AM