Adding difficulty to the controls in a shmup will never be something people expect, let alone desire. Freedom of movement is what defines this genre after all. Gravity based shooters, however, are in a league of their own in terms of controls, and are often cited as some of the hardest games out there. I won't disagree with that, yet I'll firmly stand by my opinion that these are some of the most immersive and addictive gaming experiences once you start to come to grips with how they're supposed to be played.
That said, it's a mistake to underestimate releases like Terra Trilogy, a compilation of three vector-based games originally created for PCs a few years back which flew completely under the radar wherever it was released. Not only does it offer a great trip down memory lane for old timers who grew to love classics such as Gravitar, but in the case of Terra Lander and its sequel it also simplifies the controlling method quite a bit by sticking to a straightforward twin stick mechanic that's the epitome of pick up and play these days. Move with the left analog stick, aim and shoot with the right analog stick, with absolutely no need to rotate the ship around. Cool, huh?
Terra Lander starts simple enough but gets quite demanding halfway. At times it leaves you wondering how on Earth some levels can be completed, yet the compelling nature of the gameplay keeps pulling you back for another try.
My completion of Terra Lander's 1st loop on the Playstation 4
In each level the ship is spawned in a fixed point with the primary objective of reaching the landing zone, which is the only safe area where you can actually land. You'll die if you are too fast when trying to land, get shot or touch a wall/enemy, going back to the start of the stage for another fresh attempt. Other ways to die include running out of time (all levels have a predefined time limit) and running out of fuel (you'll slowly plummet to death if that happens). Just like in River Raid or Scramble, replenishing your fuel gauge is accomplished simply by destroying stationary fuel cells spread around the level. Fuel consumption is only related to the act of thrusting the ship, not firing, so there's absolutely no need to refrain from shooting if necessary.
Moving the ship around creates momentum so the closer you are to an obstacle the more careful you should be. It's interesting to see that the slower you move the more zoomed in the screen gets, as if the game was trying to bring you closer to the action for best maneuvering conditions. Controls are smooth as silk, which is absolutely necessary during claustrophobic sections. Lots of particles come off from the ship as you fly, yet the bulk of the visual spectacle is reserved for shots bouncing on surfaces, both those from your ship and those from your enemies. Despite the foreground particle feast there's absolutely no frills in Terra Lander's art design: walls and surfaces are made of sharp lines and corners, a star-dotted background is always present even when you are exploring the underground and colors are kept to a minimum to avoid distractions.
Minimalistic colors are in line with the amount of enemies you're bound to face. Since no flying opposition is to be expected, enemies consist solely of two types of turrets and the environment itself. Much like your ship's firepower, red turrets fire single bullets that travel straight ahead. Purple turrets, on the other hand, fire triangle-shaped projectiles that follow you around in arching trajectories and explode into three minor bullets after a while. Purple turrets are the worst kind of enemy and the single source of all difficult moments in Terra Lander. Shaking effects and maze-like levels with moving walls that must be opened by hitting buttons are also part of the challenge, but they wouldn't be as tough if it weren't for those annoyingly effective purple turrets. As for confusion amidst the frequent particle chaos, it's nicely avoided by the fact that all bullets carry the color of their sources (player's bullets are blue, for example).
Memorization of course represents a big part in performing better in a game like this. There are a few aspects however that definitely help in dealing with some of the toughest turret arrangements. The tiny map in the lower left corner is excellent to see every single turret or fuel tank that lies ahead, for example. Almost all turrets behind walls can be destroyed even if you can't see them on screen, all it takes is correctly using the geometry around you to bounce your shots towards them. Last but not least, and this is independent from the game's hazards of course, the rule of thumb is that it's always better to be careful than hasteful. 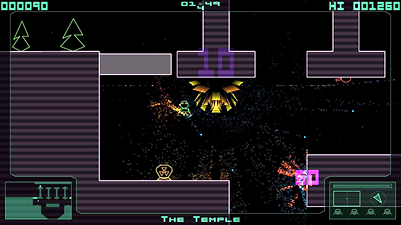 Particles everywhere!
Scoring is pretty straightforward and rewards several types of performance aspects upon level completion, with bonuses for remaining time, enemies killed, remaining fuel, fuel tanks destroyed and even how centered you are when you park the ship in the landing zone. Of course checkpoint milking is a valid "strategy" for scoring, especially when you consider that for each level completed you recover one lost life (if the life stock isn't already full, that is). Destroying all fuel tanks in a level also doubles your fuel capacity for the next stage.
Meager production values aside, my view of Terra Lander is that of an infuriatingly addictive game. Some of the levels riddled with purple turrets are definitely to blame for the infuriating part of this assessment, easily getting on people's nerves while potentially making them give up. Well, I kept going, and that's also in part due to the music, a continuous looping of the Blue Danube Waltz from Johann Strauss II. Never was a composition in the public domain so fitting for a shooter, soothing and engaging at the same time while giving you genuinely cool vibes from 2001 - A Space Odissey. Whenever my daughter saw me playing it she would mention it was the game with the "wedding music".
If there's anything Terra Lander could've done better, aside from perhaps revising the positioning of some purple turrets, is distinguishing them from red turrets in the map (they're all red). The game could've done without the robotized voice taunting you negatively after each death ("your understanding of physics is poor", "your intelect must be small", etc.). It's sort of funny up front, but when you're head on trying to figure out how to get out of level 11 it's hard not to think of them as cheap, annoying provocations. At least you can continue from the last stage reached in the start menu. There you can also apply general tweaks on control settings, vibration and audio levels.
A real ending after all the hard work to beat stage 20 would also be nice, since the game just starts anew with no breaks or congratulation message whatsoever. My best result ended in level 31 (stage 2-11) with the high score below. Hopefully soon I'll have the chance to tackle the sequel Terra Lander II - Rock Slide Rescue. It's also included in the Terra Trilogy compilation, which right now is available both in digital and in physical formats for the Playstation 4 and the Nintendo Switch. 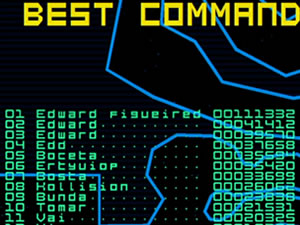