One of the most interesting and unique types of shmups to appear in the 80s is the tube shooter, a subgenre that was kickstarted by Tempest in 1981. Despite Tempest's relative success in the arcades there weren't many games produced in the same style, but from the few that followed the same path Gyruss is definitely the highlight. The arcade game would eventually be ported to several systems, with special attention to Nintendo's 8-bit platform. First released for the Famicom Disk System, soon after the game also appeared worldwide in the more friendly cartridge format.
There are obvious reasons for the special attention over a port developed for a far inferior platform. And it all boils down to the tried and true concept of gameplay, which still is the most important aspect in any video game since the day Space Invaders came to this planet. That makes a lot of sense considering the limitations of the tube formula, which is nothing more than that of a folded fixed shooter. Long story short, the improvements NES Gyruss makes over the original game are the reasons many people prefer it over the arcade version.
In fact they are both very distinct experiences, each one with specific strengths and weaknesses. There are even rumors that the NES port is based on a prototype for Gyruss II that never came to fruition (a glimpse of this can be seen in a hidden Gyruss game in Contra - Legacy of War for the Playstation). In common between both versions are the wave-based mechanics similar to Galaga and the way stages are arranged, in a journey where you must warp through the planets in the Solar System. Each stage is a warp, and in the case of the NES version you always need 3 warps to reach the next target, starting in Neptune and ending in the Sun. 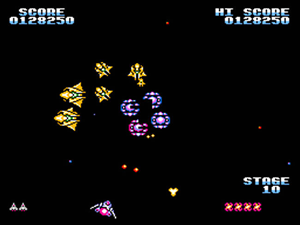 Spiralling armada ahead
A single screen in the attract mode establishes the player's mission in the game, which is – unsurprisingly – to rid the universe from evil. Only a hero can succeed in this death defying risk. Two control options are available as you start: Control A enables all directions for a full circular motion, and with Control B you can only use left and right to rotate the craft (just like in Tempest). Then you're treated with a brief animation showing your approach towards the next planet and off you go, warp after warp defeating enemies and bosses as the star-dotted vastness of space scrolls by.
Button A fires your regular shot and button B fires the "ultra-lazonic phaser" weapon (I'm not making this up, that's how the instruction manual calls it). As you face the approaching enemy waves, occasionally you'll see bonus spheres attached to intergalactic mines. Hit the spheres to get special items such as the mandatory double shot upgrade (purple). Other types of items brought by the mines include extra phaser weapons (yellow, up to a maximum of 7), screen-clearing bombs, bonus points and extra lives (1UPs). Extra lives are also obtained by scoring, the first with 50.000 points and further ones at every 100.000 points afterwards.
Bosses are one of the additions of the NES port, appearing at the end of the 3rd warp when you reach the target planets. With a few exceptions they're an amalgam of turrets that shoot out several types of bullets and get increasingly more complicated to destroy because of the overlapping attacks from the opening/closing of their hatches. That's when the phaser weapon is very useful since one blast is able to destroy two turrets if you aim it correctly. Once the boss is destroyed you enter a "chance stage", which serves as a bonus area where you can't be hit. If you manage to kill all enemies in it a special bonus of 10.000 points is granted, a reward that increases in value if you continue getting a perfect destruction ratio in further chance stages. In these levels you can also get lots of items by destroying enemies of different colors within each wave, and the game is often kind enough to give out double shot upgrades and 1UPs whenever you get there with a bare ship.
The bonuses from perfecting chance stages are the biggest contributors to the scoring system, but you're also rewarded for destroying full waves before the surviving enemies settle in the background / back of the tube. The first wave gives you an extra 1.000 points, the second 2.000 points and all further ones are worth 4.000 extra points each. Additional enemies spawning from turrets might also be included as sources of extra points, though it's probably better to avoid them in the long run if things get too cluttered.
3 warps to Pluto – it comes after Netptune here, so it's astronomically correct!
(courtesy of YouTube user Patrick So)
Besides the described additions of NES Gyruss over the arcade original, including all extra items beyond the double shot, players will also have the chance to play fresh new levels in Pluto, Venus, Mercury and the Sun, with story bits thrown in at the beginning and the end of the journey. Expect drones of different sizes and colors, as well as splitting amoebas/meteors, space bugs with protective shells, spaceships, disappearing guns, space snakes and homing fireballs. Diversity is guaranteed as you move through all of the 39 short stages, and it's interesting to note that in sound terms this version of  Gyruss feels a lot like a Gradius game. A few explicit nods in the gameplay are also very much welcome, such as the Salamander-like boss at the end of stage 19.
With so much going on at times a little bit of slowdown and flicker is inevitable, and for an obvious better performance of the system the screen info disappears completely during boss fights. Fortunately there's nothing really troublesome about these limitations. What's certain is that due to the several alterations in the core game NES Gyruss is an easier challenge than arcade Gyruss. Besides the breathers you come across along the way, in the NES it's much easier to destroy enemies in the distance even with a single shot, whereas in the arcade original losing double shot leaves you in severe trouble later on. I'm fond of both versions equally.
The second loop increments the challenge with a few more enemy bullets per warp and more aggressive bosses, which start throwing out spiralling patterns instead of single fixed spreads. A full run of the 39 levels takes roughly 40 minutes, so once you learn the game completely you can expect to play marathons in order to increase your score. My best result below ended in stage 3-5, playing with Control A. 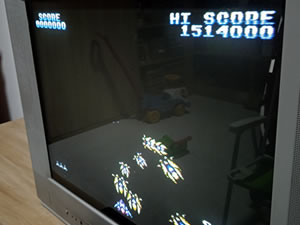